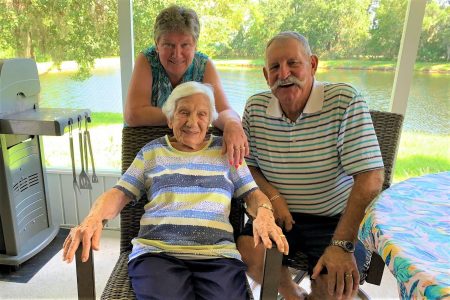 It’s always a big deal when a person reaches age 100, but it’s absolutely amazing when an individual reaches 106.

Ruskin resident Theresa Francis will reach this milestone tomorrow, Aug. 27, much to the delight of her daughter, Patricia Godfrey, son-in-law, Howard Godfrey, and her friends at Cypress Creek Assisted Living.

Francis was born in Queens, N.Y., in 1915, when Woodrow Wilson was serving his first term as the country’s president, and World War I was underway in Europe. The cost of a loaf of bread was 7 cents, and the median home value was $3,200.

Since then, the centenarian has lived through every war and conflict in which the United States has been involved; 18 presidents; untold inventions; the introduction of computers and the Internet, the Spanish flu and, thus far, COVID-19.

In October of 1946 she married Paul Francis, a Navy sailor who had been on the U.S.S. Oklahoma during Pearl Harbor and survived the Japanese sinking of the ship. Residing for many years in upstate New York, the couple moved to Holiday in 1981.

They were together 53 years until his death in 1999 and had one daughter, Patricia.

Francis moved to Sun City Center in 2010, initially renting a duplex. She began having balance issues at age 99 and experienced a series of falls that broke her right arm, left arm, wrist and nose.

The final straw, her daughter said, was when Francis broke her hip at age 101.

“I told her we couldn’t do this anymore, so we moved her to Cypress Creek Assisted Living Residence,” she recalled. “They were wonderful.”

For her age, Francis is doing remarkably well. She’s still ambulatory (with the help of a walker), coherent and independent, Patricia Godfrey said.

“She only needs help showering and with the disbursement of medications,” she said. “We chat on the phone every night about how her day went.”

She loves the Hallmark Channel, and since she can no longer read, due to macular degeneration, spends her time watching TV, walking in the Cypress Creek ALF gardens and attending Catholic services at the residence. She loves going for pedicures and dining with the Godfreys at Fiore’s, her favorite restaurant.

“She’s just a marvel,” her daughter said. “I have to run to keep up with her.”

To which Francis replied with a smile on her face, “She’s telling all my secrets.”