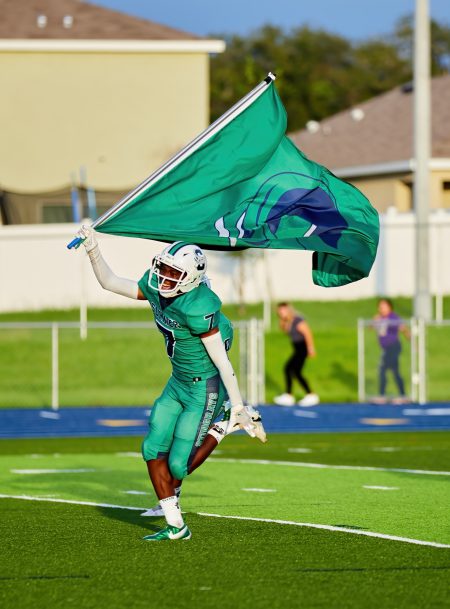 The 2021 high school football season opened last Friday night. The five South Shore gridiron teams were paced on the field by Riverview and Lennard victories in kick-off classics. Winding up on the losing, and scoreless, end were Spoto and East Bay. Due to severe lightning in the area, the other South Shore football squad, Sumner High, had its game cut short with only minutes remaining in the first quarter. That game will not be made up.

All five high schools pick it up again this Friday night with regular season games at 7:30 p.m. Lennard welcomes the Newsome Wolves to Ruskin. All other South Shore schools hit the road. East Bay looks to get over its opening disaster in Tampa against Robinson High. The Riverview Sharks are looking for win number two, facing King High in Tampa. Coach Alfred Smith’s Spoto Spartans are looking for that first victory by grappling with Leto High in Tampa. Sumner hopes to break the ice in the win or loss column, tangling with always tough Durant High, over near Plant City. 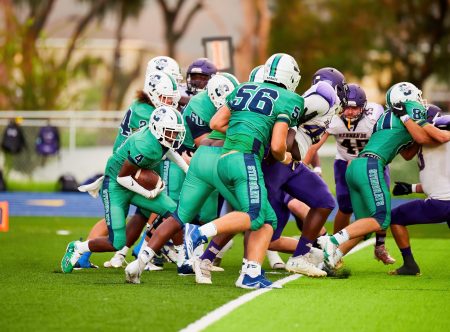 Riverview, under Coach William Mosel, cruised past Spoto 22-0 last week. The Sharks plan to maintain their offensive and defensive prowess at the expense of King. East Bay, under new head coach Mike Gottman, is working hard during this week’s practices to turn the tables on Robinson after last Friday’s second-half collapse in its 41-0 whipping from the Lakeland Dreadnaughts. Spoto is also working to get some offensive mojo with Leto, after being shutout by Riverview last week. Sumner’s head coach Alonzo Ashwood and his Stingrays just want a break from the weather so the second-year team can get its game in this coming Friday evening. That leaves Lennard. Coach Matt Kitchie saw his Longhorns erupt to an early lead over Braden River last Friday. The Lennard fast-flying offense went to sleep after jumping out to a lead, but that provided the defense the opportunity to keep the contest in the winning column, which they did, 21-16.

Lennard was hosting Braden River out of Bradenton. First impression at the Longhorns’ corral Friday night was the new, beautiful green turf. No sooner had the crowd settled in than Lennard received the opening kickoff. On only the fourth play of the game, Lennard senior quarterback Gavin Henley took an option play around end for a 55-yard touchdown. Tony Loschavio booted the point after to make it 7-0.

Coach Kitchie went for the juggler early, calling for an onsides kick. The place kick surprised Braden River and was gathered up by the Longhorns in BR territory. From the BR 45, senior running back Chauncey Jones bulled his way time after time down to the BR 19 yard line. From the red zone, QB Henley showed his arm with a TD connection to junior wide receiver Eli Singleton. A repeat Lochiavo extra point boot made it 14-0. It appeared this would be a one-sided game.

Lennard continued its dominance. The Horns D forced a three and out punt. 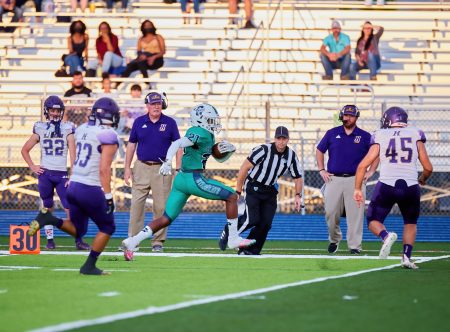 A 20-yard punt return by senior wide receiver Ha’keem Monroe gave the Horns the ball once again in Pirate territory at their 49 yard line. This scoring drive was highlighted by a sneaky double pass play from Singleton to junior wideout AJ Hills for 41-yards. The Horns were knocking once again, this time inside the Pirates 10-yard line. From there Henley found Monroe for a 9-yard TD pass. Once again the PAT was made good by reliable kicker Loschiavo, with Lennard 21 and Braden River 0.

The Pirates finally started getting on track, using up most of the entire second quarter clock with a long sustained 17-play drive, capped by a three-yard TD scoring run. Braden River now had new life, trailing 21-7.

A penalty-filled drive led the Horns to punt. An errant snap went over the Horns punter’s head out of the back of the end zone for a safety. Now, the Pirates’ comeback had made it 21-9 in favor of Lennard.

Playing like a new team, the Pirates struck again with a pretty run-fake, leading to a seam route for a TD pass to its tight end for a 45-yard TD reception.

Braden River had dominated the second quarter. Now it was 21-16, Horns. It was halftime. All scoring had ended, and it came down to defense.

In the second half, although the Horns moved the ball with bruising runs by chunky RB Jones, catches by Monroe, Singleton and tight end Tyler Russell, they were stopped on fourth down three times in the second half inside the Pirates red zone.

Fortunately, the Pirates also were not able to punch in any more points, due to solid defensive plays by senior linebacker Dominick Murphy and senior defensive end Jacob Treese, a few tackles for losses from sophomore Lleydon Brush and a sack by Braylon Henry. The Pirates’ last pass was intercepted by Lennard defensive back Labrox Mention, which then prompted victory formation for Henley and the Horns.

Sumner High School, under the leadership of Coach Alonzo, kicked off its second season of Stingray football against the Hernando Leopards with hopes of replicating or improving its 7-1 inaugural season record. The game was scoreless before lightning caused play to be suspended with about a minute left in the first quarter. The crowd energy felt like that of a mid-season game, and the Sumner fans are going to be loud in their support for their Stingrays.

Sumner won the opening coin toss and chose deferring to the second half, putting its defense out to face the Hernando offense to begin the Stingray’s season. The action got underway with a Sumner squib kickoff to Hernando, who misplayed the ball with Hernando’s winning the battle to recover the loose football. The Stingray defense was strong on the weather shortened night, holding Hernando to only two yards in nine plays, which included a sack each for Keoni Denny and Jordan Knowles. Braxton Maenza got the nod at starting QB for the Stingrays and was one for four passing for 14 yards, and the running game accounted for 40 yards on six rushing attempts, led by running back Devin Spencer.

Sumner had started to put together a drive when the weather necessitated the need to take cover from the storm. Sumner had moved the ball to pick up a first-down just before the play was suspended. There is no make-up scheduled for the Stingrays and Leopards to resume the suspended game. Sumner now opens its regular season play on the road, Friday, Aug. 27, at 7:30 p.m., for a non-district matchup vs. Durant.

South Bay Hospital thanks its caregivers with space for respite, renewal