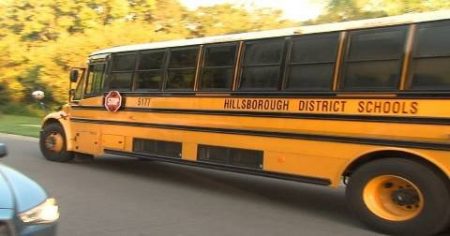 The critical need for school bus drivers, lunchroom workers and substitute teachers continues as Hillsborough school officials battle the corona virus in a state that has become the epicenter of cases nationwide.

“It’s a huge problem for us right now,” said Chris Farkas, chief of operations, about the bus driver shortage. Farkas made his comments at the Aug. 12 school board meeting, six days before an emergency meeting was scheduled to address a dramatic increase in quarantined students and employees.

Superintendent Addison Davis at the Aug. 12 meeting pleaded with parents to help keep the numbers in check by scanning daily for symptoms and keeping sick children at home. From Thursday, Aug. 12 through 7 a.m. Monday, the number of students quarantined or in isolation jumped from 2,933 to 5,599. The employee count rose from 281 to 316.

The emergency meeting was to address ways to mitigate the spread of the virus “up to and including mandatory face coverings for all students and staff.”

Davis at the Aug. 12 meeting also noted the critical need for substitute teachers to cover for sick educators.

“Right now, the fill rate currently is more than 57 percent,” Davis said. “We know that is not an attractive number. We’re leveraging school-based coaches and also district staff to be able to go in and fill positions.”

Indeed, even school board members indicated they would be willing to step in as necessary after an Alonso High School teacher asked that they commit to cover for teachers who plan to take personal time off to recognize the upcoming Rosh Hashanah and Yom Kippur religious holidays in September.

As Florida maintains its position as the epicenter of the country’s corona virus pandemic, tensions remain high as the highly contagious Delta variant triggers a surge of cases that is unprecedented for Hillsborough County residents since the pandemic kicked off some 17 months ago.

This was apparent in public comments offered at the Aug. 12 meeting, which plays against a backdrop of increasing divisiveness in a state led by a strong-minded governor who rules against comprehensive mask mandates as the medical community steps up in support of stricter safety protocols.

In a letter signed by more than 800 Florida physicians, including 139 in Hillsborough County, the issue of local control of public schools again took center stage.

“Blocking communities from making local decisions to protect themselves with his top-down, one-size-fits-all edict will only make matters worse,” the letter reads, in reference to the executive order DeSantis signed that bans all-encompassing mask mandates.

The letter calls for DeSantis to “resume reporting COVID-19 data in full,” to “do much more to get vaccinations in people’s arms” and to “repeal his reckless executive order and encourage local school districts to implement safeguards, such as mask-wearing, that can minimize COVID-19 spread.”

Hillsborough schools opened with a mask mandate that required students to wear masks unless they opt out with a letter signed by their parents or guardians. As of Aug. 12, Davis reported, the opt-out rate for students was 14.5 percent.

According to the second-day enrollment count, schools opened with 194,938 students, an 11 percent increase over the third-day count a year ago. The number of students attending charter schools remained steady at 14 percent, which this year accounts for 27,188 students.

Some speakers at the Aug. 12 school board meetings argued the school district’s mask mandate goes too far while others raised concerns it does not go far enough.

“My son is being robbed of a traditional school experience,” said a mother who is homeschooling her five-year-old son due to the mask mandate. “I refuse to enroll him in a school unmasked where I can receive a phone call at any moment that he has to be quarantined because he was not wearing a mask. Yet the parents of children who are wearing masks, mostly worn incorrectly, get the choice to continue sending their children to school.”

Another parent said she believes the policy is “discriminatory against students who have natural immunity as opposed to vaccine-induced immunity.” A third parent, who believes “society is barreling towards a post-truth reality world,” argued against what she calls board action “to usurp a basic human right — breathing.”

As for a counterpoint, one parent asked for the mask mandate to go further, given that his son is too young to get vaccinated.

According to the Hillsborough County school district’s online COVID-19 dashboard, there were 8,771 confirmed cases from March 2020 through Aug. 1. From Aug. 2 through Aug. 16, another 929 cases have been reported, including 577 reported since Aug. 10, the first day of school. Overall, students represented 62.1 percent of the new school year’s total.

As of Aug. 14, the County’s testing positivity rate was 23.37 percent, according to a report compiled by Hillsborough County health officials. Hospital and ICU occupancy rates were at 85.89 and 77.02, respectively.