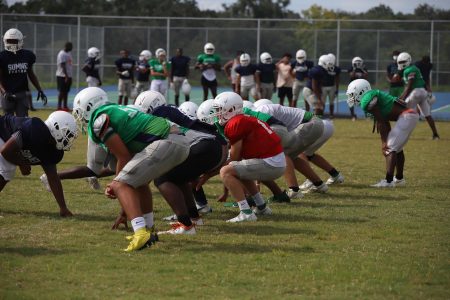 Francis Fedor Photo
Sumner High School varsity football under the leadership of Coach Alonzo Ashwood prepares for their second season and their first full varsity schedule on the first day of the 2021-22 school year. Sumner will open with a Kickoff Classic game vs the Hernando Leopards on Aug. 20 before opening the regular season on Aug. 27 against Durant on the road.

Hope springs eternal as the five high school football teams in the South Shore prepare for Kick-Off Classics this Friday night, Aug. 20, at 7:30. The classics mark the opening salvo for the 2021 high school gridiron season. All five teams have an abundance of enthusiasm and optimism as they all open the season 0-0 with chances and hopes of improving on last year’s records.

Sumner High opens its second football campaign with the Hernando Leopards. The Sumner Stingrays had a 7-1 season in its initial foray last Fall. Playing in 6A-D12, Sumner has a tougher schedule this season. However, the Stingrays can play seniors this year as well as other underclassmen. Hernando comes from Brooksville to Sumner for both teams’ debut. The Leopards put together a 7-2 record, including a split in the post-season playoffs. Sumner travels Aug. 27 to Durant for a stern test in Plant City with a team that steamrolled Sumner last season.

The Lennard Longhorns strap it up at home for a Friday night clash with Braden River. The Longhorns compiled a 4-5 skein last year. Coach Matt Kitchie has some good backs and receivers coming back but needs to work on the Longhorns’ offensive line and defensive line. Braden River’s Pirates went 4-4 last season with a potent offense. Lennard plays this season in 7A-D11 and hosts game two, also at home, Aug. 27 versus Newsome High of Lithia. The Wolves were very good last year, going 8-3.

East Bay High School Indians open up their new season with a new coach and new expectations. The Indians hope to parlay the enthusiasm and uniqueness of new head coach Mike Gottman. Gottman has several key veterans returning from last year’s 2-7 squad. The top returnee is probably quarterback junior Nick Carter. Carter is a big kid who can run and pass. At 6-2 and 240 pounds, Coach Gottman will not hesitate to put Carter on the field for some defensive work at linebacker, also. Coach Gottman explains that East Bay needs to score more points and yield a lot less than last season. East Bay stays on the road for its first two games, against Robinson and Strawberry Crest. The Indians launch their home season on Big Bend Road Sept. 10 versus the Riverview Sharks and then host Alonso Sept. 17.

Spoto and Riverview, the other two South Shore teams, play each other in the Aug. 20 Kick-Off. Kicking off at 7:30 p.m. at the Riverview High stadium, the 4-4 Spoto Spartans under Coach Alfred Smith tackle the Sharks. Spoto plays at Leto Aug. 27 before welcoming Alonso to the Spartan Stadium for its Sept. 3 home opener. Riverview could only garner one victory last year, so Coach William Mosel is working hard to achieve that in the opening week. The Sharks travel to Tampa to face King High Aug.27 before coming home again to face Middleton Sept. 3.