Walk to Remember fundraiser for Crisis Center of Tampa Bay set for Aug. 21 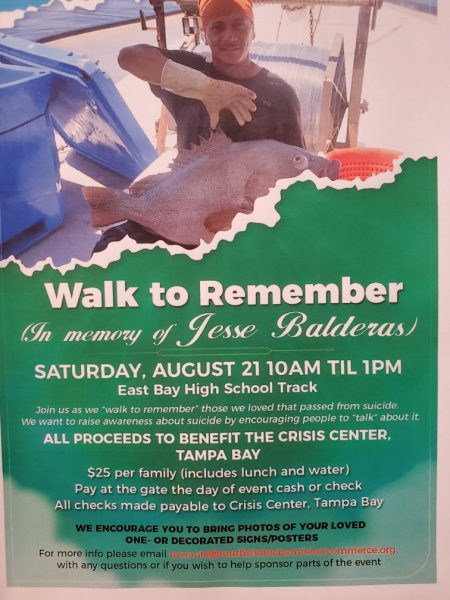 Walk to Remember fundraiser for Crisis Center of Tampa Bay set for Aug. 21

Corina Meza questions herself every day as to why her fiancé, Jesse Balderas, chose to end his life three years ago. Like so many others who have lost someone to suicide, she just didn’t see it coming.

They had been together 18 years, had four children together and were raising her three kids from a previous marriage at their home in Ruskin. The children ranged in age from 6 to 16.

Balderas died on his 42nd birthday, Aug. 22, 2018. And although he’s gone, it’s something she and the children have to live with forever.

“Some [days] are much worse than others” Meza said. “His birthday and the anniversary of his death are always especially difficult.”

Despite their suffering, Meza wants to shed light on the darkness of suicide for others through the Walk to Remember (in memory of Jesse Balderas). It will take place from 10 a.m. to 1 p.m. Aug. 21 at the East Bay High School Track, 7710 Big Bend Road, Gibsonton.

The event is a fundraiser for the Crisis Center of Tampa Bay, which is part of the National Suicide Prevention Hotline network. Calls in Hillsborough County and overflow calls from other areas ring into the local, nonprofit call center 24/7, 365 days a year. Its highly trained staff help folks in crisis dealing with sexual assault/abuse, domestic violence, financial distress, substance abuse, a medical emergency, suicidal thoughts and other emotional or situational problems. The Tampa center manages 10-to-15 suicide-related calls out of the 200 to 250 total calls it receives each day.

Monies raised in the Walk to Remember (in memory of Jesse Balderas) will supplement government funding and community donations for its 24/7 operation, said Clara Reynolds, Crisis Center of Tampa Bay CEO.

Reynolds said many of the people thinking about suicide right now are worried about the eviction moratorium, resurgence of COVID-19 and the start of school and the safety of their children.

The $25 cost per family to participate in the walk is payable at the gate by cash or check made out to the Crisis Center of Tampa Bay.

“It’s to honor Jesse and all those who have passed by suicide,” Meza said. “So many people have lost their lives, and I felt it was time we all started talking about it.”

Melanie Davis, executive director of the SouthShore Chamber of Commerce, is helping Meza plan the event. She feels the walk’s a good start.

“It’s therapeutic for families [who’ve lost a loved one to suicide] to participate in a walk like this and talk about the many things that are left unanswered,” she said. “My beloved brother-in-law used to say, ‘Suicide is a permanent solution to a temporary situation,’ yet we lost him two-and-a-half years ago when he took his own life. We never know what people are thinking or feeling.”

Davis encourages people to show up with an enlarged photo of their loved one or a poster with a photo on it to honor them.

Balderas was a commercial angler who was born in Tampa and raised in Ruskin. He attended East Bay High School in 9th and 10th grades, Meza said.

According to the Centers for Disease Control and Prevention, suicide was the tenth leading cause of death overall in the United States in 2019, claiming the lives of more than 47,500 people. It was the second leading cause of death among individuals ages of 10 to 34 and fourth among individuals between the ages of 35 and 44. There were about 2.5 times the number of suicides (47,511) in the United States that year as there were homicides (19,141).

If you’re in crisis, call the toll-free National Suicide Prevention Lifeline at 800-273-TALK (8255). It’s open 24 hours a day, seven days a week and is available to anyone.

For more information on the walk itself, email melanie@southshorechamberofcommerce.org/.

Schools open as tensions rise over masks and the Delta variant