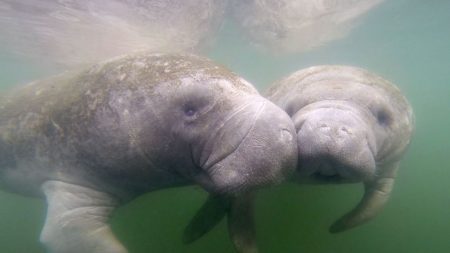 The latest 2021 outbreak of Red Tide is on its way down in Tampa Bay on the coasts and bays of Hillsborough County. But the Red Tide, in addition to being a lethal threat to salt-water fish, is also a threat to mammals in the Tampa Bay area. The mammal most threatened by the Red Tide is the much-loved and adored manatee. Already threatened by habitat destruction, by pollution, by capture in fisheries targeting other species, by boat collisions, boat propellers and by pollution, a recent surge in manatee deaths is thought to be related to the 2021 Red Tide.

According to the Florida Fish and Wildlfie Conservation Commission weekly report, the Red Tide has dropped back to “low” in Tampa Bay waters bordering Hillsborough County. The two beaches ordered closed in Hillsorough County have re-opened with the latest decline [in] killings and odors of the Red Tide threat in this specific area. The public again has access to E.G. Simmons State Park Beach in Ruskin and the Apollo Beach Nature Preserve areas after Hillsborough County closed both in early July due to the massive fish and marine life deaths resulting from Red Tide.

However, the Florida F&W reports that manatee deaths have increased in the Tampa Bay area in the last six weeks. Officials suspect eight of the nine manatees found dead in the area recently are probably victims of the recent Red Tide rampage. Manatees are close to falling into the dangerous category of “vulnerable extinction” due to the recent deaths, not only in the Tampa Bay area but statewide. The Red Tide can cause severe breathing difficulty for the manatee, which needs to come to the surface at least every 20 minutes in order to breath air. Red Tide also leaves its poisonous signature in the manatees’ seaweed diet.

The latest bad news for the overweight mammal, known as the “cows of the sea” or by their scientific name, “Trichechus manatus,” is no viewing of the lovable mammal by admirers at the Manatee Viewing Center in Apollo Beach. The MVC has been closed now since mid-2020 due to the covid pandemic. No reports indicate when it will re-open again, although Nov. 1 has been provided as a tentative date. Located next to the gigantic TECO plant, its warm discharge waters attracted the manatees who frolicked and enjoyed the waters of Tampa Bay. Now it is difficult to even spot a manatee anywhere in the South Shore. More manatees have died already this year than in any other year in Florida’s recorded history, primarily from starvation due to the loss of seagrass beds.

The Florida Fish & Wildlife Conservation Commission reported that 841 manatee deaths were recorded through July 2. That breaks the previous record of 830 that died in 2013 because of an outbreak of the toxic Red Tide.

Schools open as tensions rise over masks and the Delta variant