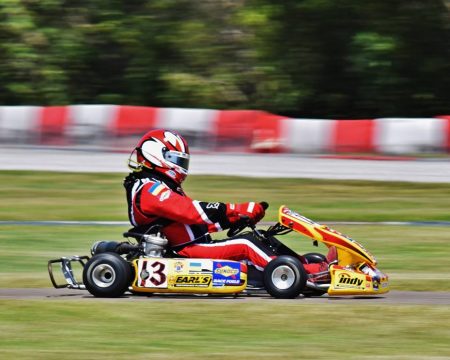 Jonathon Sharkey gets in a few laps as he plans for a Veterans Racing League in the South Shore. Any military veterans interested in participating should contact Sharkey at jonathontepes@yahoo.com/.

A South Shore man continues his indefatigable entrepreneurship, trying to get back to the so-called “normal” pace of the pre-Covid days. Jonathon Sharkey had all the details in place back in the late fall of 2019 for a go-kart racing league experience for military veterans.

However, Covid roused its ugly demeanor. All plans and dates for the racing league were suspended, due to the ravishing effects of Covid 19 prior to the apparent successful introduction of the vaccines. Now, Sharkey anticipates renewing his efforts to once again attempt to start the go-kart racing league for interested military veterans. Announced last month, Sharkey is currently hard at work on re-establishing the groundwork to make a reality of the league in August or early September.

Sharkey, like many others, does not know when or if “normal” will return or when the Covid 19 pandemic will be over and in the dust bin of history. With the tremendous drop in Covid 19 cases and deaths since the inception of the vaccines, many thought Covid 19 was terminated. The return to normal was in sight, just around the corner. But the Delta variant version of Covid has emerged. However, Sharkey is moving forward on plans for the veterans racing league.

Sharkey explained last week that he has sponsor support re-aligned for his proposed veterans racing adventure. The contemplated site is the Ambassador paved oval out in rural Balm on County Road 672. Sharkey says a large number of military veterans live in Hillsborough and neighboring counties and would find the go-kart racing an activity that would provide excitement and satisfaction. When Sharkey had all but the final plans ready to debut originally, some 20 months ago, Sharkey told news media being a member of the U.S. Army was the biggest rush of his life until he started racing.

“Racing just psyches you up; you are like, ‘wow’; you feel rejuvenated; you feel like ‘I can take on the world’; you feel invincible; nothing is going to stop me,” commented Sharkey.

Now, it is back to the drawing board for Sharkey, who is looking for interest once again from military veterans who want to have some fun and find some social contacts” after the Covid 19 shutdowns, despite the recent insurgence of the Delta variant.

One of Sharkey’s primary collaborators back in the pre-Covid days was Ray Garcia, who owns and operates the paved oval track with bleachers where the league could hold racing events. Garcia not only maintains the first-class track but runs the Ambassador Racing School, which provides an entrée for any veterans eyeing the racing experience.

No experience is necessary for a veteran, just the desire to try something new and exciting, Sharkey expressed to potential newcomers through news media. One veteran who is ready for Sharkey’s rejuvenation of a veterans racing league is William Cox.

The 72-year old Cox of Sun City Center is looking forward to Sharkey’s getting re-started. Commenting to news media just prior to the 2019 beginnings of Covid 19, Cox said, “I’m a big Formula 1 fan, and I was a NASCAR fan, Indi 500 fan and here I am,” said the veteran. According to Cox, hitting speeds of 50 mph around an oval opens up a whole new outlook on life.

“It cuts the decades off, not the years, the decades; when I get out of the kart after racing, my heart is pounding; I feel young; I’m ready to roll; it’s great,” Cox enthusiastically told news media.

Cox, similar to Sharkey, said vets need this kind of outlet; [it is] positive and good for military veterans.

“It’s always nice to cross the finish line with your fellow comrades. Win or lose, everyone takes a victory lap,” Cox says, describing the social network the veteran rookie-racers develop.