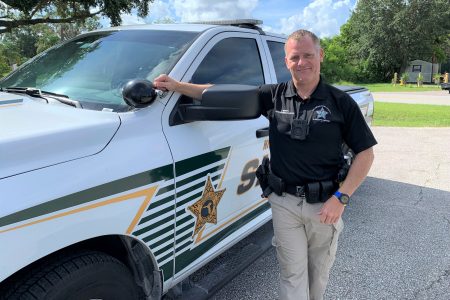 LOIS KINDLE PHOTO
Community Resource Deputy Jeff Merry urges residents who get a call from anyone asking for money to phone him, a family member or friend, regardless of how “official” the call seems.

An elderly Sun City Center woman recently was led to believe she was aiding her granddaughter by a scammer posing as a “public defender.” Before realizing she had been duped, she lost her retirement income, a total of more than $700,000 over a period of about 40 days. As a result, the 82-year-old victim will now have to go live with her family.

The con started with an initial contact May 10, when the crook called to tell the woman her granddaughter had been involved in a traffic accident and was charged with reckless driving. A court date was set for June 14, and she needed to send $18,800 to cover the cash bond. The victim sent it via priority mail.

On May 12, the “attorney” called to report a gag order had been placed on the case, and the other occupant woman had medical bills totaling $32,000 and wouldn’t press charges if cash was sent via FedEx.

On May 14, he called again to report her granddaughter wanted to hire her own attorney, and she needed a $20,500 retainer.

By May 17, the SCC woman received yet another call. This time, she was told the other driver had allegedly developed a blood clot, which required another $35,600 in ICU bills. The next day, it was $64,600 for physical therapy and was reminded about the gag order.

On May 27, she “learned” the city council needed $98,500 to pay for property damages done resulting from the traffic accident, on June 10, another $99,000 for more public damage.

Almost a month went by before she received another call. This time, the scammer said the other driver was now disabled. The grandmother needed to send $150,000, and on July 8, another $150,000 for final restitution.

Drained of resources, the octogenarian then reached out to her son and granddaughter, only to learn she had been scammed. Continually reminded about the gag order, she had kept quiet. If anyone asked, she was told to say she was remodeling her home.

“She was devastated, embarrassed and couldn’t believe someone would do this to her,” said Community Resource Deputy Jeff Merry. “More than likely, (since all of the transactions were cash) we will not be able to get any of the money back.”

Merry is all too familiar with this kind of scam and others, and it’s not the largest loss he’s seen in the area. A romance scammer took $2.3 million from a local senior between 2017 and 2018. In 2020, victims in greater Sun City Center alone lost $3.5 million.

“I’ve had people say they would never fall for any kind of scam, and then they do,” he said. “These criminals excel at what they do. They’re skilled manipulators who thoroughly plan and develop very complex scams.”

Sometimes, he said, the scams are done under the guise that the scammer was referred by a friend.

Merry said his office gets calls every day, about phone calls, emails, online messages or letters that are scams. He estimates about 30 percent of the people who receive them, unfortunately, fall prey to these criminal solicitations.

“If you get one, phone a family member or friend,” Merry said. “Don’t keep the details to yourself. You can even call or email me to talk.”