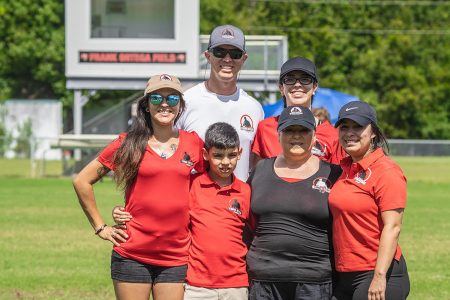 The first annual Coach Frank Ortega Foundation girls flag football tournament was held to a resounding success on a recent weekend in July.

Frank Ortega passed away from COVID-19 Sept. 14, 2020. He grew up in a single-parent home with his mother, who was a migrant worker, working all over the US to make a living for Joshua’s dad and aunt. They barely had enough to live. With that, Frank Ortega was never able to take on youth sports. 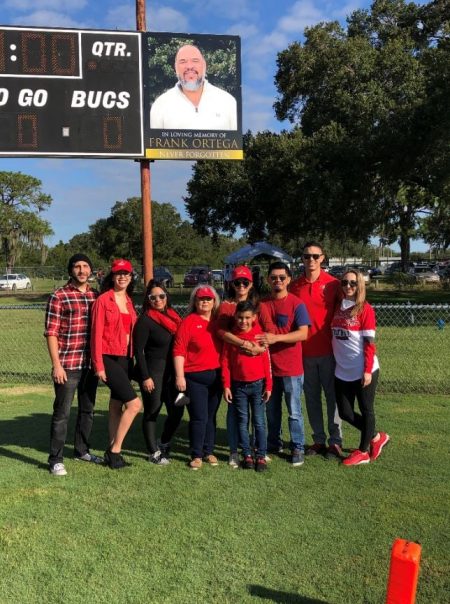 Recognizing the dedication and loyalty he had for the East Bay Buccaneers throughout his many years of service with them, the organization has renamed its playing field to be forever known as “The Frank Ortega Field at Vance Vogel Park”.

Once he got into high school in Texas, Frank convinced his mother to let him live with a friend and his family for four years. That’s where he was able to play football and become a state-contending track athlete. After Frank graduated high school, he decided to join the Marines. He was honorably discharged after his first enlistment.

Frank Ortega then settled in Ruskin, Fla., and started to coach at Ruskin Recreation Center. After coaching there for a few years, he decided to coach for the East Bay Buccaneers. The East Bay Buccaneers Youth Football and Cheerleading League Inc. is a Florida non-profit organization that sponsors youth cheerleading for ages 5 to 15 and full contact football teams for ages 5 to 14. The organization is a member of the Tri County Youth Football & Cheer Conference (TCYFCC). All coaches and board members are unpaid volunteers. Ortega spent the next 20 seasons as a coach, trustee and board member for the East Bay Buccaneers. Eventually, he was voted as the vice president for TCYFCC, a position he held until he passed away. 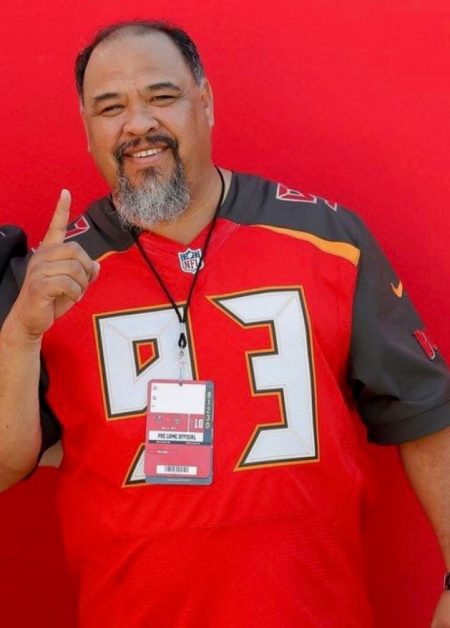 The reason why Frank Ortega got into youth sports was to help kids with an opportunity that he didn’t have. He wasn’t able to grow up with youth sports but knew how important sports are in a child’s life. Ortega knew what it was like to be part of a family that struggled financially and the stress it caused parents with multiple children. Being on the board of directors for the East Bay Buccaneers, Ortega knew what families needed help financially in order to sign their child up for youth sports. Instead of turning families away, he would offset the cost by using his own money to pay off the debt. He would see some kids that wouldn’t have the proper cleats to play football and told his son Joshua’s stepmom, Melissa Ortega. She would then buy cleats for those kids. They never asked for any recognition or wanted to be known for doing these great deeds. They did it because it was something they were able to do. 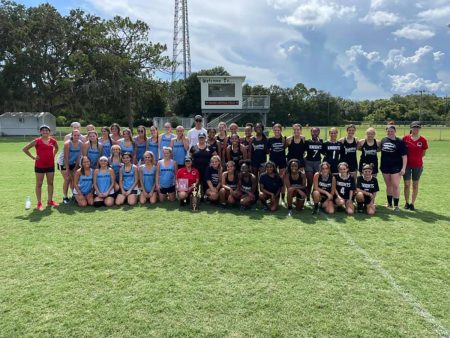 According to Joshua Ortega, Frank’s son, “When my dad passed away, Wayne Dennis, former president of the East Bay Buccaneers, called me and told me that they would love to name the game field after my father. My family and I were shocked and honored by this gesture. It truly showed that the organization loved my dad as much as he loved the organization.”

Joshua goes on to explain why the Frank Ortega Foundation was started. “The reason why my family and I decided to start this foundation was because of the values my dad taught us. He showed us that if you’re able to help those who have less, then do so, not because you have to but because it’s the right thing to do. Everyone deserves an opportunity to do something they love, especially youth sports. The foundation was established to continue what my dad started and that’s to offset costs to youth athletes’ for the East Bay Buccaneers for families with hardships. We are also awarding two high school senior student athletes (one male and one female) a $1,000 scholarship towards higher education after high school.”

The July girls flag football tournament was held to raise money towards scholarships and offsetting costs for youth student athletes. The teams that played are AAU teams that are made up of girls from local high schools. Teams that play for high schools such as Lennard, Sumner, East Bay, Riverview, Newsome, Robinson and Alonso participated in this event. Also, teams traveling from West Palm Beach and New Smyrna Beach participated as well. These young ladies competed for two straight days and played some excellent flag football. The Frank Ortega Foundation raised approximately $2,000 for the foundation.

For more information on the foundation and to donate, go to coachfrankortegafoundation.org.