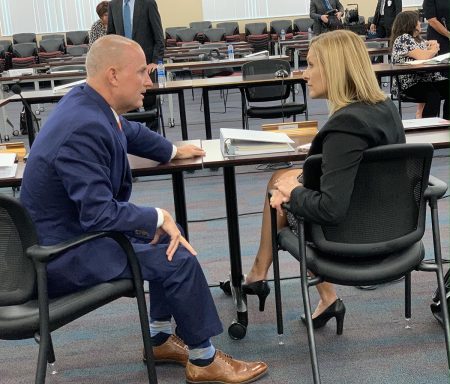 State education officials have forced the hand of Hillsborough County school board members who, in turn, reversed their votes to effectively close four charter schools.

At issue were denied contract renewals for Pivot Charter School, SouthShore Charter Academy and Kid’s Community College Charter High School in Riverview, along with Woodmont Charter School in Tampa, which the Hillsborough County school board approved at its June 15 meeting.

The board voted July 20 to renew all four contracts.

“It’s never gotten to that point in the history of our state in the modern era,” said Florida Education Commissioner Richard Corcoran, in reference to the June 15 votes not to renew the charter contracts, which Corcoran called “just lawlessness.”

Indeed, that also was the consensus of the appointed state board of education members, who sided with Corcoran at their July 14 board meeting at the Seminole campus of St. Petersburg College. In effect, they told Hillsborough school board members to reverse their decisions or face the consequences, which Corcoran detailed in a letter, dated June 23, to Addison Davis, Hillsborough superintendent, and Lynn Gray, school board chair.

The letter noted that a finding of probable cause that a school board fails to comply with its statutory duty “could result in the state board imposing serious consequences,” including the withholding of state funds and discretionary grant and lottery funds.

Such a finding was presented to the state board of education in July, written by Matthew Mears, general counsel for the Florida Department of Education.

Among his findings were that the Hillsborough school board broke the law by failing to provide adequate notice of nonrenewal and that the school board failed to make student academic achievement the most important factor when determining whether to renew.

“The state alleged you violated the law; that does not mean that you did,” Porter said. “Our firm position is that the superintendent, the charter office and this board acted squarely within the confines of the law.”

Had the school board not acted to rescind its nonrenewable votes, the matter would have been addressed through the court appeals process as lawsuits were filed on behalf of each of the affected charter schools.

With the July 20 vote to rescind, that costly judicial reckoning was averted, which is one of the main reasons the Hillsborough board responded to the state’s threat of punitive financial action. As Porter noted, Hillsborough faces a state financial receivership should its fund balance fall below 2 percent. To avert the unprecedented takeover, the board approved and presented to the state a financial recovery plan.

Hillsborough is being closely monitored to ensure that its fund balance does not drop below the threshold, which it most decidedly would if officials were to withhold state funding, which Porter said would amount to $950 million, according to district figures.

That state officials continue to threaten withholding funds does not sit well with some Hillsborough school board members, who said they liken the action to losing local control of public schools.

“I see a pattern developing where the state threatens to withhold funding whenever we make a decision they don’t like,” said Jessica Vaughn, elected to the Hillsborough school board in November. “I think we have to have a long conversation and a long look at how often we’re going to roll over [to] the state every single time they threaten us that they don’t like the decisions we make locally and threaten to withhold our funding.”

Hillsborough school board chair Lynn Gray said a workshop to address the future of public schools will be held in the months ahead.

“I know that many of you are passionate about this situation; some may call it a battle,” said Melissa Snively, who was elected to the Hillsborough school board in 2014. “These decisions about charter schools, the laws, the statutes about charter schools are developed and made by our state legislature, and so for us to supersede that or control the law is not within our purview as local school board members.”

The Hillsborough school board voted 6-1 to comply with the state board of education’s order to renew the four charter schools and to settle the four appeals that had been filed. Vaughn cast the sole dissenting vote.

The board also inquired about the school district’s monitoring protocols for the four newly renewed charter schools, in light of deficits noted in reports that led to both the original votes not to renew and the appeals filed in protest. Also raised was concern for the school district’s 39 designated failing schools, which Snively said is the reason superintendent Addison Davis was hired last year, to turn around those schools. She also raised concerns about exceptional student education (ESE) in both public and public charter schools.

A charter school is a public school of choice, developed by a private, nonprofit group using public funds to serve public school students in a given community. Charter schools are guided by a governing board and operate under a charter contract with their sponsor. This frees charter schools from many of the regulations that affect traditional public schools but not the accountability requirements, such as producing financial reports and positive academic results. Failure to live up to charter specifications can lead to 90-day closure requirements, charter non-renewal or immediate closure due to life and safety issues.

To view Hillsborough school board meetings and transcripts, visit: www.sdhc.k12.fl.us. For information on the July 14 state board meeting, visit the Florida Department of Education at www.FLDOE.org and search for “July 14 board agenda.