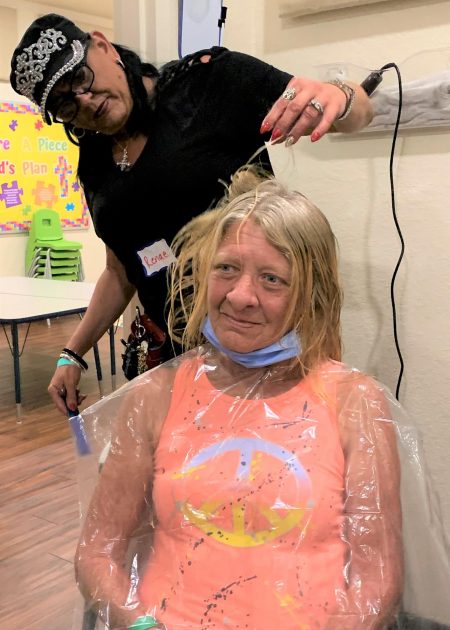 More than 100 volunteers and representatives from an estimated 35 state, city and county agencies, nonprofit organizations, area businesses and a local church recently gave their time and resources to homeless folks living in South Shore.

The highly organized Homeless Outreach took place from 10 a.m. to 1 p.m. July 16 at Bell Shoals Church in Apollo Beach. Hosted by the church, the event was coordinated by the SouthShore Chamber of Commerce, Hillsborough County Sheriff’s Office, Tampa Police Department, Northside Mental Health and Brandon Elks Club, which came to the community at the chamber’s request. Its Homeless Initiative Committee attended a recent outreach in Palm River and requested a similar event be held in South Shore. It was to be the first of its kind.

Melanie Davis, the chamber’s executive director, and two other chamber representatives went into the community for weeks, meeting with homeless folks in the area and passing out fliers inviting them to attend. They were also given information on free transportation. 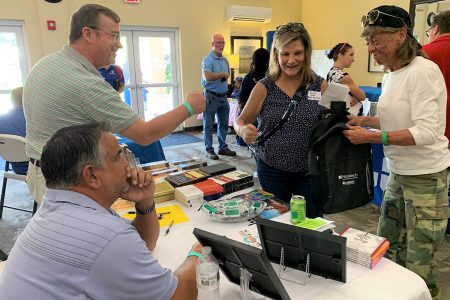 LOIS KINDLE PHOTO
Kimberly Rudisill, right, is delighted to have received a Bible from representatives of Bikes for Christ during the July 16 Homeless Outreach in Apollo Beach. Her guide, Laura West, of Bell Shoals Church, seems equally as pleased.

“We established five pickup points where the Sunshine Line bus would pick them up and bring them to the event,” she said. “We had no idea how many would actually show up, but we were hopeful we’d get a good turnout.”

They did. Sixty-five homeless folks came to see what the outreach offered in the way of resources for making their lives more livable. They had no obligation to accept anything, but many did, Davis said.

“Regardless of the reason why they’re on the street, it’s heartbreaking to see how they live,” she continued. “You never know where you’re going to be in life. Our goal for this event was not to end homelessness. That’s not going to happen. What we did was to show these people kindness and to offer help in some way. 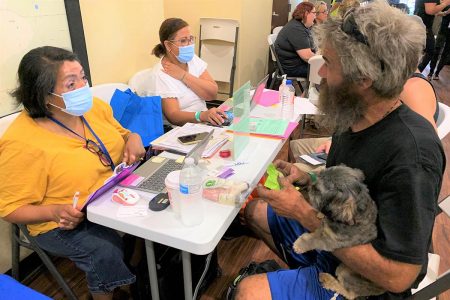 LOIS KINDLE PHOTO
Veronica Ortiz, of the Hispanic Services Council, talks with an unidentified homeless man about potentially signing up for food stamps and Medicaid at the July 16 Homeless Outreach, held at Bell Shoals Church in Apollo Beach. Like several other homeless folks, the man brought along his little dog to the event.

“After all, this is our community, and we share it with them,” Davis said.

Fringe Benefits Salon owner Amanda Marrero and three of her stylists took time off from work to volunteer and provide free haircuts at the outreach.

“It’s just wonderful to see so many companies, organizations and community members come together to meet the needs of these people,” Marrero said.

All of the homeless were offered a free meal and shower, as well. They could also receive clothing, shoes, personal hygiene items, Bibles and more by visiting a required number of tables first, which were stamped to show they had participated. COVID-19 vaccinations, flu shots, wound care and various health screenings were also available. 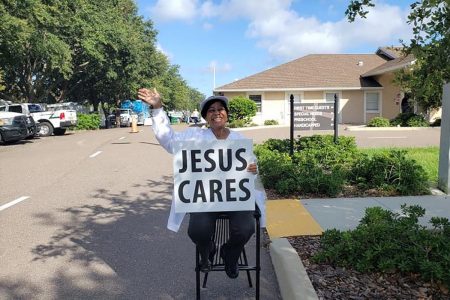 SOUTHSHORE CHAMBER PHOTO
Diane Williams, aka The Jesus Cares Lady, welcomes homeless folks delivered to Bell Shoals Church in Apollo Beach as they arrive via the Sunshine Lines bus that picked them up throughout the morning from five established sites in Gibsonton through Ruskin.

Master Deputy Stephanie Krager, of the Hillsborough County Sheriff’s Office’s year-old Behavioral Resources Unit, started the agency’s Homeless Initiative in 2013. Initially, it had two deputies, and today there is one for each district. She is its team leader. 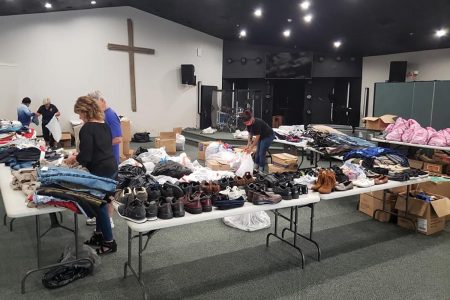 SOUTHSHORE CHAMBER PHOTO
Volunteers prepare an entire room of clothing and shoes donated by SouthShore Chamber of Commerce members and others for area homeless folks at the July 16 Homeless Outreach.

“Working with these people on a daily basis, we realized they weren’t getting access to resources to get them off the street, if that’s what they choose,” Krager said. “We focus on people deep in the woods who are usually mentally ill, have substance abuse problems or developmental issues.

“We give them a hand up, not a handout,” she added. “We want them to get what they need to succeed.”

Church officials were delighted by how the event went, said Dee Fridella, its community outreach coordinator. 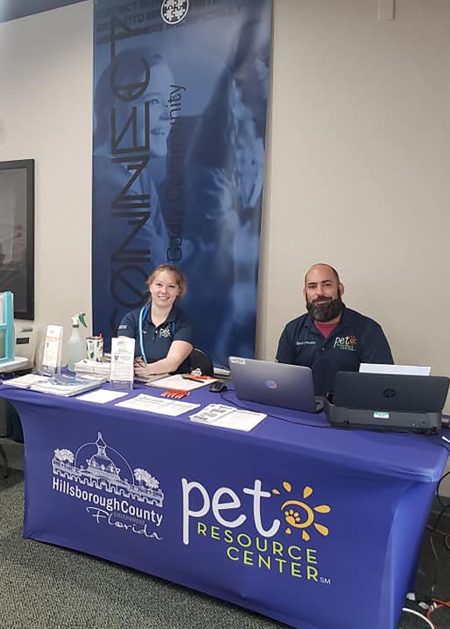 SOUTHSHORE CHAMBER PHOTO
Representatives from the Hillsborough County Pet Resource Center and Community Pet Project came to provide resources and care for dogs brought in by homeless folks who came to the Homeless Outreach July 16.

“(The event) was such a phenomenal success,” she said. “Everyone enjoyed it, including the homeless, many of whom asked if we could do it again.

“We felt very blessed to be asked to host this.” 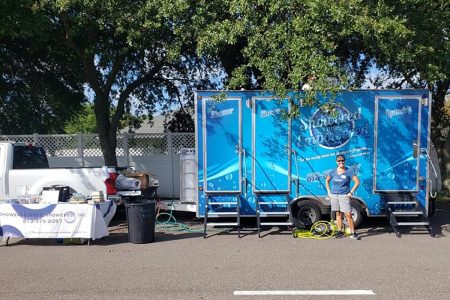 SOUTHSHORE CHAMBER PHOTO
Christina Jenkins, of Showered and Empowered, provided the opportunity for a free shower for the homeless attendees who actually went around to check out at least a few of the multitude of resources offered at the Homeless Outreach. 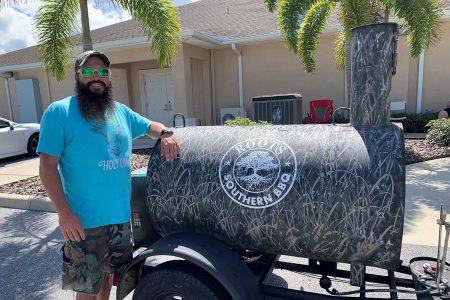 LOIS KINDLE PHOTO
Pitmaster Josh Ricard, owner of Roots Southern BBQ, prepared pulled pork and sides for the 65 homeless people who attended the outreach and more than 100 volunteers from the various agencies represented at the event. 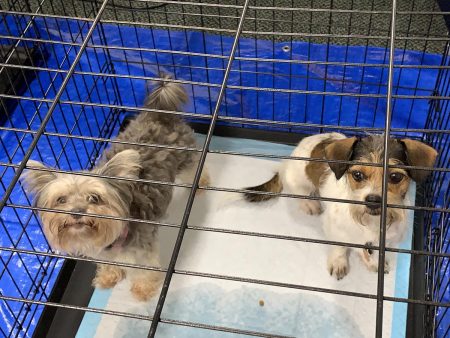 LOIS KINDLE PHOTO
For some homeless people, pets are constant companions, whom they often take better care of than themselves. During the Homeless Outreach, attendees could kennel their dogs onsite while they visited the multitude of vendors offering services. These two and another dog in a different kennel live in their owner’s car with her family members.