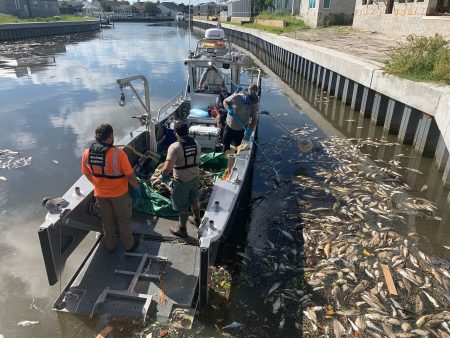 The Hillsborough County response team pulls dead carcasses of fish and other marine life from the South County Canal in the MiraMar neighborhood in Apollo Beach. The Red Tide has hit coastal and bay areas of the County this month.

The unpredictable Red Tide has ravished marine life and created a massive and expensive clean-up job.

Although the current battle with the dead fish and the foul odor is not over yet, observers are saying this year’s Red Tide is far worse than the 2018 bout with nature’s negative phenomenon. The source of toxic algae outbreaks in Florida and the Gulf of Mexico produces toxins that kill fish, birds, sea turtles, manatees and dolphins and can cause shellfish poisoning in humans.

Hillsborough County has had far fewer dead fish than Pinellas County, but the dead marine life are still a significant issue in coastal Hillsborough County, particularly in the South Shore area of Apollo Beach and Ruskin. The coastal and bay area between the mouth of the Alafia River in the north near Gibsonton and Ballast Point, south of Tampa, have been hit extremely hard with the Red Tide, due to the winds of the recent storm Elsa.

The scientific term or the Latin name for the Red Tide is Karenia brevis. The sea scourge is as old as the peninsula now known as Florida and emerges from the Gulf of Mexico if not annually, then every two or three years. The Red Tide is a plant, an algae whose bacteria kills fish and other marine life.

The Hillsborough County’s Rapid Response team and Marine Unit have picked up about 4,500 pounds of dead fish so far. The carcass pick-up count in Pinellas County, including St. Pete, is at 1.4 million pounds. Both stats are still growing.

The County closed the beaches at E.G. Simmons Conservation Park in Ruskin and Apollo Beach Nature Preserve on July 9 because of Red Tide. Both are closed until further notice, says a Hillsborough spokesman.

Hillsborough County has deployed workers with the Rapid Response team and Marine Unit to collect dead fish in areas where they are accumulating. Those efforts are ongoing.

One area fisherman scolded local and state government and agencies for ignoring the dangers of the Red Tide. David Gill verbally exploded to the news media, “I wanted to scream and rip my hair out because I watched my livelihood die right in front of me,” Gill, who has been fishing these waters since he was a boy, strongly commented.

For years, Gill and other fishermen have traveled miles to get away from Red Tide, which he believes is exacerbated by pollution, including the accidental release of phosphates from Piney Point. Gill is upset. “The EPA and DEP knew for years this was going to happen,” growled Gill. “They knew this for years, and they didn’t do anything about it.”

The Florida Fish and Wildlife Conservation Commission’s latest report shows the problem isn’t getting any better, especially in Tampa Bay. Unfortunately, the Red Tide is likely to stick around the Tampa Bay area. The Ocean Circulation Group at the University of South Florida is also collecting samples throughout the Tampa Bay area and forecasting trajectories of the Red Tide. Data from the samples for July 12-16 show high levels of algae traveling further into Tampa Bay, concentrating along some of the shorelines

Red Tide is the harmful algae bloom that produces toxic chemicals that can cause respiratory illnesses in people and even serious and sometimes deadly effects on marine life. Florida’s former chief science officer said a leak in a reservoir in April at a former phosphate plant in north Manatee County isn’t the cause of a Red Tide outbreak along beaches and bays of Pinellas and Hillsborough counties. However, professor Tom Frazer, now at the University of South Florida College of Marine Science, commented that nutrients from the abandoned Piney Point phosphate-plant site could be helping fuel the outbreak.

Frazer added that other sources could include pollution and runoff from area septic tanks, the region’s 18 stormwater systems and agricultural and residential fertilizer. Frazer does not think that the Red Tide was originated as a consequence of Piney Point.

“One of the things that we saw with the Red Tide early on was that it was south of the discharge area, with the Red Tide continuing to kind of migrate or move northward into lower Tampa Bay,” Frazer said. He added that there are a large number of nutrient sources for Red Tide along the coast.

Currently, Hillsborough County is exploring the feasibility of having a contracted vendor remove dead fish from waterways and along the coastline before the fish wash ashore. This cumbersome but necessary task is extremely difficult due to tides, weather and water conditions, as well as fish in rocks and mangroves located on private property.

If there are dead fish on private property that residents wish to dispose of immediately, it is advised to double-bag the dead fish using gloves and wearing a mask and dispose in the gray garbage cart that will continue to be collected twice a week. Collected dead fish that have been double-bagged can also be taken to the South County Community Collection Center at 13000 U.S. 41 in Gibsonton from 7:30 a.m. to 5 p.m. Monday through Saturday for proper disposal. Residents must show a valid photo ID. Disposed dead fish will not count against annual residential disposal limits. Commercial businesses are not permitted to dispose of dead fish at this site. Additional sites where residents can dispose of dead fish are anticipated to be added soon.

The County is also collaborating with the Florida Department of Environmental Protection to identify grant funding for affected counties and the City of Tampa to assist with cleanup efforts. Elected officials are addressing the needs with Tallahassee.

County officials offered to residents a number of recommended precautions from the Florida Department of Health regarding Red Tide:

•When possible, stay away from water bodies and beaches where red tide or fish killed by the toxic algae is present.

•Wear shoes to prevent injuries from stepping on fish carcasses.

•Don’t harvest or eat shellfish from an affected areas.

•If breathing difficulties do not subside after leaving a Red Tide area or going indoors, contact your health care provider.

A number of fishing-charter captains in the Little Harbor marina of Ruskin continue to take clients out for fishing. They claim they can take customers where they “can catch some fish.” For now they disregard the dead marine-life carcasses being cleaned up in the marina. The Red Tide kills are mainly bait fish, maintain the charter captains. The professional fishermen still bemoan the 2018 Red Tide. The government agencies shut us down three years ago, says one captain. If they shut us down again, it could put us out of business, he claims.

For more information on the status of Red Tide in Hillsborough county and how to report fish kills, visit www.HCFLGov.net/RedTide. For general County information, call 813-272-5900.