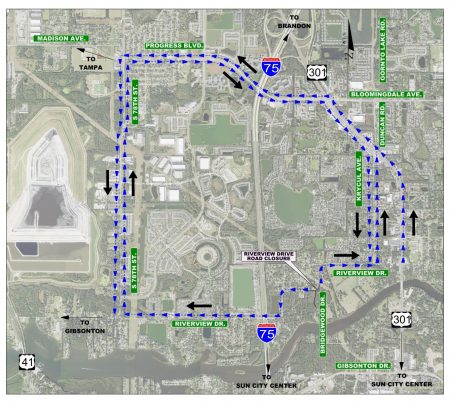 Notice has been issued for a 90-day road closure, starting in September and related to construction for the upcoming Riverview/Alafia River conservation park off Riverview Drive between Interstate 75 and U.S. 301.

County officials seek public comment concerning the temporary road closure, which is for the slice of Riverview Drive between Dean Street and Albyar Avenue as work advances on the 27-acre site for the riverfront park.

More specifically, the work involves construction of a traffic roundabout for increased safety near the park’s entrance. County officials have said modern roundabouts effectively reduce speeds below 25 miles per hour, which helps to “eliminate most lethal crashes, such as T-bone and head-on crashes that can occur at conventional intersections.” Slower speeds, they contend, “also benefit all other users of the roundabout, including pedestrians, bicyclists, skateboarders, children and the elderly.”

Public notice of the upcoming road closure is detailed online at the Hillsborough County Engagement Hub, which as of Monday morning, July 12, had drawn four write-in comments as well.

The public engagement period is set to last through July 19. After that, concerned people can sign up to speak on the issue at the Hillsborough County Board of County Commissioners board meeting Aug. 4. To sign up, visit www.HCFLGov.net/SpeakUp. Written public comments can be forwarded as well to boccrec@hillsclerk.com/.

“Residents living on or adjacent to Riverview Drive between the I-75 overpass and 78th Street apparently can only leave heading west and never return,” reads one comment on the engagement hub. “I feel for the residents at Dean and Albyar; these roads will be used as an additional access.”

Another respondent asked, “What will be done to prevent shortcuts [through] our neighborhood at Dean and Albyar? And you know the public will try. Most everybody has GPS.”

According to the proposed road closure, eastbound traffic for Riverview Drive would be detoured to Krycul Avenue to U.S. 301 to Progress Boulevard to South 78th St. to Riverview Drive.

“This closure will negatively impact travel on the detour roads, especially around rush hour,” wrote one commentator on the engagement hub, who raised concerns also about school bus delays. “Traffic is already a significant concern in this area and will make traveling around Riverview more of a headache and frustrating for those that [live] on or around Riverview Drive.”

As for a more general concern, the fourth respondent asked, “Why is Riverview Road open to vehicles with more than two axles?” Noted was “the need for paving and pothole repairs from the west side of Riverview Drive from Highway 41 to 78th Street.”

As for the upcoming park itself, it’s been described as a “passive park,” which means most of the land’s features will be left undisturbed, with a vegetative buffer of trees along the western edge of the property. Open areas will feature plants native to the area.

Scheduled amenities for park-goers include wooded picnic areas with shelters and restrooms, paved parking, a walking trail and an observation tower to provide bird’s-eye views of the Alafia River. A similar 37-foot, wooden observation tower, offering stunning sunset views of both the Tampa and St. Petersburg skylines, opened in September at the Apollo Beach Nature Preserve. Like the Apollo Beach preserve, at 6760 Surfside Blvd., the Riverview/Alafia Park is set to open sunrise to sunset.

Approved is Daniel HorseChief’s proposal for a 6-foot high bronze sculpture of a Seminole mother and child. Featuring a panther as well, it’s set to be mounted on a 6-foot high rock base inside the Riverview/Alafia River Park. Construction is slated for early 2022.

Meanwhile, a call for artists in August 2019 had been issued as well for a sculpture of Riverview founder Benjamin Moody, to be placed at the park’s entrance.