Celebrating Freedom in a big way 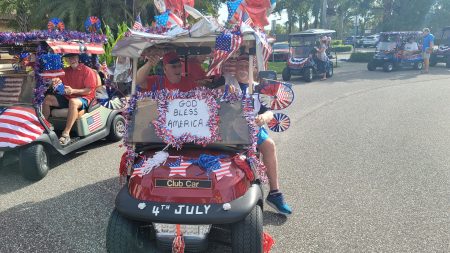 In Valencia Lakes, Mike Albritton (R) and neighbor Wayne King (L) were delighted to win First Place in that community’s Eighth Annual Independence Day parade. The Albrittons and Kings share ownership in the cart and split the $25 VISA card prize. With a chuckle, Albritton said they also have shared custody of the “traveling” golf cart-adorned throw pillow that goes to the winner each year. Bob Race won second, and Carol Pontious won third.

Celebrating Freedom in a big way

In Greater Sun City Center, residents donned their red, white and blue and joined the throngs of U.S. communities to mark the nation’s 245th birthday. Participating/watching parades, fireworks and get-togethers with friends and family are all traditions created by families and communities to remember the courage of the 13 colonies that declared independence from Great Britain so long ago. Following is a sampling of happenings in this area. 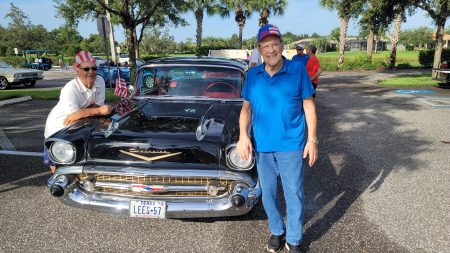 Rodney Davis (L) is the force behind the Valencia Lakes parade organizing team that includes Toni Peitte and Lifestyle Director Karyn Taylor. Davis says that every year they include “something special.” This year it was cars from the community’s classic car group. Lee Zak (R) is the owner of this ’57 Chevy that he has owned since 1958. Four cars from the group joined the 25 participating golf carts to cruise the neighborhoods throughout the 1,631-home community. 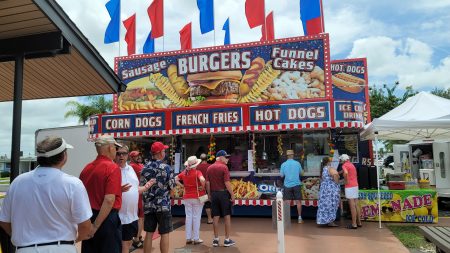 C&J’s Food Fair added to the CA festivities with its delectable offerings served from 9 a.m. to 7:30 p.m. Charlotte Clark (The “C” in C&J) said they were delighted to debut their new, larger food stand operation in Sun City Center on Independence Day. 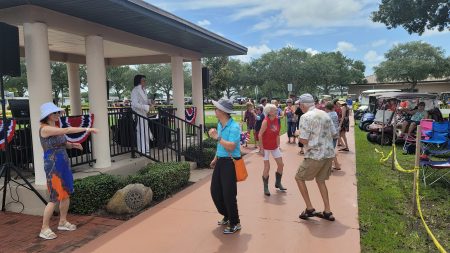 A July 4 Family Fun Day, sponsored by the SCC Community Association, featured music by the ever-popular Bill Lindsay (aka Elvis Presley). Kevin Brooks, David Morris and 3-Dom Band also were on the day’s entertainment roster. Entertainment Director Renee Bray said she was elated with the attendance on what turned out to be a wonderful sunny day filled with smiles. Some clubrooms were open for browsing/shopping, and the Model Rail Railroad Club set up a special display. Many took advantage of the pool to cool down. 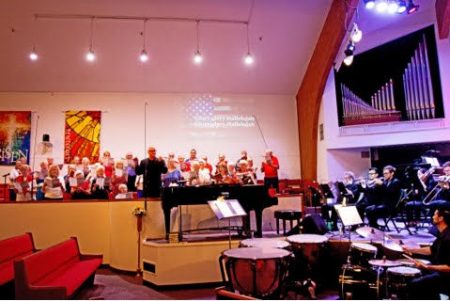 On July 3 and 4, the Chancel Choir & Friends of the United Methodist Church of Sun City Center presented the choral cantata Of Faith and Freedom by Joseph Martin. Directed by Jeff Joran, the 40-voice choir was accompanied by a brass and percussion ensemble as well as the church’s fine organist, Keith Rasmussen. The ensemble also performed Wilhousky’s exciting and challenging arrangement of Battle Hymn of the Republic. In addition, the 700 plus folks who attended the three services were treated to the beautiful sounds of the SCCUMC’s Bell Choir. 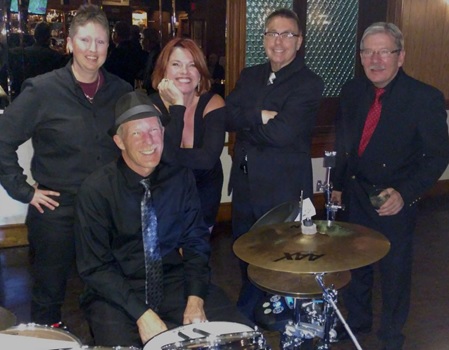 At Kings Point, the Sunset Social Club Band rocked the South Club with its special brand of entertainment to help residents celebrate Independence Day. The pools were also buzzing with activity. 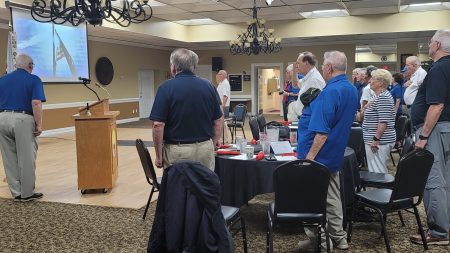 In a continuation of the nation’s celebrations on July 4, the Sun City Center Chapter of the Military Officers Association of America (MOAA) held a special meeting July 7 that included an Independence Day video program. The patriotic music and presentations made everyone in the room stand just a little taller and feel proud to be a citizen of this great country.