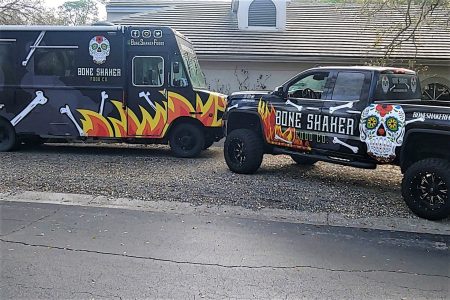 The food truck and Earl Bush’s personal pick-up truck are rolling advertisements for Bone Shaker Food Co. based in Ruskin. The food truck is parked at Cypress Creek Golf Club, 1011 Cypress Village Blvd., Thursday through Sunday from 10:30 a.m. to 3 p.m.

Earl Bush loves to cook. He started as a child in his Italian grandmother’s kitchen, stirring her homemade sauces. He was inspired, he said, to pursue the art by her brother in-law, who’d come to visit, kicked everyone out of the kitchen and then prepared a fabulous meal, while smoking cigarettes and drinking wine. 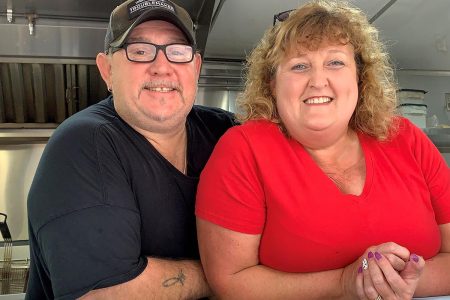 Bush, 46, equally enjoys helping others, especially those who live in the community of Ruskin, where he and his wife, Annette Buzbee Bush, were born and raised.

“I’ve never met anyone more willing to help people,” Annette said. “God blessed us both with giving hearts and a gift for gab, and we try to use those gifts daily.”

The Bushes own the Bone Shaker Food Company food truck in partnership with the owners of Cypress Creek Golf Club in Ruskin, where the couple serve golfers and the public their menu of “twisted Tex-Mex with a southern flair.” It includes pulled pork; Texas-style brisket; authentic, Mexican street-style chicken; fried cod tacos, all with their own special sauces and fillings; assorted sandwiches, including Cubans; BBQ; and sides. There’s even a menu for kids 12 and younger. The couple will launch a full catering menu during the next few weeks. 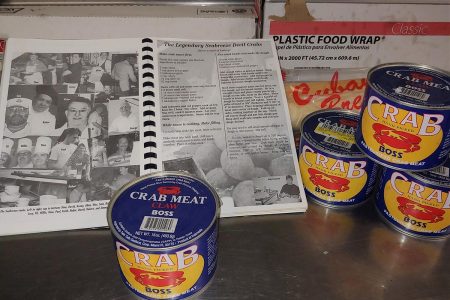 The Bone Shaker Food Truck uses the former Seabreeze Restaurant in Tampa’s recipe from the early ‘90s to prepare its highly popular deviled crabs. The Bushes say they sell “a ton” of them.”

Everything is fresh and made to order.

“We have a great selection of home-cooked meals,” Earl said.

The truck is parked at the golf club, 1011 Cypress Village Blvd., Thursday through Sunday from 10:30 a.m. to 3 p.m. After that and on other days, the mobile eatery heads to a variety of venues, both public and private, including sites like Four Stacks Brewing Co. in Apollo Beach, The Art Walk in St. Petersburg and South Shore Bay in Wimauma and events like wedding receptions, catered parties, grand openings and more. For example, Bone Shaker Food Co. was hired recently to cater the Lennard High School baseball team’s banquet at South House in Ruskin and the East Bay High cheerleaders awards banquet at Summerfield Golf Club. 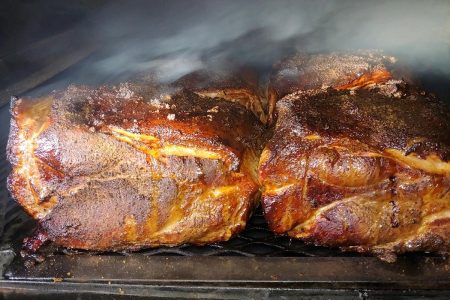 The couple formerly owned and operated Sayin’ Grace BBQ food truck from 2018 to 2020 but closed it due to the pandemic. They want to eventually turn it into a lemonade stand for the grandkids.

During the pandemic, they set up their business at Ruskin Bait & Tackle to sell breakfast Cuban sandwiches and special burgers. As a community service, they purchased large amounts of chicken, pork, black beans and rice to make and serve free, hot meals for anyone in need. 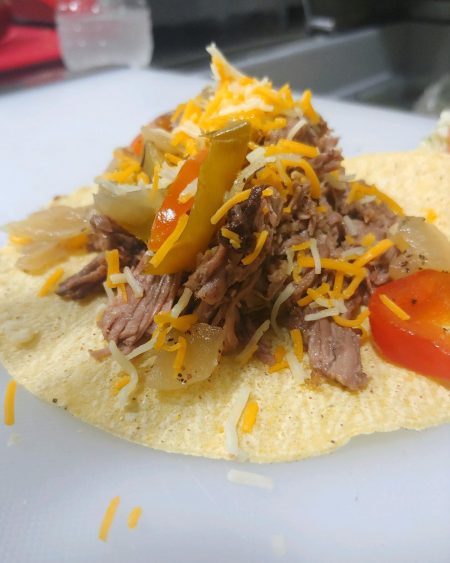 He was approached by the owners of Cypress Creek Golf Club, who had known him for years, about setting up a food truck on club property to feed golfers. The partnership was formed, and the Bone Shaker Food Company food truck has been there since December 2020.

On April 24, the Bushes worked a fundraiser for My Warrior’s Place at Wellspring Church in Ruskin.

“It was a great success,” Earl said. “We are going to try and do two more events before the end of the year, and then make one large donation. We’ve adopted My Warrior’s Place as our charity of choice.”

Earl has a special place in his heart for veterans. Annette’s son, Danny Amerson, is a retired Army sergeant who overcame PTSD, and his father-in-law, Bob “Pa” Buzbee, was a Korean War POW from 1950 to 1953.

Earl’s also proud of his granddad, Horace Tedder. He was also a veteran who served in the army during World War II. He came home with his Italian bride, Immacolata Lantano, and opened the old Phillip’s 66 gas station in Ruskin. 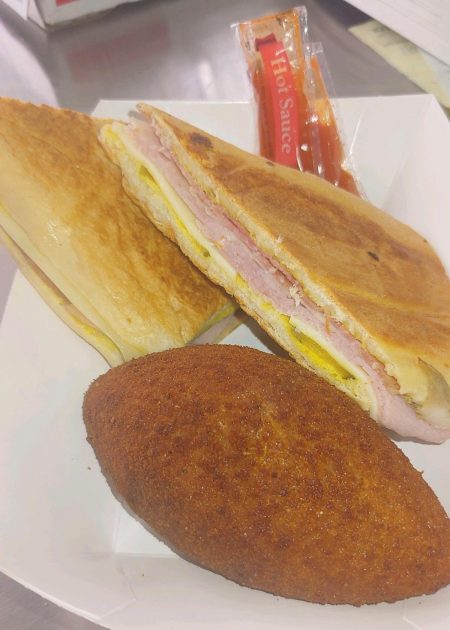 The man knows how to cook: Earl’s 30-year history in the food industry includes “bustin’ suds” (washing dishes) and working the line at the old Manning’s Restaurant in Ruskin; cutting his teeth at the former Golf & Racquet Club in Sun City Center, where he worked for nine years; cooking at the Seabreeze Restaurant, Cheval Country Club and Bahia Beach before Little Harbor and more. In 1995, he set up a large smoker to sell barbecue roadside and has catered his BBQ at events ever since.

Annette, who’s among six generations of the Buzbee family, only recently began working with her husband. She had been a pharmacy technician for 30 years, starting her career at the now-defunct Rexall Drugs in Ruskin. Her last 15 years were spent in the pharmacy at the Walmart.

Now she helps Earl prep, takes orders and chats it up with customers. 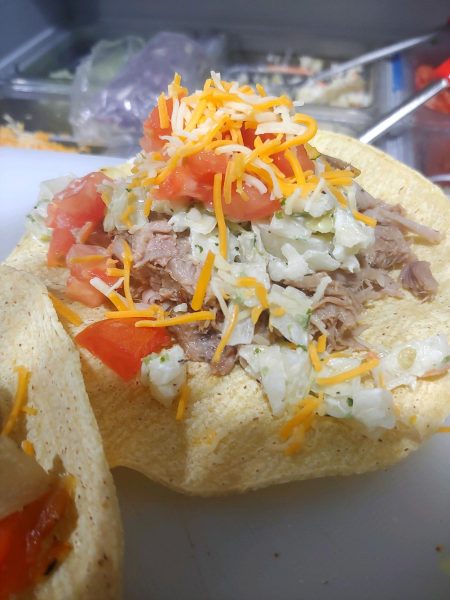 “Earl is a great cook,” she said. “It’s my job to make the customer’s experience good. We feel the food can be great, but if the service isn’t, customers won’t come back. We’re both about people, and that’s why it works.

“Customers are automatically family,” she said.

The couple have two adult sons and a daughter, live in Ruskin and are raising their three grandkids, ages 4, 6 and 8.