The Harlem Globetrotters show off basketball skills at Yuengling Center 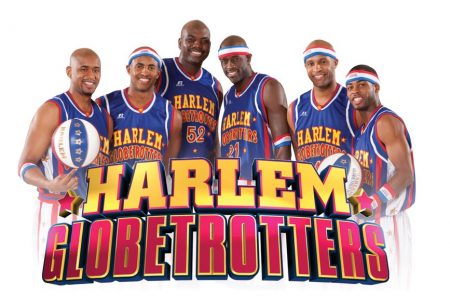 The Harlem Globetrotters show off basketball skills at Yuengling Center

America’s longtime love affair with iconic Globetrotter basketball started with the Savoy Big 5 in Chicago in 1926. A bunch of talented Black ball players in the Chicago area displayed their incredible basketball skills to fans who came to watch them play ball and entertain, in a dynamic style, which the Harlem Globetrotters continue to this day. In July 2021 that same brash, upbeat, in-your-face fashion of basketball is set for Tampa Bay area basketball fans as well as spectators who do not know a double-dribble from a travel infraction.

The Savoy Big 5 was called the Chicago Globetrotters for a year or two. Then, a marketing genius and shrewd businessman, Abe Saperstein, hooked up with the team, which adopted the name The Harlem Globetrotters to emphasize its connection with Black culture through the name “Harlem,” the small borough in New York City, which was rapidly becoming the capital of Black culture in the US in the roaring twenties. The Harlem Globetrotters actually did not play a basketball game in New York City until 1968! Saperstein, also a key substitute player, was White but he knew how to handle the players and negotiate all the deals that sent the Harlem Globetrotters touring all over the US and the world. Saperstein also knew how to mentor the gifted players to synchronize their fabulous ball skills with their showmen’s personalities and put on a show in addition to becoming an excellent basketball team. The Harlem succeeded Globetrotters succeeding in making money throughout the US as well as all over the world, including Communist Russia in 1959.

The world-famous Harlem Globetrotters are bringing their newly re-imagined Spread Game Tour to Tampa’s Yuengling Center on Sunday, July 25, at 2 p.m. The Spread Game Tour is a basketball event like no other. Ankle-breaking moves, jaw-dropping swag and rim-rattling dunks are only some of the thrills you can expect from this fully modernized show. Part streetball from the players who defined it, part interactive family entertainment, the new tour will show off the best of the Globetrotters in a dazzling exhibition of talent and game.

The Spread Game Tour introduces new premium fan experiences with unprecedented access and interaction, including celebrity court passes, meet and greets with players and, in select markets, the #SQUADZONE, where fans have the opportunity to feel like part of the show.

For over 95 years,The Harlem Globetrotters organization has been committed to spreading joy through its artful athleticism and unparalleled basketball skills. The Globetrotters have always been global ambassadors of goodwill. The re-imagined team is even more committed to bringing its voice to social justice conversations while inviting communities all over the U.S. to come together and recognize the power of our commonalities and celebrate our differences. The Globetrotters’ mission, to spread game and bring family entertainment to the world, continues to drive them today.

The originators of a unique basketball style, influencers on today’s game and skilled athletes of the highest order, the world-famous Harlem Globetrotters have showcased their iconic talents in 124 countries and territories on six continents since their founding in 1926 as the Savoy Big 5 in a Chicago dance hall. Proud inductees into the Naismith Memorial Basketball Hall of Fame, their mission to spread game and bring entertainment to the world continues to drive them today. The Globetrotters, innovators of the game, popularized the jump shot and slam dunk, and they invented the half-court hook shot. For nearly a century, the Globetrotters have exhibited Black excellence on and off the court, entertaining, inspiring and advancing the racial progress of today.

Tickets for this event at the Yuengling Center in Tampa Bay are on sale at Ticketmaster.com/. Ticket prices are $20, $30, $40, $50, $70, $80 and $115. Prices do not include facility fee or service charges. Advanced parking passes are available at ParkWhiz.com.