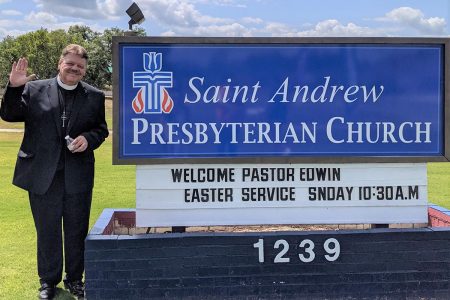 COURTESY PHOTO
The Rev. Edwin Gonzalez-Gertz is mixing things up at St. Andrew Presbyterian Church in Sun City Center and making the experience of going to church meaningful, memorable and fun. He became pastor April 1.

The Rev. Edwin Gonzalez-Gertz is breathing new life into the congregation at St. Andrew Presbyterian Church in Sun City Center.

“In most congregations where I’ve worked, the question has always been, ‘Do you offer contemporary or traditional service?’” he said. “My response is, ‘Worship is worship. It has nothing to do with either. Both are consumeristic ideas rather than spiritual, so the question should be, ‘Why can’t we have it all?”

The new pastor believes in mixing up all forms of worship by using every “toy” God provides in His sandbox. This includes different forms of worship, ancient traditions and whatever the congregation “makes up.

“In worship services, instead of a talking head, we teach through music, arts and crafts and visuals,” Gonzalez-Gertz said. “Our new slogan is creativity in worship and innovation in ministry.”

For example, since no beer can be served on church grounds, he plans to arrange an Octoberfest social for the congregation at the Old Castle Restaurant in Ruskin.

The 61-year-old pastor said it’s essential to keep the church alive by including all channels of learning to reach members, old and new alike.

“Some people’s learning is kinesthetic (by moving, touching and doing); some visual (through pictures and images); and others, auditory (through sounds and words),” he said.

By mixing things up, he is able to reach everyone and make their experiences meaningful, memorable and fun.

“Our congregation is having a ball,” he said.

Longtime member Carol Liedberg, who’s been with the church for 14 years and experienced four pastors, agrees.

“We were looking for a new direction, and he’s given us one,” she said of Gonzalez-Gertz. “We’ve experienced a real boost since he came, and some people who left us have now come back. Going to church is more joyful now. “There’s more innovation and creativity, and it’s genuinely fun. It’s what church should be. You leave with a smile on your face.

Gonzalez-Gertz is originally from Puerto Rico and is of Spanish and Dutch heritage. As a young man, he came to the United States to live with an aunt in Ohio, where he attended Ohio University for two years. He then transferred to the University of South Florida in Tampa and finished his bachelor’s degree in behavioral science in 1979.

He eventually became a pastoral psychologist and taught at Jones College campuses in Miami and Jacksonville and also instructed students at Miami-Dade Community College.

‘When I was 40, instead of getting a blonde and a convertible (like many men do in midlife), I went back to school at the Florida Center for Theological Studies in Miami and earned my Master of Divinity degree,” he said.

After that, he became ordained, served for a period of time at a local congregation and then was called to be executive Presbyter (bishop) of Tropical Florida Presbytery in Miami.

When his three-year term expired, he founded the Light of Hope Presbyterian Church in Marietta, Ga., which included three congregations in decline and about to close. He gave this combined congregation a multicultural emphasis and gave it new life for eight years.

“I was contacted last November by a search committee for St. Andrew Presbyterian Church, and due to the pandemic, (rather than an in-person interview) its members watched several services online and fell in love with the Light of Hope Congregation,” Gonzalez-Gertz said.

He started as pastor here in Sun City Center April 1.

The minister, who has three adult children and a grandchild, brings his 7-year-old dog, Daisy, to work each day and also to church, where she and other several other dogs are welcome. He plans to resume the popular pet blessings the church once held annually, as well as its health fair, Pizza and a Movie (as of July 15) and Taco Tuesdays with storytelling.

“We’re reviewing all our ministries,” he said. “We’ll keep the ones that worked and introduce new ones. I’m open to ideas from my posse.”

St. Andrew Presbyterian Church is at 1239 Del Webb Blvd. W, Sun City Center. Its target demographic is folks 55 and older and includes those who have a high level of spirituality but no longer “like” church.

“Everyone here is treated as a child of Christ,” the pastor said. “All are welcome.”