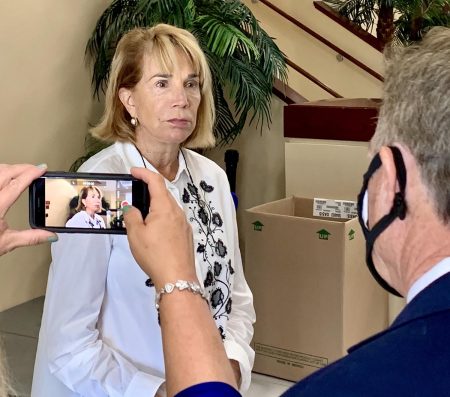 Hillsborough school board chair Lynn Gray, at a workshop meeting earlier this year.

The “top 10” list of state legislative concerns for 2022, under review by Hillsborough school board members, calls for equitable funding, charter school accountability and safeguards for local control of schools.

The list also includes calls to extend the eligibility for children with developmental delays from age 5 to 9, additional pathways for students enrolled in English Speakers of Other Languages (ESOL) programs and an update to the 1973 law that determines what paths to school are considered hazardous for walkers and bicycle riders.

School board members reviewed the legislative wish list at a June 29 board workshop meeting after individual discussions with school officials to discuss the suggested priorities and rank their top choices.

The top 10 list was whittled down from a review of 16 priorities and will be voted on at a board meeting this summer, after a final draft, along with talking points, is completed and submitted, according to Kristin Davis, director of government affairs.

Listed in order of importance, the No. 1 priority asks for a multiyear approach to bringing Florida’s per-pupil funding “to at least the median in the U.S. Department of Education’s ranking of the states,” which amounts to $11,732,” according to the legislative document under review. The aim is to provide school districts “adequate funding and flexibility to implement programs, mitigate unfunded mandates and adopt spending plans that best meet their communities needs.”

School board member Jessica Vaughn said it is necessary to point out that Hillsborough receives thousands less in per-pupil funding than is being proposed.

“I’m so proud and glad to see other school board members prioritized this,” Vaughn said. “It really is about making sure we fund our public schools.”

Florida ranks 46th in spending and 44th in funding, according to the report.

“We’ve fallen behind so many years when it comes to per-pupil spending,” said board member Karen Perez.

“Federal allocations are commensurate with our size; I think we’re number three on the list,” said school board member Melissa Snively. “However, state funding, it needs to be commensurate to the size and to the investment that we want to make for our children.”

Snively said she was especially pleased that squeezing by and into the No. 10 spot on the legislative priority list was a measure to readdress safe pathways to school, with a request for school district walking condition audits.

“This is something that we have been working on as a district probably for the last five or six years,” Snively said, noting the need to update “a very antiquated law from 1973 that determines what paths to school are considered hazardous.”

“If we can’t get children to school, we can’t educate them,” Snively said. “And with all the growth and all the construction that’s happening in our school district, there are cones and barricades all over this county.”

Board member Henry “Shake” Washington said he was “100 percent behind” the measure as well, noting that in the fall, “it’s dark in the morning, it’s dangerous and we need safe pathways.”

School board vice chair Stacy Hahn said she was pleased to see on the top 10 list the priority to increase funding for voluntary pre-kindergarten to “attract highly qualified teachers, improve programming and extend the school day.”

“Currently, 52 percent of the VPK students who come into our kindergarten classrooms are not kindergarten ready,” Hahn said. “That means they don’t have the most basic skills that our younger students need.”

According to Hahn, Hillsborough serves “only 12 percent of the VPK population in our community” and needs to be expanded. “We cannot wait,” she said.

Lynn Gray, chair of the board, agreed with all funding measures, including one that allows “virtual instruction programs to mirror the year-round funding model for Florida Virtual School” and one that calls for “fixing the inequity in capital improvement funding.”

As for local control, the board is in agreement with a wish-list proposal that aims to “ensure state education related initiatives are collaboratively developed with local school boards, providing local control of school district operations and policy decisions.”

“When we worry about federal government overreaching, now we have the state overreaching into our district,” said board member Nadia Combs. “We want to make sure that [as a local school board] we’re able to make the best decisions for our district.”

SouthShore Chamber to host event for area military members, veterans and their families