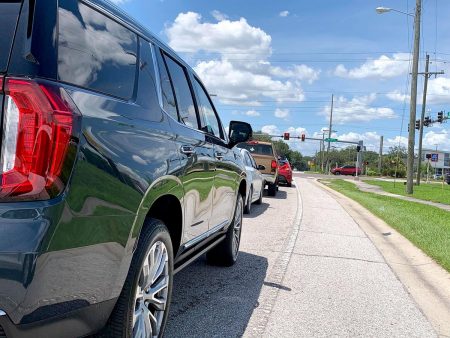 LINDA CHION KENNEY photo
Traffic flow on major roads is a top concern of Hillsborough County residents according to the 2021 Citizen Survey. Here traffic gets set to turn on to Big Bend Road in Riverview, one of the county’s most-heavily traveled roads.

Nearly one in two online survey respondents said they believe the quality of life in Hillsborough County will worsen over the next five years while roughly eight in 10 say they would recommend Hillsborough as a place to live, work, raise children and open a business.

Roughly two in three respondents said they would recommend Hillsborough both as a place to retire and to vacation.

According to county officials, feedback from the online survey “will help county administration to understand the community’s current priorities and satisfaction levels.” Feedback was solicited from both anonymous and online survey responses.

According to survey results viewed online June 28, Hillsborough is both for older residents and growing families. Overall, 8,975 respondents answered a question that offered eight options to describe their life stage. Forty-eight percent saying they either were retired (32 percent) or an empty nester with no children living at home (16 percent). Another 12 percent said they were married or cohabitating and had no children.

The survey provided 24 options for respondents to select in assessing both the importance of various community characteristics and then whether in their personal experience, those characteristics were true of Hillsborough County. In both instances, a scale of 1-10 was provided, with 10 representing “highest importance” and “extremely true.”

Sixty-six percent of the 12,286 respondents ranked both fire and emergency services and personal safety as being of the highest importance, followed by water and waste management (58 percent), traffic flow on major roads (57 percent), infrastructure – public roads, bridges, technology and architecture (57 percent), cleanliness of public spaces (54 percent) and storm and flooding resiliency (53 percent).

As for how well the county stacked up in providing these services, 33 percent of the 9,693 respondents gave a 10 ranking to fire and emergency services, which topped the list of 24 options. Water and waste management registered 18 percent) followed by personal safety (17 percent), infrastructure (13 percent), traffic flow (12 percent), cleanliness of public spaces (16 percent) and storm and flooding resiliency (14 percent).

When given three options to choose from, the 10,262 respondents said they were likely or very likely to use light rail (56 percent), modern and extended streetcars (41 percent) and modern and reliable bus service (27 percent).

In answering a question about their preferred method to receive updates or information about Hillsborough County, email by far topped the list of options with 75 percent of the 6,224 respondents. Next on the list was county website (23 percent), text message (19 percent), television (16 percent), newspaper (8 percent), radio (5 percent) and other (2 percent).

As for their engagement with Hillsborough County over the past year, social media channels received the least amount of “yes, sometimes” and “yes, often” selections among the 8,736 respondents. Respondents registered 16 percent for both Facebook and Next Door, followed by 5 percent for both Twitter and YouTube and 4 percent and 2 percent, respectively, for Instagram and LinkedIn. At the top of the list were county website (60 percent), email (46 percent), phone (35 percent) and in-person contact (16 percent).

The online survey is closed for responses and can be viewed at the Hillsborough County Engagement Hub at www.publicinput.com/hub/1175. The online survey reflects as well more than 20,000 comments.

South Hillsborough Chamber to host 2021 Bounce Back to Business Expo