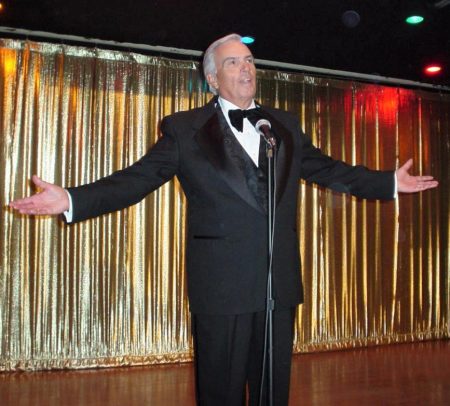 SCC PAC PHOTO
Sun City Center resident Lew Resseguie, a New York actor who co-founded the SCC Performing Arts Club in 2003, appears on stage performing a song at Rollins Theater many years ago. He was the group’s first and longest-serving president.

Eighteen years ago, three Sun City Center residents – a New York actor, a radio man and a psychiatric nurse – had a dream of entertaining, enriching and educating their neighbors through entertainment and brought it to fruition by forming the Sun City Center Performing Arts Club or PAC. 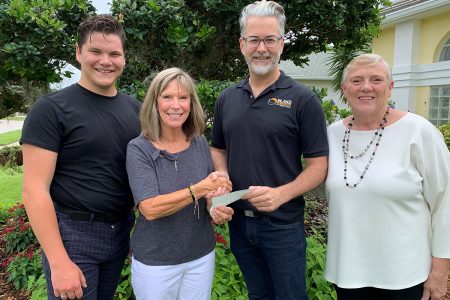 LOIS KINDLE PHOTO
The Sun City Center Performing Arts Club is ending its charter as a 501(c) 3 organization, and all of its remaining funds must be dispersed to other nonprofits. Shown here, PAC President Ellen Kleinschmidt, second from left, presents a check for one such recipient, Blake High School Thespians Booster Club, to Artistic Director Sean Ryan Paris. At left is former BHS student and PAC performer Alex Council, left, and Judy Brown, PAC board member and treasurer.

“Based on their sizes, backgrounds and demeanors, they were such an unlikely trio,” said Ellen Kleinschmidt, current PAC president. “But when Lew Resseguie, Ed Brown and Barbara Brtva met, something wonderful happened.”

Between 2003 and 2015, PAC performers presented 27 musicals that created many magical moments of live theater for area residents.

“It was our joy to entertain the audiences,” said Judy Brown, PAC treasurer and technical director. “No words can adequately describe our love and gratitude to the performers and people behind the scenes who worked so hard to ensure the highest level of quality for each performance. “(We are grateful) to our audiences and everyone who supported PAC and shared our love of the theater.” 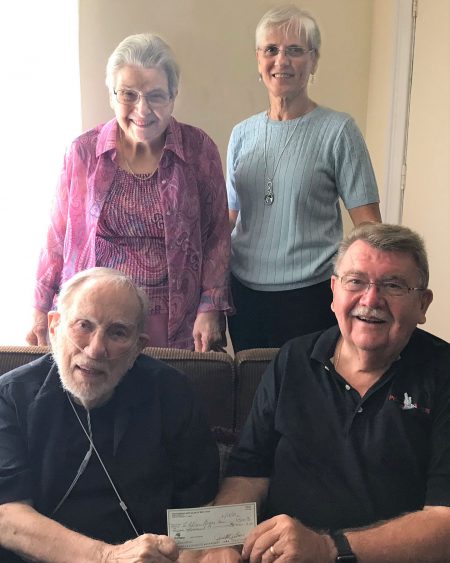 SCC PAC PHOTO
Ed Brown, of the Sun City Center Performing Arts Club, left, hands a $5,000 check to Rick Swenson, president of the Kings Point Pelican Players. The funds will be used for licensing, royalties, scores and script purchases or rentals for plays or musicals. Behind them are Barbara Brtva, left, and Diane LeFrancois, PAC board members.

According to Ed Brown, in 2006 when the Sun City Center Community Association indefinitely delayed plans to renovate Rollins Theater, PAC used money from donations, grants and ticket sales to make much-needed improvements, including a computerized sound system, new stage lighting, additional and more comfortable seating, a new main curtain and more. The theater was transformed into what he called “a first-class theatrical venue.” 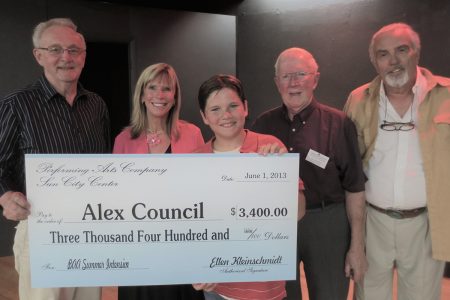 SCC PAC PHOTO
The SCC PAC was a strong supporter of area youth who wanted to perform in the arts. Shown here in 2013, Alex Council receives a $3,000 scholarship to attend a Broadway Artists Alliance summer intensive. Starting at age 9, Council developed his love for the theater by performing in musicals with PAC through his school years. Now 21 and living in London, theater is still his passion.
From left are John Breaugh, of the Community Foundation of Tampa Bay; SCC PAC’s Ellen Kleinschmidt; Bill Richards, also of the foundation; and SCC PAC President Lew Resseguie.

The club also invested funds in an interest-gathering reserve account with the Community Foundation of Tampa Bay.

Sadly, like most things in life, PAC’s days are coming to an end. The 501(c) 3’s final act will include dissolving its charter June 30 and disbursing its funds to other charitable entities.

Monies from its Community Foundation of Tampa Bay account will be distributed as follows: $20,000 to the Blake High School Thespians Booster Club; $10,000 to the Sun City Center Charitable Foundation’s Lew Resseguie Veterans Endowment Fund; $5,000 to the Pelican Players; and $500 to Donate Life America, in memory of longtime PAC sound man Jim Smith. 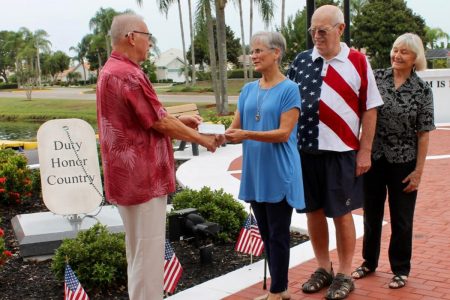 SCC PAC PHOTO
Walt Cawein, president of the Sun City Center Charitable Foundation, left, accepts a check from Diane LeFrancois, Lew Resseguie’s widow, for $10,000 from the Sun City Center Performing Arts Club to start a Veterans Endowment Fund in his name to be used only for veterans’ projects in the community. Looking on are PAC board members Don Churchill and Carlyn Laurent.

“The remaining balance in its reserve account will be used to establish the Lew Resseguie Sun City Center Performing Arts Club Endowment with the Community Foundation of Tampa Bay to benefit theater arts organizations throughout Hillsborough County (through annual distributions of interest),” said Wilma Norton, the foundation’s vice president of community connections.

The group recently decided to make a significant donation to the PAC endowment fund in honor of co-founders Brtva and Brown, who wrote and produced many PAC shows. 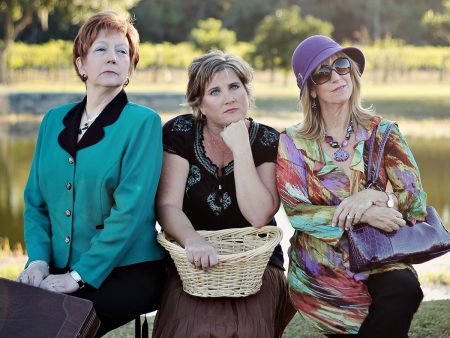 Kleinschmidt, who was with PAC during all but one of its run of shows, said the first ones were all musical revues narrated by Brown, accompanied by Chuck Wirick on piano. Then the club began using full orchestra tracks for musical plays. Eventually, performers Teri Council, Kathy Straub and Kleinschmidt were given the opportunity to write shows. They created three: “Aged to Perfection,” “Apartment 14G” and “Valentine’s on Route 66.” 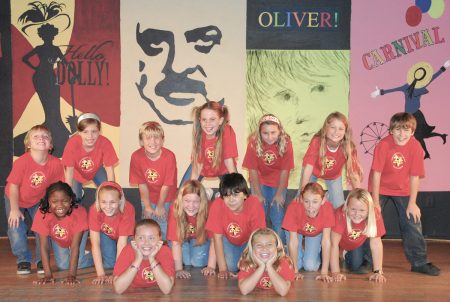 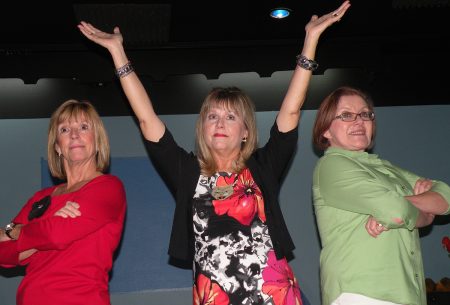 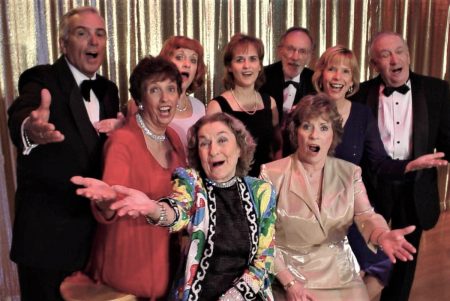 SCC PAC PHOTO
The cast of “The Great American Songbook” gather for a photo after their performances in 2004. The musical revue was the first show presented at Rollins Theater.

You can help ensure theater arts thrives in Hillsborough County by donating to the Lew Resseguie Sun City Center Performing Arts Club Endowment: visit https://cftampabay.org/give-now/, click on Endowments and Reserves and scroll to Give Now at the bottom of the page

Boom by the Bay is back this year