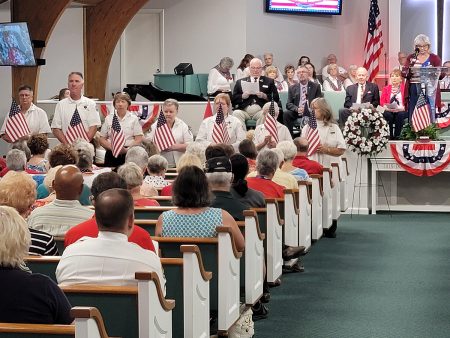 “There is a lot of red, white and blue in here,” remarked Craig Gross, guest speaker at the Sun City Center Memorial Day Tribute at Trinity Baptist Church…and there was. An air of patriotism filled the sanctuary for this traditional event after a pause last year due to COVID-19. In the past — for as many years as organizers can determine — this event was held at Kings Point, but lingering restrictions necessitated the change in venue.

Gold Star Father Craig Gross is the father of Army Corporal Frank Gross who was killed in Afghanistan in 2011. He is also the chaplain for the VFW AUX post in Oldsmar, Florida, and has volunteered at the USO and Fisher House and James A. Haley VA Hospital. He is currently the catering sales specialist for Mission BBQ, Tampa Bay. 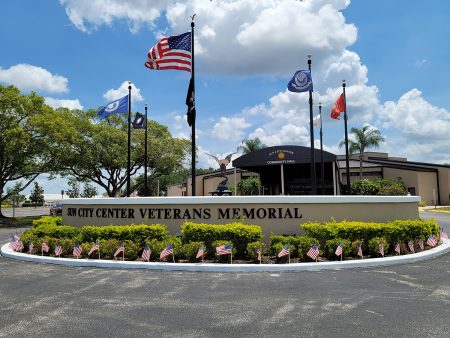 On Memorial Day, the SCC Veterans Memorial was visited often by loved ones honoring deceased family members and friends. The memorial was “dressed up” with an impressive display of 110 flags, courtesy of the SCC Charitable Foundation, and a wreath from the SCC Funeral Home.

Gross’ remarks about his family’s personal experience with Frank’s death reflected his dedication to keeping his son’s memory alive. He’s done that over the past eight years by performing a song he wrote, “I Buried My Son in Arlington,” all over the country. Gross was introduced by retired USMC Major Jim Haney, president of Military Officers Association of America (MOAA) SCC Chapter.

Retired US Army LTC Benny Blackshire served as moderator of the ceremony. In his remarks, he said, “Memorial Day is a day for remembering the many brave men and women who have given their lives through the history of our country to protect us from danger and harm. Today there are over 20 million veterans in America. 1.5 million veterans are living here in Florida and over half of those are age 55 or older. We are honored to have so many veterans and their families here in Sun City Center, veterans of World War II, Korea, Vietnam, the Gulf Wars and all the conflicts since. Today’s ceremony is a recognition of our community military veterans and a tribute to our departed comrades during the past two years.” LTC Blackshire is the West Central Area V.P. of MOAA Florida Council of Chapters. 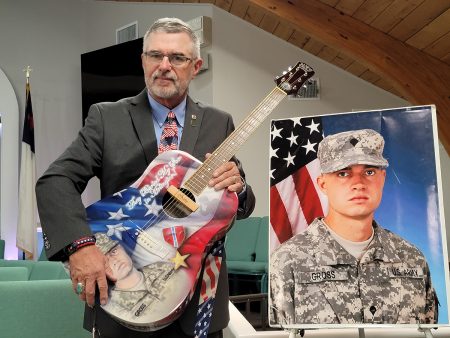 Gold Star Father Craig Gross included a musical tribute to his son Daniel in his presentation at the SCC Memorial Day Tribute. The song he wrote and performs all over the country—“They Buried My Son in Afghanistan”—can be found on You Tube or you can view the entire Tribute on www.TrinityBaptistSCC.com (archives).

The event was sponsored by MOAA — SCC Chapter. Floral arrangements for both this ceremony and the SCC Veterans Memorial, 1910 Pebble Beach Blvd. S., were contributed by SCC Funeral Home.