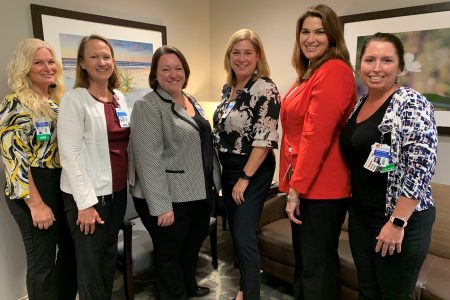 Sheldon Barr, CEO of South Bay Hospital, is steadily changing its corporate culture from the ground up. Since last November, when she was chosen by HCA Healthcare to lead the hospital, she and her senior management team – Sarah Tavenner, Michelle Harvey, Misty Steffen, Beth Atkins and Naomi Perkkio – have been actually “walking their talk” when it comes to making quality patient care, employee/medical provider/volunteer engagement and community involvement the core of everything they do.

“This team has passion and perseverance – organizational grit,” Barr said, qualities that will help the hospital meet both challenges and growth opportunities. “We have three primary goals: to be the (South Shore area’s) patient, family and provider hospital of choice; to be the caregiver hospital of choice; and to grow our surgical, cardiac and procedural volume to meet the needs of the growing community.”

Their commitment and enthusiasm are contagious.

Barr and Steffen, both registered nurses, can be seen personally interacting with caregivers daily.

“They want us to walk a mile in their shoes, and that’s important,” Barr said. “Our people are our biggest asset.”

“Sheldon has already met with almost every primary care doctor in our immediate area, as well as almost every surgeon and proceduralist who performs cases at our hospital,” said Michelle Harvey, South Bay Hospital chief financial officer, noting Barr is working to partner with providers in the entire area to become the hospital they refer patients to, and the one area residents want to go to for care.”

“She’s opening communication pathways that didn’t exist before with physicians and caregivers in our hospital,” she added. “What sets Sheldon apart as a CEO is the fact that she began her career as an ICU nurse. She puts patients at the center of every decision she makes. Not a day goes by that she’s not in the nursing units speaking to patients, families and our caregivers.”

Dr. Ahmad Issa, South Bay Hospital chief medical officer, said there’s an air of excitement among physicians about the direction this new management team is going. He’s practiced at the hospital since 2015 and been part of its administration since 2019.

“For the first time, all of the team is on the same page and have the same goals,” he said. “The message is consistent and clear. Ever since Sheldon’s been here, her mantra has been to make South Bay Hospital the provider of choice in the area and to grow it, provide all the services needed and integrate the hospital into the community.

“More than ever, our doctors feel all of these things are possible, based on the results we’ve immediately seen in nursing,” Issa said. “We have the right people in charge and can already see meaningful change happening.”

That meaningful change includes an intentional program called SWAT, established by Chief Nursing Officer Misty Steffen. It involves the entire staff, including nurses and patient care technicians, working together as a team to improve the patient care experience, including their safety, security and trust. Ratings on patient satisfaction surveys have soared since the program was implemented.

For example, nurse manager Sam Kaaa, whose team was the first to go through the program, went from being in the bottom one percentile across the country in nationwide Press Ganey surveys to above the 91st percentile in March.

“I used to spend the bulk of my time dealing with complaints the first few weeks I was here,” Barr said. “Now, the calls are about commending staff.”

There’s also a great deal of excitement about the hospital’s new robotics-surgery program, launched in April and May, and the continued growth of the cardiovascular/catherization program, initiated a week before Barr arrived. Both have had great outcomes and community support, Barr said.

“We look forward to adding more services as the community grows, based on its needs, she said.

“I was pleasantly surprised at the level of care I received recently when I went to the emergency room, after initially thinking I should go to St. Joseph’s South,” said Phyllis Gannon, of Apollo Beach. “The staff was very caring and professional, and I was in and out quickly. They listened and answered all my questions, and that put me at ease. They went out of their way to let me know who would be taking care of me. My perception of the hospital has definitely changed because of my experience.”

“Everyone really went above and beyond to make me feel comfortable and taken care of,” she said. “And I was surprised when Sheldon Barr popped in to check on me before I was released. She was dressed in scrubs and came to help the nursing staff. Who does that?

“South Bay Hospital may be smaller in size, but its level of care is excellent,” she continued. “I’d highly recommend it to anyone.”