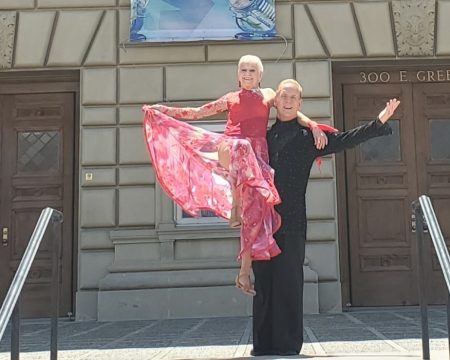 Courtesy photos
Roy Stone, 62, and his student dance partner Judith Baizan, 96, are shown here in front of the auditorium inPasadena, Calif., where they recently auditioned for America’s Got Talent.

A 62-year-old Sun City Center man and 96-year-old South Tampa woman have danced their way into the “deliberation” stage of the televised competition America’s Got Talent.

Roy Stone, owner of the Lavelle Hall ballroom dance studio in Tampa, and Judith Baizan, a student of his for the past 15 years, had originally auditioned for the show in a Tampa talent search in 2017 but were not selected.

Then out of the blue, Renee Massie, a casting producer who had seen one of their videos, called Stone early this past December to ask if he and Baizan were still dancing (because of the pandemic). Delighted to hear they were, she asked him to fill out an application and submit a current video.

By Dec. 18, Massie called back to say they “were in,” and they would hear more details in January.

“(Massie) kept in touch about how our routine was going, including the timing of it, which had to be reduced from three minutes and 20 seconds to one minute and 30 seconds,” he said. “Then it came down to costuming. Renee suggested Judith wear something different than the sequin-trimmed, all-black dress she was wearing in the video.” 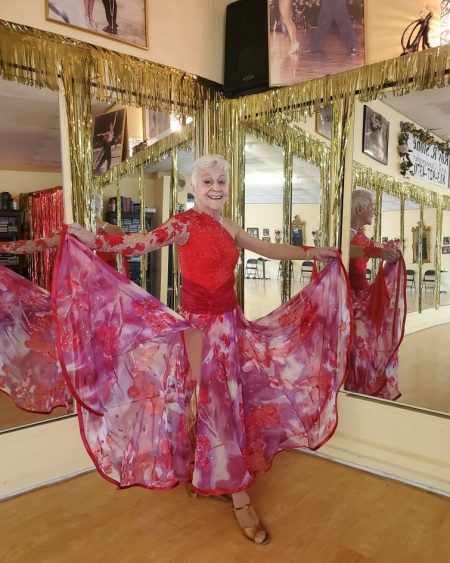 Roy Stone and his student dance partner, Judith Baizan, sat for numerous filmed interviews before ultimately getting on stage to perform before America’s Got Talent judges Simon Cowell, Heidi Klum, Sophia Vergara and Howie Mandell. They received four “yes” votes to move on in the competition.

So Stone called his friend, Maria McDill, owner of Designs to Shine Studio in St. Petersburg and one of the top ballroom dancewear designers in the world, to ask her “to create an incredible dress for Judith.” McDill agreed to do so at no charge, on loan.

“When they saw it, all of the casting directors loved it,” he said. “They were surprised to see all the colors in the dress, which coincidentally were the same colors used in the backdrop of ‘America’s Got Talent.’”

The trip to L. A. was a whirlwind of activity. Stone and Baizan were required to test negative twice for COVID-19, first here at home on April 12, then quarantine for two days after their arrival at the Hyatt Hotel Pasadena on the 15th, followed by a second test on April 17. Then they were told they could move around their bubble – the hotel and its grounds.

The next day, the pair checked into the auditorium of the convention center across the street at 10 a.m. and spent eight hours in interviews and filming for TV to create a story about them and their journeys, particularly Baizan’s. They also had a planned rehearsal time.

April 19 was as intense or more so: more interviews, a dress rehearsal on stage and then the actual performance of an interpretive paso doble before judges Simon Cowell, Heidi Klum, Sophia Vergara and Howie Mandell. They received four “yes” votes to move on in the competition and then flew home the next day.

“It was all very professional and polished,” Stone said. “We were treated like we were celebrities.”

Baizan, who has danced in one form or another since she was a child, said the audition was “fun, intense and exciting and quite an ordeal” for her body. “But it was definitely worth it!”

And she was completely enthralled with the dress McGill had created. She felt like a million bucks wearing it. 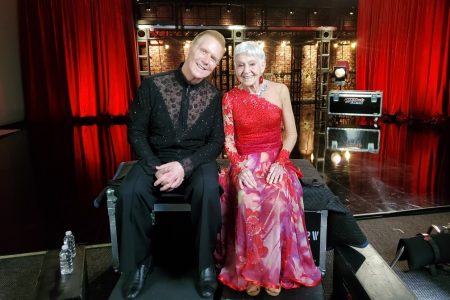 Judith Baizan, 96, was completely enthralled with the beautiful ballroom dress designer Maria McGill, of Designs to Shine Studio in St. Petersburg, created for her.

“We wanted to inspire everyone, and especially seniors, that no matter your age, ballroom dancing is a fun thing to do in your later years,” Stone said. “The music and dancing take us away from our worries, obligations and our everyday routines.

“Ballroom dancing is a great way to meet new partners and move to music we enjoy and recognize, Baizan added. “I’m happy people can be inspired by me,” she added. “I actually inspire myself.”

Stone, who has taught and choreographed ballroom, Latin and theatrical dance throughout the Tampa Bay area the past 43 years, said he hopes to start some sort of complementary class for the residents of Renaissance, where he lives, and surrounding communities in the area.

“My dad died of dementia,” Stone said. “I want to keep my mind sharp by continuing to teach and making people happy.”

To see if this inspiring pair made it into the broadcast of this season’s America’s Got Talent competition, watch the show Tuesdays at 8 p.m. on NBC Channel 8.

LOOSE ENDS Chere Simmons’ retirement is bittersweet for us all