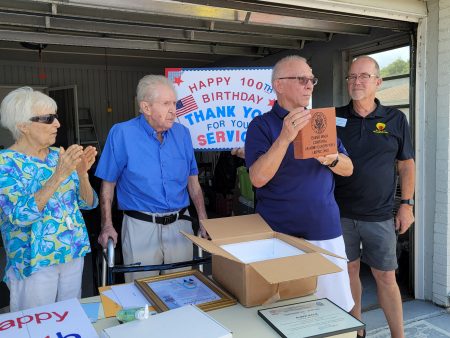 Veteran Elmer Mack had a spectacular 100th birthday on May 19. The community really exhibited its patriotic spirit with a parade of over 100 golf carts and dozens of motorcycles that flowed by the Mack house on Del Webb East Blvd.

“Mack” was overwhelmed with the gesture as well as with the numerous gifts and citations he received from local military groups and the U.S. flag, which had been flown over the U.S. Capitol (courtesy of Congressman Vern Buchanan). In addition, on behalf of the Sun City Center Charitable Foundation, President Walt Cawein also presented him with a complimentary brick for the SCC Veterans Memorial. 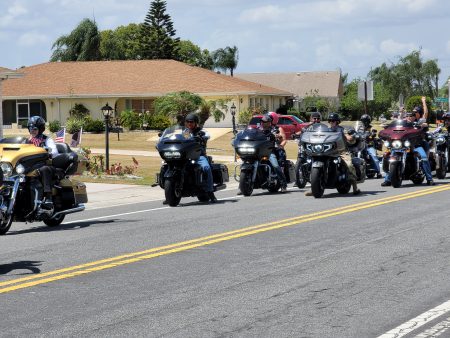 The Patriot Guard Riders and Combat Veterans Motorcycle Association joined over 100 golf carts for a drive-by birthday tribute to Elmer Mack on May 19.

A citation from the Hillsborough County commissioners, presented by Sam Sudman, Col., USA, Retired, reads as follows: The Hillsborough County Board of County Commissioners is pleased to recognize Elmer Mack on the occasion of his 100th birthday, a remarkable milestone in a life of service to the United States that includes aiding in one of the nation’s greatest victories.

Mr. Mack joined the Army in 1942 and landed in Europe shortly after D-Day. For the next three years, Mr. Mack, who rose to the rank of corporal, put his life on the line repeatedly. Cpl. Mack’s bravery and actions in battle resulted in his being awarded five combat ribbons with stars. His contributions to the war effort did not stop there. As a Communications official, Cpl. Mack served as a liaison between the peace negotiator in Paris, the secretary of state and president of the United States. Further, Mr. Mack’s government civilian service spanned more than 30 years and included a position at the Pentagon. After retirement, he and his wife Betty moved from Smithfield, Va., to Sun City Center, a well-deserved relocation.

The Board of County Commissioners of Hillsborough County, Florida, does hereby commend Elmer Mack for his service to the nation, and a well-lived and productive life, and wishes him the happiest of birthdays. 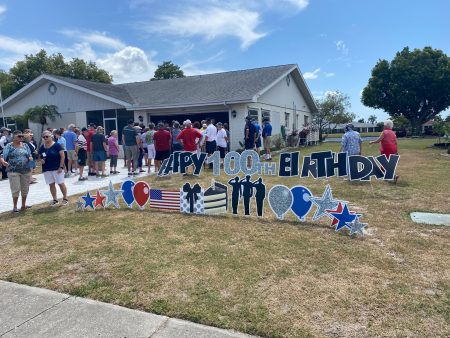 Mack loves to tell stories about his service to our country. He is proud of the fact that he retired after 30 years but was paid for 31 because he took no sick leave. He also loves to talk about his adventures with Betty—touring in their motor home, sailing and then their immersion into an active Sun City Center lifestyle. Between them, they have four children who live in Michigan, Texas, Florida and Virginia. They also have 14 grandchildren and “10 or more” great-grandchildren. He says they have lost track.

Mental health support coming out of the COVID-19 pandemic