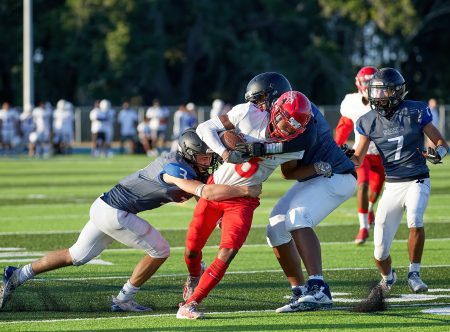 In soccer this type of match is referred to as “friendly.” In the NFL the term for a game like this is an “exhibition” game. In college, clashes of this sort are known as “intra-squad” games. In high school football when teams meet in this fashion, it is called a “jamboree.”

In reality, a jamboree, such as the one staged at Sumner High last Thursday, is a glorified practice in game jerseys, replete with referees and open to the ticket-buying public. The jamboree does not count on the won-lost record. The statistics compiled are for the coaches to analyze and do not go into the record books. In fact, the jamboree, for each team, is just for a half and not even a full game. Jamborees provide coaches, players and fans alike a glimpse of strong points and weak points for the upcoming fall season but are played with enthusiasm and effort. 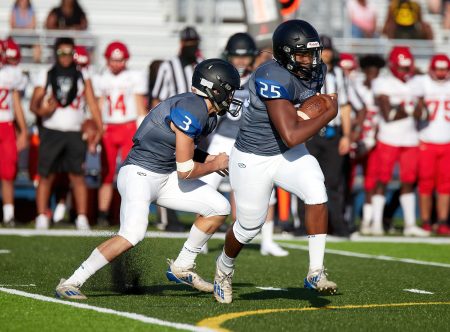 FRANCIS FEDOR FOTOGRAPHY • francisfotography@outlook.com
Riverview Sharks RB (#25) takes the handoff and looks for a hole in the East Bay defense.

With gusty winds blowing from the east, four South Shore high school teams participated in the Jamboree at the sparkling one-year old Sumner football facility May 20. With a large number of fans and spectators on hand, East Bay and Riverview went at it in the first “game” for a half; Lennard and host Sumner tangled in the second half of the Jamboree.

The East Bay Indians featured something new, a head coach, and something old, a proven hot-shot quarterback. The Riverview Sharks featured, unfortunately, the same-old, same-old: the inability to win. With head coach Mike Gottman, a former East Bay assistant coach who has been running the Durant Cougars for the past several years, at the helm, the Indians thrashed Riverview 27-14. 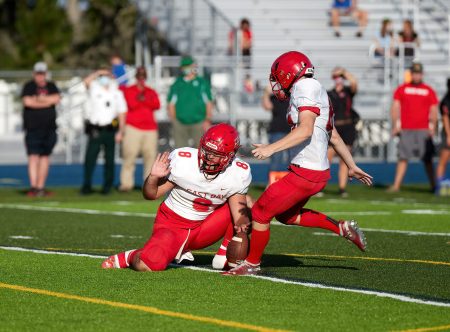 East Bay has rising-junior Nick Carter back at QB. If Coach Gottman can fill in the pieces around Carter on defense and offense, the Indians are hoping to vastly improve on last season’s 2-7 mark. Riverview, on the other hand, continues to search for answers, answers that were not forthcoming in its Jamboree loss. Coach William Mosel held out some key Sharks players due to injures. With some top transfers, who were not eligible for the jamboree, coming in for the fall, Coach Mosel’s Sharks from Boyette Road are looking for a total make-over from last season’s 1-8 team. The Sharks, losers of their last seven games, also lost quite a few seniors from a losing team, which scored only 201 points and was a defensive sieve, yielding 362 points. Riverview’s only win was a 40-0 drubbing over Haines City, everybody’s whipping boy.

In the second-half nightcap, both Sumner and Lennard looked good defensively. Lennard struggled to move the ball consistently, plagued by penalties and a stout Sumner defense. 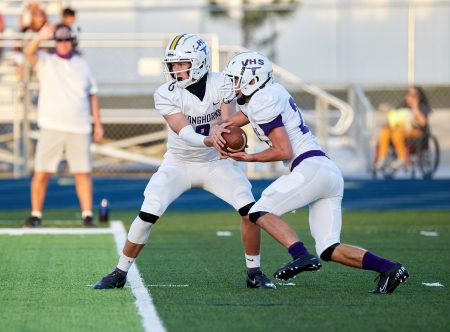 Matt Kitchie, the Lennard Longhorns veteran head coach, and Alonzo Ashwood, at the helm as head coach of the Sumner Stingrays, both expect to build on last season’s records. Lennard went 4-5 and rookie Sumner 7-1 (with a pair of wins over JV teams).

Coach Ashwood remarked about Sumner, “Defense will be our calling card next fall. We have depth at quarterback but no one of the three QBs that played in the jamboree has stood out, although Braxton Maenez threw the last minute TD pass, which helped us outscore Lennard 7-0 in the jamboree.” 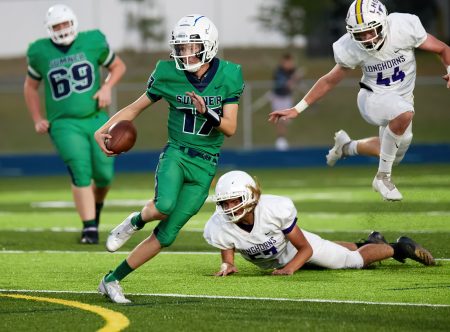 Coach Ashwood said he has three good running backs for next fall: Keoni Denny, Kylan Webb and Devin Spencer, who also star on defense along with Alvondre Lewis, but the Stingrays obviously need work on their offensive line.

In the jamboree, Sumner finally started moving the ball in the waning moments with runs by their QB and #3, Kylan Webb, getting to the Horns 35 yard line. On 2nd and five the Stingray QB Maenez found wideout Edmund Ghent for what ended up being the only score. 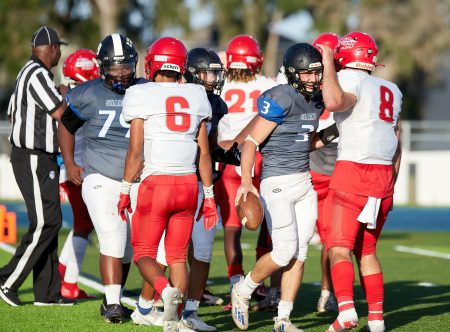 FRANCIS FEDOR FOTOGRAPHY • francisfotography@outlook.com
East Bay Indian player shows sportsmanship with a tap on the helmet to the Riverview QB (#3) after a TD score.

On Sumner’s first offensive play of the half-game jamboree, a pass interference call against the Horns gave the Stingrays the ball deep in Lennard territory. A run stop for a five-yard loss by Lennard’s DE Jacob Treese and a botched snap led to a Stingray punt.

On the ensuing Lennard drive, the Horns started moving the ball with runs from stocky running back Chauncey Jones. Gavin Henley hit some quick passes, leading to two consecutive first downs, but a sack and a failed screen pass led to a turnover on downs. 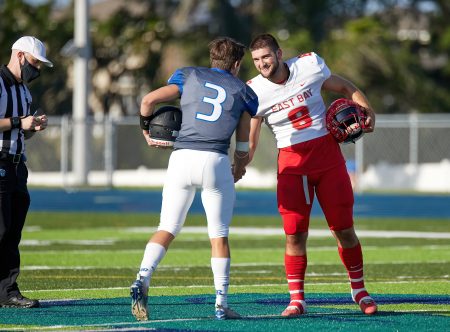 FRANCIS FEDOR FOTOGRAPHY • francisfotography@outlook.com
Riverview and East Bay QBs shake hands prior to the coin toss for the 1st

Sumner’s next drive was a three and out with an impactful 10-yard sack of the Sumner QB by Jahki Davis of Lennard. The Horns quickly took over with a nice run by Jones. That was followed by a 19-yard reception from QB Henley to the Horns’ talented wide receiver Eli Singleton. The Horns seemed to have the momentum for a score as Jones scampered for another chunk gain on a 17-yard run.

This Longhorns’ offensive drive seemed to be in jeopardy until Henley found Hakeem Monroe for a toe-tipping spectacular catch on the sidelines to give the Longhorns a first down deep into Stringray territory. However, Sumner rose to the occasion and, after a couple of incompletions, once again the Horns’ drive stalled. 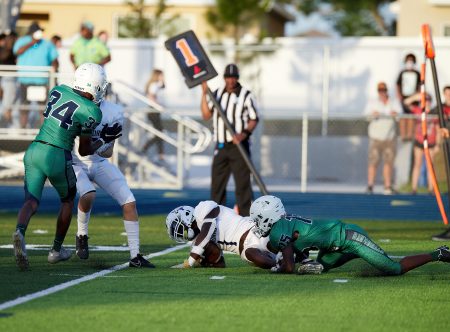 Lennard bowed up and it looked to be another Sumner three and out. But the Stingrays retained possession when their offensive drive was able to continue with a running-into-the-punter call that gave Sumner new life. 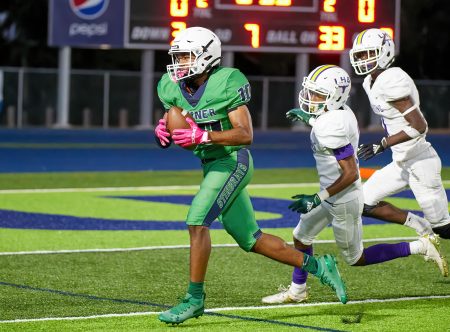 FRANCIS FEDOR FOTOGRAPHY • francisfotography@outlook.com
Sumner Stingray receiver (#10) makes the catch and beats the Lennard Longhorn defenders into the endzone for the only score in the Sumner v. Lennard half of the Jamboree.

The Stingrays took advantage and, finally, hit pay dirt to beat the clock and win the jamboree.