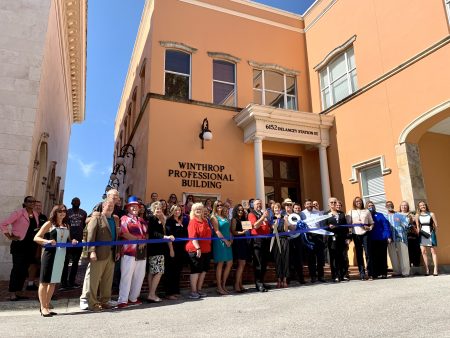 Linda Kenney Photos
Chamber’s strong show-up for the chamber’s own ribbon-cutting for its new offices at Winthrop Town Center.

Chamber officials and members were out in force to celebrate with a ribbon-cutting ceremony the new location of the Greater Riverview Chamber of Commerce in the Winthrop community at the corner of Bloomingdale Avenue and Providence Road.

Chamber members, board members and ambassadors gathered outside the entrance to the second-floor suite of offices and meeting rooms May14 to celebrate the move. A day-long open house was held as well to showcase the chamber’s new space at 6152 Delancey Station St., Suite 205, in Riverview.

Janet Noah, this year’s board chair and community relations liaison at The Bridges Retirement Community, thanked Winthrop co-founders John and Kay Sullivan for offering the space for lease, which came after the expected use of the newly opened Riverview replacement library fell through. The library, with a delayed opening because of the pandemic, is at 9951 Balm Riverview Road. 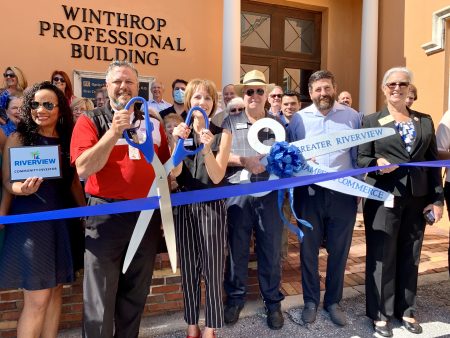 Among those celebrating the Greater Riverview Chamber of Commerce’s move to its new office space at Winthrop are chair-elect Michael Broussard and chair Janet Noah. To their left, is James “Jim” Johnson, board emeritus member; treasurer-elect Christian Beiter; and Hillsborough County Commissioner Kimberly Overman.

It’s the second time Winthrop came through for the chamber, with free space at the Barn Theatre at Winthrop offered back around the time of the Great Recession.

“We were there rent free in the office of the barn for four or five years,” said James “Jim” Johnson, the chamber’s first-ever and only emeritus board member. “But every month we put a rent payment in the bank so when the time came to move, we had the funds to do it.”

Chamber president and CEO Tanya Doran said the chamber again is very “fortunate” to be at Winthrop. The Sullivans, she said, “have a passion and a heart for this community and certainly appreciate the work that goes on in their local chamber of commerce.”

As for the space itself, Brian Henly Lordson, of Lordson Productions, gave a two thumbs-up assessment.

“They say presentation is everything, and this presents them in a stellar light,” Lordson said, during a break in the musical entertainment he provided for the open house. “Tanya’s crew has been extremely successful in this challenging time of pandemic and economic difficulties. They have been the constant heartbeat of the local business community to inspire us to continue with the mission of business success.”

According to Commissioner Kimberly Overman, who was at the May 14 ribbon-cutting ceremony, the chamber’s new location is a great fit for the Riverview community. As for not being in the Riverview replacement library, she said it involved the type of nonprofit designation the chamber has from the Internal Revenue Service, one that allows for political and lobbying engagement, which she said could pose a problem for the chamber using space in the library, which has a nonprofit designation that allows for religious, charitable and educational purposes. As Overman explained it, the library has a 501(c)(3) designation, while the chamber has a 501(c)(4) designation.

Actually, the chamber has a 501(c)(6) designation, which is reserved for business leagues, chambers of commerce, real estate boards, boards of trade and professional football leagues, but Overman’s point stands, in that the chamber at times does engage in political and lobbying activities.

Johnson, who has served on the County’s library board since 2003, said he had expected the issue of a library lease to come before the entire board of County commissioners for a vote, which according to a January 2020 news report had the support of Commissioner Stacy White and library officials.

“It was supposed to be a done deal,” Johnson said, who noted the space had already been built and assigned to the chamber.”

“It was going to be a partnership like they never had before,” Johnson said, noting that in prior years, when the chamber had a political forum, it would use space at the Hilton Garden Inn to avoid any conflicts. 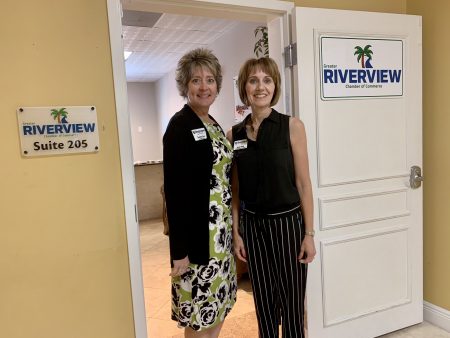 Greater Riverview Chamber of Commerce board member Tammy See, left, with this board chair, Janet Noah.

Being at Winthrop, Johnson said, “is a good fit.”

Mental health support coming out of the COVID-19 pandemic

CHAMBER NEWS & VIEWS To mask or not to mask