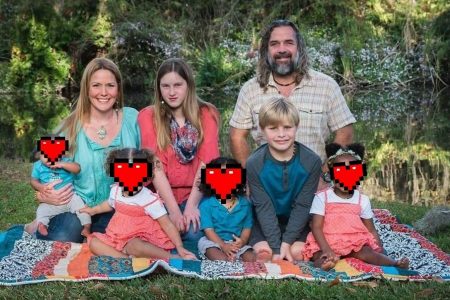 My friend Amanda’s nightmare began on Oct. 11, 2018, when she was charged with aggravated child abuse. Investigators claimed she had intentionally broken the leg of a 6-week-old foster child in her care. It was the most absurd thing I’d ever heard!

I met Amanda more than a decade ago, and I got to know her when I wrote a story for The Tampa Tribune about her passionate commitment to helping foster children. When I interviewed her, I learned she had cared directly for children since she was 15 years old, and she was working as a foster mom for a local Hillsborough County agency. She was a 34-year-old stay-at-home mom, caring for her son, Rayne, and adopted daughter Lexy – her first foster child, a severely abused 18-month-old toddler. She was also fostering two babies.

I have to admit, I was truly amazed by her and how dedicated she was to these kids. It wasn’t just a job for her. It was her life. Over the course of the 10 years she was a foster mom, Amanda estimates she took care of between 40 and 50 children. Some stayed overnight in emergency situations, some for years.

When Amanda was charged with child abuse, she turned herself in and pled not guilty. She knew she was innocent, and she never imagined a criminal case would be brought against her. She cooperated with law enforcement completely.

But her innocence didn’t matter. A pediatric physician at the hospital where she had taken the child suspected her involvement, and a child protective services medical team agreed. As a result, the baby and two other foster children in her home were immediately removed from her care, one of whom she had mothered for more than three years. Amanda was devastated.

A judge immediately ordered she had to be supervised by her parents, ex-husband and life partner whenever she was with her newborn baby, Connie. She had to constantly be in one of their presences. It wasn’t until three years later, the order was amended to include anyone over the age of 18.

Despite the outrage of and many character references from prominent community members and lack of a thorough investigation into the allegations against her, the state attorney’s office was unrelenting.

What turned things around was Amanda’s hiring of a new lawyer last August, prominent Tampa criminal attorney Rick Escobar, who drastically reduced his fees to help her. He conducted his own investigation, which determined the baby she had allegedly abused had an undiagnosed vitamin D deficiency that most likely caused the broken bone. The wrong vitamin D test had been ordered in error, and the baby’s prenatal records were never reviewed. Despite these findings, the child protective team would not budge. Thankfully, the state’s attorney’s office did, and the case was dropped May 14.

Amanda went through a living hell. She was tortured by the idea that anyone could think, let alone believe, she could or would willfully hurt a child. The experience ruined her reputation as a model foster mom, caused her to lose her foster kids and left her family’s finances in shambles.

Everything changed in the family’s routine and in their home. Her children couldn’t even have birthday parties or sleepovers with other kids. Their extracurricular activities were severely limited. It was beyond difficult for them and their parents.

Without Escobar’s dogged persistence, Amanda would still be facing a first-degree felony, punishable by seven to 30 years in prison.

Amanda told me recently she has learned much from this horrific experience: what’s important in life, how resourceful we can be when needed and that life can change in a moment. She acknowledges she got through this roller coaster ride by relying on the love and support of her family, friends and community. She is grateful.

Although the legal system she blindly trusted failed her for years, justice has finally been served. Amanda’s ordeal has ended. Unfortunately, until some changes are made in this system, another poor soul’s nightmare may have just begun.

Lois Kindle is a freelance writer and columnist for The Observer News. Contact her at lekindle@aol.com.

Just Yesterday It’s All in a Name By Cathy Meyerho