It’s bee swarm season, but there’s no need to kill them; call the bee whisperer 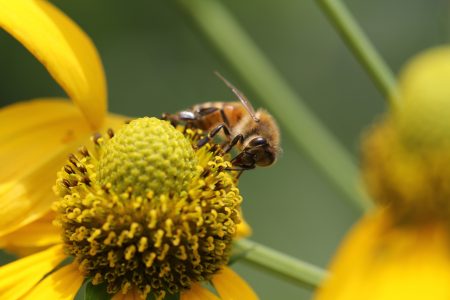 SAM GOODWIN PHOTO
Honey bees pollinate flowering plants and collect pollen and nectar from them to take back to their hives to convert the pollen into high-energy bee bread to feed their young and change nectar into honey. Honey bees are but one of more than 2,000 species of bees in the world.

It’s bee swarm season, but there’s no need to kill them;
call the bee whisperer

It’s bee swarming season, but there’s no need to kill what some scientists call the most important species on earth. If you have a bunch of bees trying to set up home on your property, call Sam “the Bee Whisperer” Goodwin or another licensed area beekeeper to have these essential “intruders” moved.

Swarming is a natural process in the bee world. When their colonies becomes too crowded, about half of the bees in the hive fly off to start a new hive. This usually coincides with the blooming season of plants when nectar and pollen are abundant.

“Bees can create a hive in any cavity – trees, rock crevices, wall of a home or car, even a water meter,” said Goodwin, 68.
But there’s no reason to panic when they show up.“There are numerous methods for removing unwanted bees,” he said. “A swarm in the open is normally easy if it’s not too high up. I shake them into a hive and hope the queen falls in with the swarm. Better yet, I catch and cage the queen, and the rest of the bees will march into the hive voluntarily.

“For bees in walls, trees or other cavities, I use trap outs, [a process called] forced abscond and cut-outs,” he added. “I won’t try to handle anything [that] my age or common sense dictates otherwise, but I will help locate the bees and advise anyone who contacts me.”

The Apollo Beach resident, Army retiree and former defense contractor grew up in Ruskin and graduated from East Bay High School. He started beekeeping eight years ago with four backyard hives in Lorton, Virginia. By the time he moved back to Ruskin last year, he had 10 hives to bring with him and actually moved his bees to the Circle Pond Tiny Home Community even before finding a home for himself and his wife Linda.

LOIS KINDLE PHOTO
Sam Goodwin, registered and state licensed beekeeper of Apollo Beach, starts a smoker in preparation for working with his bees. The smoke calms the bees and enables him to check the colony for the health and well-being of its occupants.

Honey bees pollinate flowering plants and collect pollen and nectar from them to take back to their hives.

As a registered beekeeper licensed by the state, Goodwin is qualified to inspect hives annually to certify bee health and to give advice, as needed. He provides his bee-removal services for free out of love and respect for the tiny creatures.

“I’m fascinated with their behavior and their role in the circle of life,” he said. “I enjoy being outside and working with nature. Beekeeping enables me to do both.”
“Sam eats, drink and sleeps bees, and he’s continually learning and educating others,” said Debbie Caneen, Circle Pond Tiny Home Community owner. “Bee numbers are drastically declining, so rather than grabbing a can of insecticide, call him so they can be rehomed rather than killed.”

SAM GOODWIN PHOTO
Honey bees returning to their colony crowd around the landing strip of their hives. Amazingly, there are 40,000 to 60,000 bees in a strong, healthy colony.

While the public can’t do much about the mites, virus or parasites, we can stop using harmful pesticides or herbicides around our homes and gardens. We should try researching some bee-friendly alternatives and plant flowers and herbs they like, including lavender, honeysuckle, marigolds and mint. They especially like these colors: purple, violet, yellow and blue. Supporting organic farmers can also help bees.

SAM GOODWIN PHOTO
Every honey bee serves the hive in one way or another. Here, workers are shown rallying around the queen, feeding (see dot) and caring for her, but if she loses the ability to lay enough eggs or become injured, they’ll replace her. A healthy queen lays 1,000 to 1,500 eggs per day.

“Bees are a great environmental health indicator, and they pollinate one-third of our food supply,” Goodman said. “We can’t afford to ignore them.”

To purchase honey, request bee removal or arrange a class for children, Scouts, small groups or prospective beekeepers, email him at bees4sam@gmail.com. 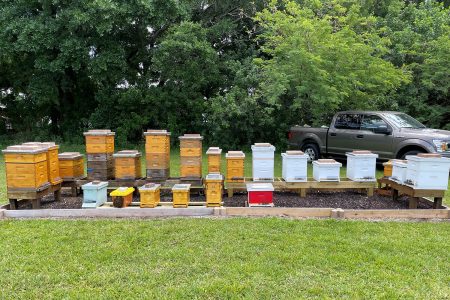 SAM GOODWIN PHOTO
Beekeeper Sam Goodwin’s bee colonies are shown here at Circle Pond Tiny Home Community in Ruskin. The number of hives keeps growing as he rescues bees that have swarmed to properties where they’re unwanted. He provides the service for free. 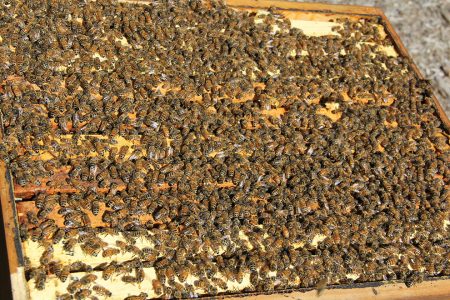 SAM GOODWIN PHOTO
Pictured here is a frame temporarily removed from a healthy honey bee hive. The worker bees are constantly working to make enough honey to feed the queen and her brood. 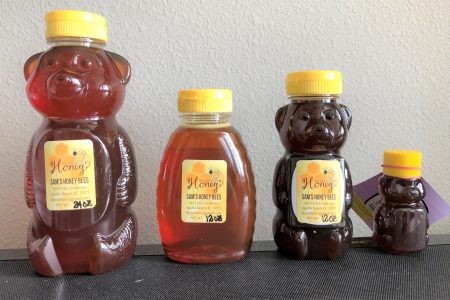 SAM GOODWIN PHOTO
Registered and licensed beekeeper Sam Goodwin sells honey from his hives in jars of three sizes. The cost is $2 for two ounces; $8 for 12 ounces; and $15 for 24 ounces. To purchase some, email him at bees4sam@gmail.com. 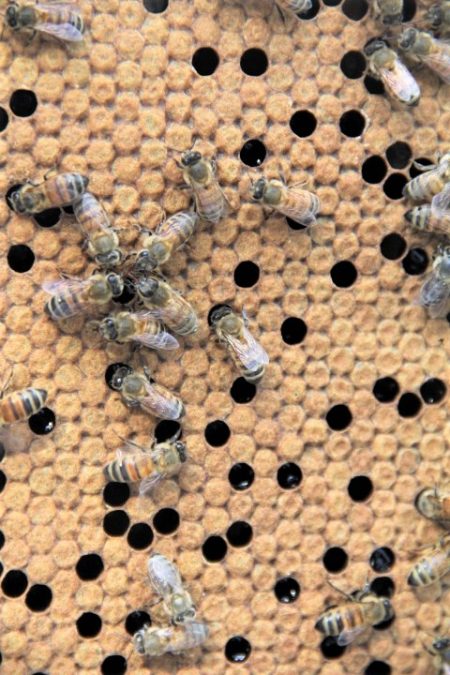 SAM GOODWIN PHOTO
Nurse bees are recently hatched honey bees who turn around after they’re born and clean out the cell they came from so the queen can come by and lay an egg in it. The capped cells in this photo contain bees developing from larva until they’re fully form, and the uncapped cells are freshly laid eggs or larva being fed and not ready to pupate. The nurse bees move on to other jobs as they age. 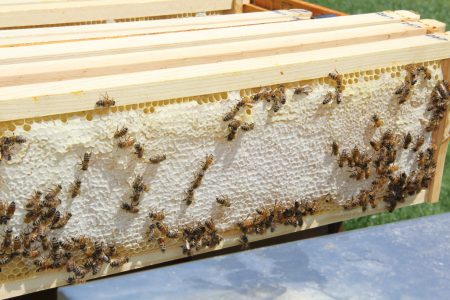 SAM GOODWIN PHOTO
Honey bees work on a mostly capped honey frame, storing winter food. They fan, add enzymes and evaporate nectar until it reaches 17% moisture level. When that occurs, they seal each cell with a wax capping. 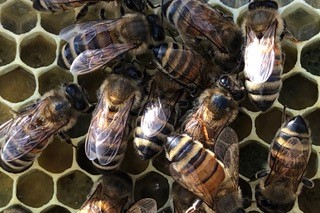 SAM GOODWIN PHOTO
Honey bees are considered nature’s best engineers. Shown here worker bees toil tirelessly over their short six weeks of life, building comb, storing food, cleaning, brood rearing, guarding, collecting food and taking care of the queen. The comb they build is made is of wax, stands up to repeated use for many generations of bees and wastes no space.