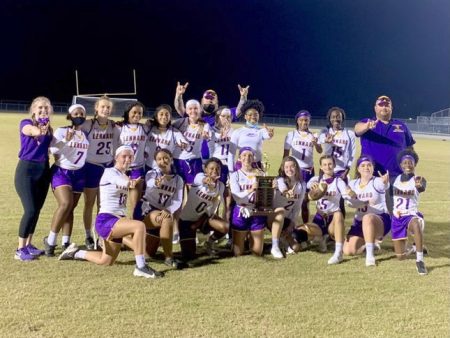 Lennard High’s flag football team recently concluded an amazing season with a 15-3 record under Coach Travis Combs. Only a 20-0 loss to Newsome in the District title game put a blemish on a successful season in exciting 2A-D8 gridiron action for these young women. And for the record, Newsome High of Lithia, subsequently, romped through the 2A playoffs to win the state title, 20-19, over Western High of Davies, Fla.

The field general for the Longhorns, Abby Ewell, played with her hair on fire the entire season. Combs remarked, “I said at the beginning of the year that I believed in freshman Abby Elwell to be our quarterback. She had a record of 14-3 (missed Brandon game). Ewell threw for 44 touchdowns and over 3,000 yards. Freshman quarterbacks don’t do that on a varsity level!
“The future is so bright for us,” added Combs in an understatement.

Combs said “At the beginning of the year, our goal was to practice and compete for a state title. Now we ultimately did not reach the state title game, but for my first full season as the coach of Lennard flag football, I could not be more proud of a group. We got the school and the community fired up about flag football at Lennard.”

For the dynamic season, the high-flying Lennard flaggers tallied 434 points and coughed up only 96. That’s an average of 24 to 5 plus. In the playoffs, the Longhorns beat Palmetto and trounced East Bay before dropping the Newsome finale. Combs is proud to point out that the 2021 season was filled with a lot of firsts for the program:

Katie Paskert, #2, runs in for the touchdown while #10, Lexi Mosley, celebrates.

“Lennard also now has a perpetual trophy with Riverview that we started this past season,” beamed Combs. “Since I got my coaching career started at Riverview as the defensive coordinator, and now the Riverview head coach was the offensive coordinator when I was there, we are really good friends, so we decided to make a trophy called ‘Survive I-75.’”

Lennard won the inaugural trophy in a great battle with the Sharks, 14-6.

What’s next is Lennard’s offseason flag football program, starting June 1 with the travel team called “South Shore Stampede.” The flag football team banquet is also next on the agenda, May 13 in Ruskin.

Coach announces that any Lennard students interested in playing for the offseason Stampede team should visit Longhornsflagfb.com/.

The perennial powers in this neck of the woods, and, actually, statewide have been Robinson and Alonso in Tampa. However, Newsome is now state champ and returns rising-senior and a ‘wonder woman’ quarterback in Devyn Silvestri. Along with the ascendancy of Lennard’s program under Combs and proven QB Ewell, the balance of power could be tipping to the South Shore. 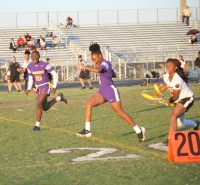 Those two other Hillsborough County teams on the west side of Tampa Bay in Robinson (Class 1A champs this season) and Alonso (Class 2A power) have sat atop the food chain of Florida flag football for quite some time. Both teams’ excellence and eminence, resulting from each team’s multiple state titles in recent years, led to being noticed by Nike, which filmed a commercial promoting flag football. Not only is flag football fun to play, it is fun to watch. It could be just a matter of time before flag football becomes an NCAA sport.

Jennifer Bevel intercepts a pass in the Longhorns’ game against Palmetto. Daija Fanning, #15, runs alongside her teammate, cheering her on.