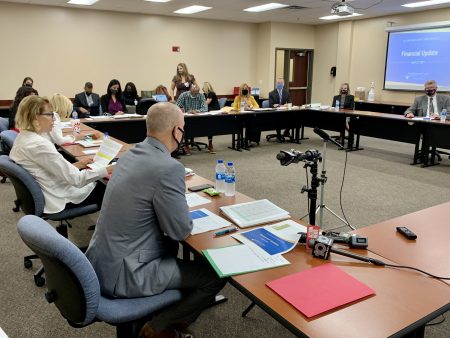 Superintendent Addison Davis, with school board members and members of his leadership team, at the April 27 board retreat. LINDA CHION KENNEY PHOTOS

As school officials address the financial crisis that put Hillsborough schools in the crossfires of state financial receivership, Superintendent Addison Davis has been tackling as well an unsettling review of his leadership style.

Meanwhile, school board members were set to meet Tuesday, May 4, to continue discussing a professional development plan for Davis and again on Thursday, May 6, to continue its work on a financial recovery plan that Florida Education Commissioner Richard Corcoran said was necessary to avoid a state takeover of financial oversight.

In a letter dated April 22, Corcoran said Hillsborough’s plan must be received within 20 days of the letter’s receipt. It also must show “how expenses have been and will continue to be reduced and that reasonably demonstrates that the district has a plan to resolve its financial emergency for this fiscal year and the next.”

School board members first met to discuss both the survey and a financial corrective action plan at an April 27 meeting held in retreat fashion. Davis since then has met with state education officials in Tallahassee, and this is to be discussed in public at the May 6 special board meeting.

Meanwhile, in a letter dated April 26 and addressed to principals, assistant principals and administrators, Davis said he was thankful for the “honest feedback” received via a survey created and distributed by the Hillsborough Association of School Administrators (HASA). Davis, the first superintendent in 50 years to be hired from outside the school district, stepped into his job in June.

Through email, HASA officials distributed the 20-question survey to its membership April 18 and received responses through April 22. In all, 523 members participated in the survey, which allowed for anonymous replies and requested that each respondent answer all 20 questions.

Roughly three in four respondents expressed “agreement” or “strong agreement” with 16 statements that questioned the efficacy of Davis’ leadership style in areas such as collaboration, communication, decision-making, as well as the level of trust and respect felt by HASA members.

Calling receipt of survey responses “one of the hardest days of my career,” Davis said, “The feedback and resulting board member discussion reflected a person I do not know and one I will dedicate the rest of my career to ensuring does not come up again.”

Calling himself “a principal first and foremost,” Davis said he “never wanted to hear my colleagues asking for greater opportunities to connect and communicate with their superintendent, especially during a time when school and district leaders have done so much for our students, employees and community at large under one of the worst conditions in our professional history.”

Aside from dealing with pandemic concerns, Davis for months has been telling board members the funding issues they face have been festering for years, driven in part by the practice of using capital outlay and grant funds to cover a general operating shortfall. Also affecting the bottom line are losing students to charter schools and state funding that since the first budget of the 2007-08 school year, when the Great Recession struck, has not kept pace with inflation, student growth and new expenses required by state legislation.

“I understand that I represent a significant change for [Hillsborough public schools] because I am new to all of you and to this community,” Davis said in his April 26 letter to school-based administrators. “It was always my goal to spend the majority of my time listening and learning under the best of conditions, let alone ones like we have faced in the past year. The challenges connecting with each other have resulted in unintended misunderstandings on my part that I stand ready to correct as we work to improve the overall health of Hillsborough County Public Schools, as well as help me build a relationship with you as a colleague.”

Davis has his work cut out for him, according to HASA survey results. Roughly nine in 10 respondents said they “strongly disagreed” or “disagreed” with the statement that under Davis’ administration, “decisions and subsequent changes are well-thought out, reviewed, discussed and shared with stakeholders prior to implementation.”

Likewise, 87.8 percent of the respondents “strongly disagreed” or “disagreed” that there was “an atmosphere of mutual respect and trust within the district.”

For their part, HASA respondents left nothing to the imagination when it came to describing their deep concerns with Davis’ leadership style, offering 68 pages of comments in small font and tight format to expand upon their concerns.

For his part, Davis closed his letter noting his intent to convene a Principal Advisory Council and stating that he understands “better now than ever before” the words of Theodore Roosevelt, that “nobody cares how much you know until they know how much you care.” 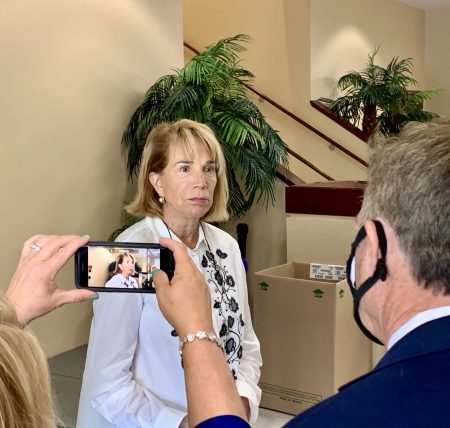 School board chair Lynn Gray answers reporters’ questions after the April 27 board retreat. 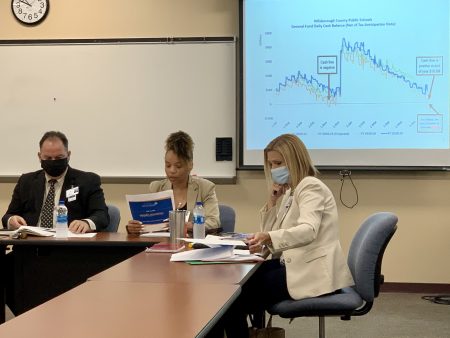