Lifeline device provides peace of mind for many SCC residents 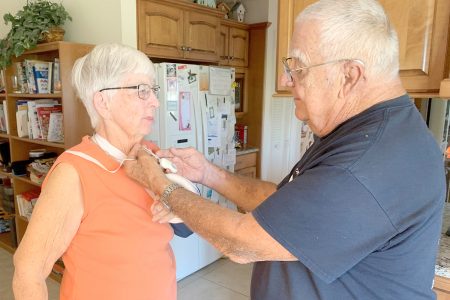 LOIS KINDLE PHOTOS
Pete Blair, 85, rehangs his wife Margie’s Lifeline AutoAlert button around her neck at their home in Sun City Center. She recently experienced serious injuries when she fell on their lanai and summoned help with the device.

When Pete Blair’s wife Margie fell on their lanai April 21, he was at home in the garage but had no idea she had taken a spill.

“The first time I knew something was wrong was when the (Hillsborough County Fire Rescue) ladder truck from Station 28 pulled up in front of the house,” he said.

When Blair, 85, saw the paramedics approaching, he thought someone might be pulling a prank, but he soon learned they were responding to a Lifeline call his wife had initiated on the fall protection device she was wearing. The central agency monitoring her Lifeline saw the alert and called for help.

“(The monitoring service) first tried notifying the SCC Emergency Squad, but an ambulance wasn’t available,” said Blair, who is a volunteer EMT on the squad. “The dispatcher told Lifeline to call 911, which immediately went to Fire Rescue.” 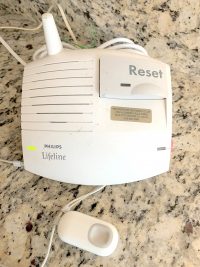 This is the Lifeline with AutoAlert personal emergency response system Pete Blair obtained for his wife Margie through the Men’s Club of Sun City Center after she fell and broke her hip in 2014. Recently, she used it to call for help after she fell on her lanai.

Margie had tripped and fallen, was on the floor and there was a sizable pool of blood around her head.”

After initially checking out Margie’s condition, the paramedics called for one of their ambulances to take her to South Bay Hospital. It turned out she had a broken arm, laceration over her left eyebrow and chest pain, possibly due to a bruised rib.

Had it not been for her Lifeline personal emergency response system, who knows how long she would have lain there in pain on the lanai.

In 2014, Margie fell and broke her hip and would never have been able to get up on her own, but Blair was home to assist her. The decision was made when she was recovering in rehab to get her a Lifeline device with AutoAlert from the Men’s Club of Sun City Center.

It was a solid investment.

“If you wait until you need one, it’s too late,” Blair said. “But if you already have one, it’s worth its weight in gold. My advice as an EMT and as someone who’s seen the need for it first hand, this little device could mean the difference between life and death.”

He means business, and he can tell you why.

“I responded to a call where a guy had been in the bathtub for three days before it was discovered he needed help. He was so weak by the time help arrived, the paramedics had trouble lifting him,” Blair said. “Another time, a woman had fallen on her sidewalk at 10 a.m. one morning and not found by anyone until 4 a.m. the following day. The temperature had fallen into the 50s (degrees) overnight, and she got wet from her automatic sprinklers. Someone finally saw her on their way to work. She was almost hypothermic and damn-near bought the farm.

“Everyone thinks, ‘I don’t need one of those,’ but lots of tragedies happen when they don’t.”

“The (SCC) Emergency Squad gets several calls a week from Lifeline,” said volunteer EMT Robin Watt, asst. chief/public relations. “In some cases, the resident is unaware they’ve called and are surprised when we arrive. But many calls are from someone who’s fallen and needs help. 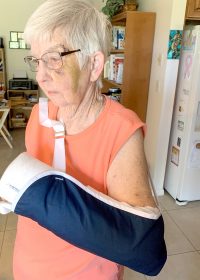 Margie Blair, 83, had to be taken by ambulance to South Bay Hospital by Fire Rescue paramedics who responded to a call from Lifeline’s monitoring service April 21. A trip-and-slip accident on her lanai left her with a broken arm, laceration over her left eyebrow, black eye and chest pain from a possible bruised rib.

“One of the best features about Lifeline is it maintains information on where the client’s spare key is hidden and names of neighbors or family to contact in case of emergency,” she added. “Often the neighbor arrives first and is there to let us in. But many times we have to search around the exterior of the home to find a key or an unlocked door.”

Watt insisted her father have a device, even though he lived with her and her husband. As an active couple, they were frequently out of the house, and her dad had a history of falls.

“On one occasion, and there were a few, I was off duty working at the squad in my office, when Lifeline called and said Dad had fallen in the garage,” Watt said. “Both of our ambulances were out on other calls, so Chief Bardell, one of our volunteers and I rushed to my house. When I opened the garage door, I could see him lying on the floor in front of the work bench. We checked him over and then helped him up. Thankfully, he wasn’t injured, but he could have been.

“Fall buttons are really lifesavers,” Watt continued. “I strongly suggest if you live alone or are often alone, you should get one. They’re not just for falls; they’re for any emergency.”

The Men’s Club of Sun City Center provides the Philips Lifeline Personal Emergency Response System to residents of the community. It enables a resident to live alone and have ready access to the SCC Emergency Squad, Hillsborough County Fire Rescue first responders or Hillsborough County Sheriff’s Office deputies who can help them in an emergency. The program is especially important for people who live alone, are disabled, are recovering from surgery or are dependent caregivers.

Offered by the club for more than 20 years, the program is provided at a significantly reduced cost due to the club’s nonprofit status and large number of volunteers to help with its implementation.

The device is worn on a neck cord or wristband, where it can easily be activated. When that happens, a response associate stays on the line until responders arrive.

Currently three options are available: Standard, Lifeline with AutoAlert and GoSafe Mobile Help. Fees generally range from $25 to $40 per month for around the clock assistance 365 days of the year; however, the club will help residents who need financial assistance. Installation, service calls and repairs are free, and all are waterproof and can be worn in the bathtub or shower, where fall incidence is highest.

The device makes a difference. In 2016, for example, Lifeline responded to 546 calls for assistance in greater Sun City Center, and more than a fifth of them resulted in transport to the hospital.

Why not provide yourself, your children and anyone who cares about you the peace of mind that comes from knowing you’re able to obtain help quickly in any emergency?