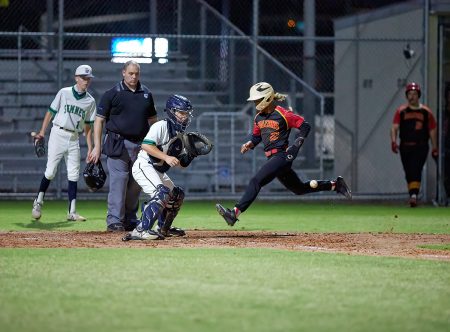 Only East Bay has a shot. The Indians played 13-7 St. Petersburg April 27. The winner advances to the 6A-D10 championship game April 29 against the winner of top seed Bloomingdale and four seed Largo. Champ and runner-up advance to regionals next week.

If you win, you keep advancing in the district brackets. District champs and runner-ups then start at it again in regional play: May 6 for 5A and May 7 for 6A and 7A.

In first round 7A-D8 play April 26, the Lennard Longhorns dropped a 2-1 heartbreaker to Lakewood Ranch. The Longhorns finished 9-13. Opening D8, the Riverview Sharks banged out 10 hits but could not hold off Newsome. Riverview lost 5-3 to the Wolves to end the overall season at 12-12.

Spoto and Sumner both lost in 5A-D8 diamond duels Monday. The Spartans were shutout by Brandon 6-0 to conclude a 2-19 campaign. Meanwhile, Sumner was walloped 10-2 by King. The Stingrays packed in their equipment and a lot of experience in a 3-15 rookie year.

Closing out the regular season last week, East Bay lost twice and fell to a 15-8 record. Both Indian losses were by identical 4-3 scores, first to the Durant Cougars and then to Plant. Coach Cody Crouse’s Indians could only muster three hits against Durant. Senior Ethan Sillert went two for four and two RBIs. Jeremy Galen had the other East Bay hit. The Indians’ top three hurlers, Ben Bostic, Andrew Pierce and Manny Dooley, yielded six hits to the victorious Cougars. Plant nicked East Bay pitchers Javy Lopez and Tanner Elizondo for six hits later in the week. Jeremy Galen went two for four at the plate for the Indians in the loss at Plant.

Sumner ended its 3-14 inaugural regular season on a losing note, dropping games to Middleton and to Leto in a mercy rule contest at home. In the 14-4 loss to Leto, Coach Kennedy Duran received another good offensive performance from junior Joe Cabrales, a .317 season hitter. In the Leto rout, Cabrales went two for three with four RBIs and hit the Stingrays sole home run of the season.

Lennard won its last two regular season games. Coach Victor Martinez’ Horns took the measure of Blake early last week 14-2. Sophomore Logan Covey had a big night, going two for four with four runs and an RBI. Also at the plate, senior Luis Rivera was three for four with two runs scored. Lennard took advantage of five Blake errors and 10 walks. Kamran Patel, John McCool and Stephen Rodriquez handled chores on the bump. Later in the week, freshman pitcher Zack Bird was masterful in a 3-0 shutout over Spoto. Junior Sebastian Munoz continued his good work with the bat, on a two for four night and a pair of runs. Soph Tyler Ewell posted two for three and an RBI. Bird allowed only two hits, only walked one and struck out nine.

Spoto picked up its second win of the regular season April 21 over Armwood 3-1. The 2-18 Spartans of Coach Mike Boyd received a complete game from Cullen Cairns. Freshman Cairns gave up only three hits, one run, one walk, and notched three whiffs.

The 12-11 Riverview Sharks split a pair last week. After losing to Plant 3-1, the Sharks of Coach Josuha Smith bounced back to top Robinson 4-1. Riverview’s senior Lukas Chunn pitched six plus innings and gave up five hits and the lone run. Chunnn also was one for three at the plate and received offensive support from soph Andrew Rodon with two RBIs and senior Kipp Kochera with a two for three game and two runs. In the loss at Plant early in the week, the Sharks only got one hit, a Farrah Castillo single, and wasted a good mound performance from junior Nate Hook. 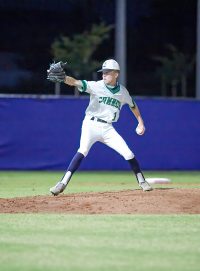 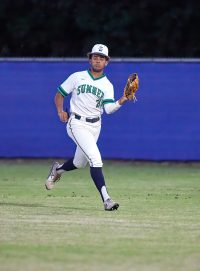