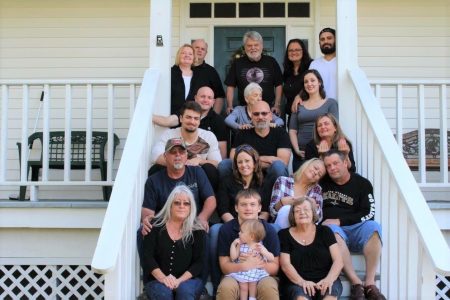 Ron Wolfe, top row, center, is surrounded by many of his family members in a photo taken on the steps of his home in Ruskin on Thanksgiving Day 2015. The annual gathering was “always filled with love and laughter,” said granddaughter, Heather Barr, second from left, second row.

Ronald Joseph Wolfe, of Ruskin, died April 7 in hospice care in St. Louis, Mo., near his daughter, Rhonda Dahlberg. He was 88.

Originally from New York, he grew up in Chicago and moved to Florida in the mid-1970s, after serving in the Air Force for five years. He lived in Temple Terrace, Hacienda Heights, Riverview and then lived in Ruskin from November 1996 through July 2020. For the final months of his life, he lived with family.

He was founder, president and CEO of Arjay Group Inc., a business advisory firm helping to start businesses and buy, sell, grow or liquidate them. He also financed some of his clients and helped them improve the performance of their businesses. His tagline was, “Business is the business of business.”

“Ron would come with us when we would go as a group to address the Hillsborough County Commission on all kinds of community issues, including the Ruskin Community Plan, many land use hearings and the founding of Camp Bayou as an environmental learning center,” said current Hillsborough County Commissioner Mariella Smith, recalling her days of community activism. “He would lend our group the air of an elder statesman with his talent for speaking and gravitas. He was a great community member and just a nice guy.”

“Ron was always engaged in the community and cared very much about Ruskin,” she said. “If he were here, I’m sure he’d have a lot to say about what’s going on now: the redevelopment plan with the University of South Florida, lack of infrastructure and unchecked growth.

“He was did his research, was very detailed and a hard worker,” Council added. “He was a very generous person.”

Wolfe was preceded in death by his first wife Muriel D. “Toni” Wrightnour in 2008. They had three children: son, Michael Wolfe, of New Port Richey; and daughters, Pamela Wolfe, of Chicago; and Dahlberg. His second wife, Rose Ella Wright, the mother of his three stepdaughters: Bridget Fagan, of Ruskin; Rose Erin Spiers, of Ruskin; and Cathy Lopez, of Apollo Beach, were married until she died in February 2020. All of the children between them survived his death.

He is survived by grandsons, Jared Lopez and Steven Fagan Jr., and granddaughter, Heather Barr. “Grandpa was always welcoming, always so open-armed and uplifting,” Barr said, holding back tears. “He was generous and caring. His smile went on for days. We miss him terribly.”