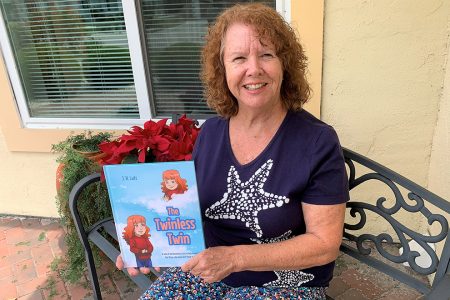 LOIS KINDLE PHOTO Jennifer Lutz, of Sun City Center, is shown here holding a copy of a book she wrote, called The Twinless Twin: A tale of bereavement and enlightenment for those who have lost their twin

Sun City Center resident Jennifer Lutz lost her identical twin, Georgia, to a tragic accident just before their 5th birthday. She witnessed the entire incident, where a truck backed over her sister, causing her immediate death.

“I ran to my grandmother and told her what happened, then sat in her lap, while she made some calls,” Lutz said. “I was there physically, but I mentally went into a fog, which lasted for the next four years.”

Losing a sibling is difficult for any child, but for twins the experience is like losing a part of themselves, Lutz said. There is an inexplicable sense of deep loss and abandonment.

When she turned 9, Lutz said the fog finally lifted, and she felt she had returned to earth.

“One summer day I was sitting outside, and I suddenly pinched myself and realized I was alive,” she said. “Georgia was just ‘over there.’ I felt the presence of two angels holding me up, supporting me, a feeling that lasted until I was about 13 and gradually faded away.”

After what she called an “awakening,” Lutz began asking her grandmother about where do we go after we die? Do we really die? What happens after that? Her grandma began sharing her books on spirituality, which led the child to start forming ideas about the truth of her existence.

“It began a very spiritual journey, one that has lasted my entire life and culminated in my ordination as a lay minister of All Paths to God (New Thought) Church in February.”

Lutz, a former English teacher, self-published a book called The Twinless Twin: A tale of bereavement and enlightenment for those who have lost their twin last fall. She said the idea for it came about in the late ‘90s, but the book wasn’t written until 2000 and published only after she found Covenant Books to do the illustrations.

It is, of course, dedicated to Georgia and all other identical twins who’ve experienced a loss of their other halves. It is also dedicated to Dr. Raymond Brandt, former editor of Twinless Twins magazine, for his encouragement and support, and to her husband Chuck and daughter Tarrin for pushing her forward.

“Putting pen to paper has released the healing process that started when I was nine years old and took a lifetime of searching to complete itself,” she said. “I hope my book inspires and brings comfort to all those who have lost someone so dear to them.”

“Writing can be a journey of discovery or a path to healing,” said Linda Bleser, of Sun City Center, who has published more than a dozen romance novels. “Jennifer spent a lifetime dealing with the loss of her identical twin and the spiritual events that transpired afterward. Her book is told in a simple, straightforward fashion and gives hope and comfort to others who have suffered a similar loss.”

The Twinless Twin by J. H. Lutz is a book on grief, healing and spiritual awakening. It’s the true story of Lutz’s tragic loss of her sister and then her magical trip to heaven to learn about life, death and our purpose here on earth. 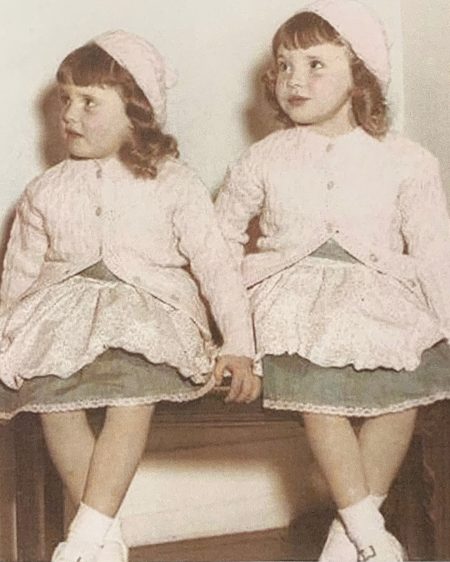 This is a photo of Jennifer Lutz, right, and her twin sister, Georgia, not long before Georgia’s tragic death at age 5 more than seven decades ago. Her passing set in motion a lifetime spiritual journey of seeking the meaning of life and death for Lutz. 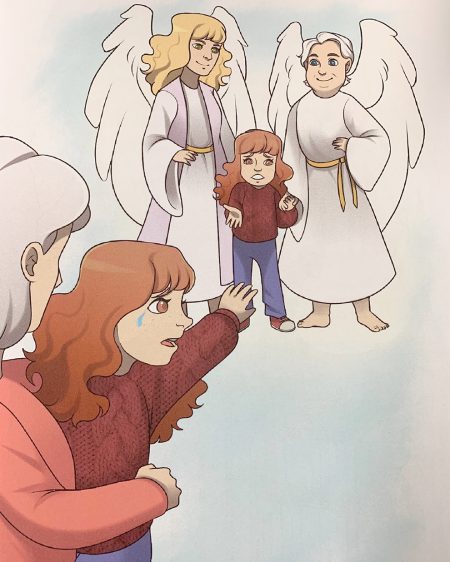 Pictured is one of the illustrations from the The Twinless Twin: A tale of bereavement and enlightenment for those who have lost their twin by J.H. Lutz.