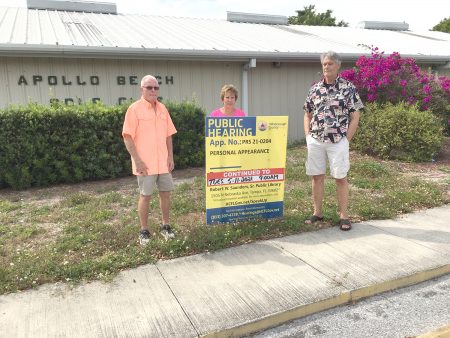 STEPHEN FLANAGAN JACKSON PHOTO
These three Apollo Beach residents do not like nor want the proposed new development of the privately-owned Apollo Beach Golf Club, which is the subject of a County commissioners’ land use public hearing May 11. In front of the shuttered golf course are, left to right, Paul Ryan, Fran Wilson and Stephen Jones.

Apollo Beach was conceived as a planned community paradise, laced with canals, as far back as the 1930s. That reality finally started full swing in the 1960s. Now, Apollo Beach is a thriving area of some 18,000 people ­— bursting at the seams. And all that is evolving as the hyper-developed Apollo Beach continues unbounded development like topsy turvey in all directions except toward the west, which is bounded by the waters of Tampa Bay.

A developer is eyeing the defunct, once-pristine golf course, owned principally by billionaire Roger Penske. Scott Johnston of Inception Holdings LLC with a corporate office near Orlando and a Tampa Division listing Apollo Beach as an office, is licking his chops, hoping to buy the Apollo Beach Golf Course from Penske. The proposal is to construct a large, stylish housing development and amenities in its place, replete with a smaller, executive golf course. The former golf course has been closed since Jan. 1, 2021, and will remain closed regardless of any rezoning hearing outcome, according to Tom Doozan, manager and, reportedly, a minority stakeholder. The golf course is now overgrown and herbicide applied, which makes it brown instead of green on the fairways, the putting “greens” and the tees. The clubhouse, bereft of customers, has fallen into disuse.

After several delays, Hillsborough County has set again a public hearing for Tuesday, May 11, at 9 a.m. at the Robert W. Saunders Sr. Public Library on 1505 N. Nebraska Ave. in Tampa. However, reliable sources have indicated that the developer is not prepared to seek the modified land use at this particular meeting and will probably ask for another delay, possibly until June or August. The hearing will be open to the public and available virtually on the Hillsborough County TV channel.

Faced with multiple options, Scott Johnston and his Inception developing team claim to have devised a solution allowing a modified, revamped golf course and clubhouse to remain open to the public in the future, along with adding value to the area by proposing the addition of a restaurant, yacht club and continuing care retirement community (CCRC), consisting of independent living cottages and multifamily units with assisted living-type services.

“This is the right product, in the right project, in the perfect place,” Johnston told news media. “Since the CCRC is not a traditional single-family residential community, future burdens on schools, parks or traffic have been minimized. The proposed density for this development was purposely kept underneath all existing thresholds to not bring further burden to the community.”

When and if the proposed project is a reality, the community will feature 265 detached independent living cottages as well as 130 assisted living units housed in six multifamily buildings.

The now-closed Apollo Beach Golf Club, designed by Robert Trent Jones and open since 1962, would be drastically transformed. Proposed changes to the current configuration of the golf course would see removing seven holes. After that, the remaining 11 holes will be renovated into an 18-hole, par-60 executive course. In addition to the smaller course, the proposed new owners would build a new clubhouse and a new amenity center. Also envisioned in Inception’s plan is a venue to host weddings, community and social events. No new water access will be added to Tampa Bay or other adjacent bodies of water.

Johnston and his Inception investors have their reasons for purchasing, developing and transforming the golf course in Apollo Beach: to make a profit.

Gary Canan has professional experience along these lines. Canan maintains, “In my opinion this proposed development is carpet bagging in its most egregious form.”

Canan maintains that over the years he has been on both sides of golf course “re-development” and rezoning, both as a proponent’s (owner/developer) project director and also as a concerned citizen.

He went on to say that one commonality in all cases of claimed full financial failure was the proponents’ making the case that such development was necessary, as the golf course they owned or had recently bought was no longer financially viable and, yet, rather than recouping the fair market value of the property or their investment as a golf course, sums of money greater than years of operating losses were often spent seeking zoning relief, rather than a buyer for the failed business.

“I know for certain that this Apollo Beach development has been planned and the golf course directed toward it for many, many years, even as far back as its purchase by the current owner.

“I am all for proper land use around courses as long as that use does not adversely affect the golf course or its benefit to the community. That does not seem to be the case with Apollo Beach,” said Canan of Brandon; he is also an avid golfer.

According to Canan, it seems clear the proponents (current owners and developers) want to use the existing course and, in doing so, disadvantage and disenfranchise hundreds of property owners and also Apollo Beach as a whole. Canan sees the Inception proposal as “singular enrichment at the expense of the County and community.”

“If the owners proposed the development of land available but historically unused by the course and such development would benefit the community, I would be their strongest proponent,” Canan observed.

Canan says this is almost universally why proponents (developers) claim financial failure, as it becomes an implicit threat to the community, “let us build or we will let the property decline and negatively affect your community anyway.”

He explains that this is why a proponent might use herbicide to defoliate a course to demonstrate to the community a precursor of things to come.

“In any case, any consideration of rezoning (or land use) that precedes a search for legitimate buyers who would commit to existing restrictions and reaffirm same in perpetuity, borders on malfeasance and is premature,” concluded Canan.

Stephen Jones is a retired federal employee and naval officer. He has lived in Apollo Beach about two years. “I oppose the proposed golf course development simply because I prefer to live near a golf course rather than near more houses and the associated traffic and congestion,” stated Jones.

Paul Ryan has lived in Apollo Beach for 38 years, 28 of those years near the 8th tee, with a view that’s highly desirable and sought-after. That delightful vista may be changing, but Ryan aims to slow down, stop or modify Inception’s plans. Ryan said, “I live on the Apollo Beach Golf Course and a developer wants to put homes on part of the course. Miller Mac Road and Golf & Sea Boulevard can’t handle all that traffic. There is also a lot of wildlife on the golf course. The course floods now when it rains. Where will all the water go?”

Ryan concluded with his plea for the County commission: “Please put a stop to all of this uncontrolled development.”

Fran Wilson, another Apollo Beach denizen on the unkempt fairway articulated her opposition to the razing and replacing of the course and re-development as a housing complex. Wilson also proposed a range of solutions for the over-development in Apollo Beach, and, indeed, all of South Shore.

“I am Fran Wilson. I oppose the redevelopment of the golf course for several reasons:

1. The effects of increased traffic on already congested roads: The County is approving all these housing developments all over Southern Hillsborough County without doing enough to improve or widen roads. We live on a cul-de-sac. There is one road in and out. This development would put the back-to-back developments on cul-de-sacs, with one road in and out to all three. It will create a bottleneck.

2. Flooding: There are already problems with flooding here in Apollo Beach. In heavy rains, some of the roads are impassable. There are only two roads to U.S. 41 from Golf & Sea Boulevard. If Miller Mac Road cannot be used, then Leisey Road is the only other road out. But on Leisey, across from Winn-Dixie, a housing development of 235 homes are going up at that corner. Also some 300 plus houses, which are part of the same development, are being constructed directly across U.S. 41.

3. Water and sewage: We are on water restrictions here in Southern Hillsborough County until at least December 2022. Thousands of houses are going up in this area. Why should those of us already here suffer for the County’s decisions?

4. Loss of recreational open space: Thousands of vehicles are being forced on the road to drive elsewhere to play golf. Why should another town put in a golf course when there is already one in place? This course was being utilized by golfers from Brandon, St. Petersburg, Palmetto and surrounding areas, not to mention golfers here to visit relatives and friends.

5. EMS, Fire and Rescue response: Apollo Beach does not even have its own ambulance. If you call EMS, a fire truck and its van respond. That is a waste of resources. You have six to eight people and two trucks responding to a call for a medical issue! With this increased construction and population, there will be more calls for first responders.

According to Wilson, all these factors she identifies have a detrimental effect on the Apollo Beach community. Wilson proposes that someone at the County level needs to oversee the whole development and zoning picture for Southern Hillsborough County.

She does not stop there. Additionally, she thinks the best solution would be for Roger Penske (principle owner of Apollo Beach Golf Club) to donate all or part of the property to the County to take over and maintain.

Still another more drastic alteration to the system and structure of government, feels Wilson, would help the current “mess” as she describes it. “Another option would be for Apollo Beach to incorporate and make its own decisions,” she offered.

And finally Wilson emphasizes that one more option would be to sell the property in question, possibly with the stipulation it is to remain a golf course. 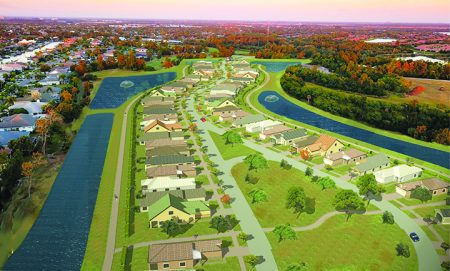