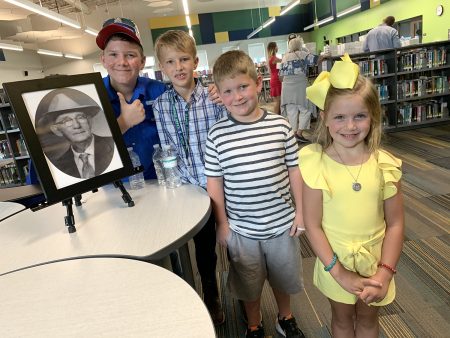 LINDA CHION KENNEY PHOTO
With a photo of Jule F. Sumner, in the media center of the school that bears his name, stand his great-great-grandchildren, from left, Luke Philmon, Joe Sumner III, Levi Philmon and Kayleigh Sumner. 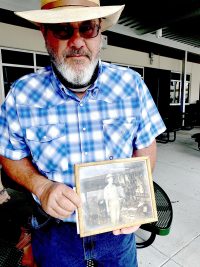 Standing in the state-of-the-art athletic field at Jule F. Sumner High School, Joseph Sumner III spoke about the gratitude his family has for naming a school in memory of his great-grandfather, a man who founded a cattle-raising business that more than 100 years later continues to operate down the road.

“I’ve been told before that a man is not dead until his name is no longer spoken, that we are only truly gone when we disappear from the memories of those who loved us,” Sumner said. “The naming of this school ensures to our family that Jule [and his wife] Emma will never be gone. I pray all the students who pass through these halls will inherit Jule and Emma’s grit and tenacity. We are blessed and honored to be here today.”

Indeed, if ever there was a test for “grit and tenacity” in these pandemic times, opening the largest school in the nation’s seventh-largest school district during the COVID-19 pandemic surely would fit the bill.

Leading the charge was inaugural principal Dave Brown, who in January turned the keys over to Sumner principal Robert “Rob” Nelson III, whose education career included a long-time stint as principal of Plant High.

As for Brown, after working at five high schools, including East Bay, Freedom, Leto and Strawberry Crest, Brown works now in the district office, as supervisor of social studies for grades 9 through 12.

“Thank you for being here at this once in a lifetime event, the dedication of this beautiful institution of learning,” Brown said, in his prepared remarks at the April 18 dedication ceremony. “It’s said that it takes a village to raise a child. But I’m here to tell you, it takes a metropolis to open a high school during a pandemic.”

Hillsborough school superintendent Addison Davis, who left a family funeral in Jacksonville to attend both Sumner’s dedication and the dedication later in the day for newly opened Belmont Elementary, called it a special moment for both the community and the Sumner family.

“The dedication,” Davis said, in an interview after his speech, “is just a further opportunity to celebrate and acknowledge the hard work that has been done so far and for the pioneer that Mr. Sumner was.

In his remarks, Brown gave a nod to his wife, who grew up less than two miles from the school, the child of a migrant worker. “She had very little in the way of luxuries growing up,” Brown said. “To her, like many migrant students, going to school was not only a way to change her life for the better, it was a second home. She reminded me daily how important this school was going to be to the children of some of the hardest-working families in the county. ‘This school will put all kids on an even playing field,’ she said, and like most wives, she was right.”

As the first school built in Hillsborough County in 11 years, the $75 million, two-story, multi-building, 238,268- square-foot campus opened for business in August at the border of Balm and Riverview, on the north side of Balm Road, east of U.S. 301.

Roughly three miles away is the Sumner Cattle Co., owned by Joe Sumner III and his wife, Nikki.

And while during times of “drought and fluctuating market prices many ranchers’ businesses did not survive,” the same was not true for Jule and Emma Sumner, their great-grandson said. “They dug in and weathered the storm.”

For these and other reason, Brown said the new school was aptly named.

“The name Sumner has been a staple in this community for more than a century,” Brown said. “The Sumner name has been respected in this community. Because of the Sumner family’s generosity for the past 100 years, the other local families in this community followed their lead. Since we opened our doors I want to say thanks to all the growers, farmers and ranchers who supported our school and, more importantly, the students who attend.” 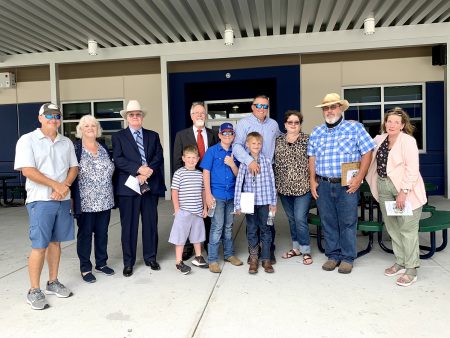 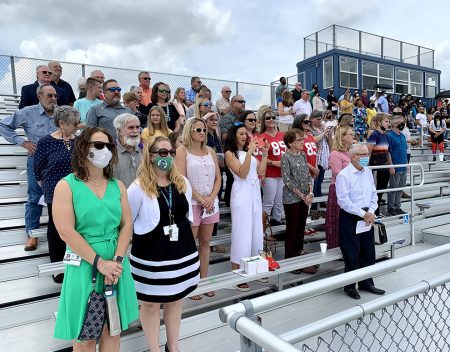 With masks on, attendees in bleacher seats stand for the national anthem at the April 18 dedication ceremony for Jule F. Sumner High School, which opened in August as Hillsborough County’s largest high school. This section includes teachers and Sumner family members. 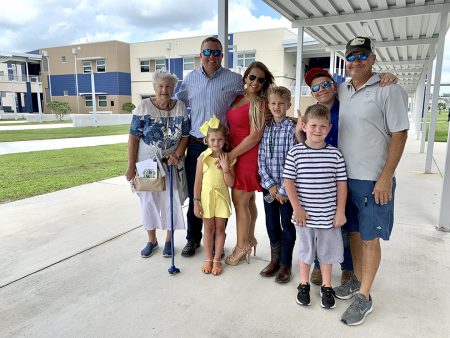 Joe Sumner III, with his wife, Nikki, owners of Sumner Land Management and Cattle Company, with their children Kayleigh Sumner and Joe Sumner IV, and their maternal grandmother, Eva Listro, left. With them, from right, are relatives Lance Philmon and his sons, Levi and Luke Philmon. 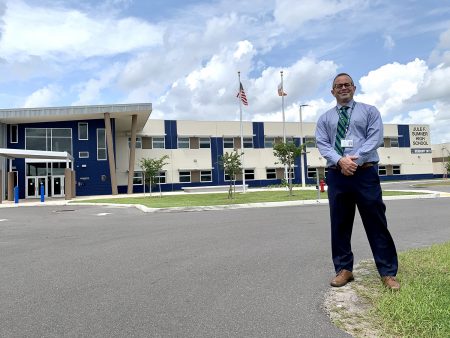 Jule F. Sumner High School Principal Robert Nelson III, who succeeded Dave Brown, who planned for and oversaw the opening of the school in August. Nelson succeeded Brown in January. 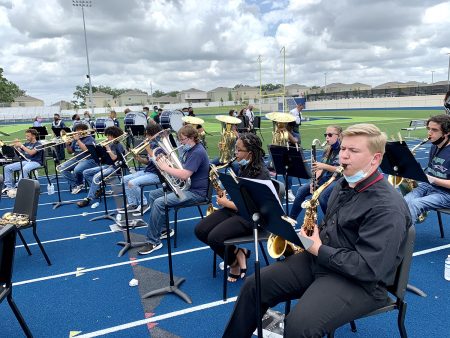 Only program speakers and band members, when playing their instruments, were without masks during the April 18 dedication ceremony for Jule F. Sumner High, which opened its doors in August as the COVID-19 pandemic continued to take root. 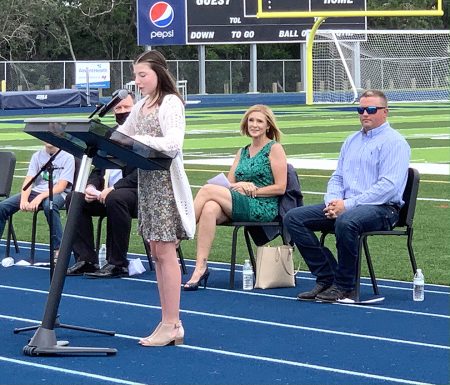 Sumner High student Emily Hooks reads from prepared remarks as she introduces Hillsborough County school board member Melissa Snively, seated in green behind Hooks. Next to Snively is Joe Sumner III, the great-grandson of the school’s namesake. 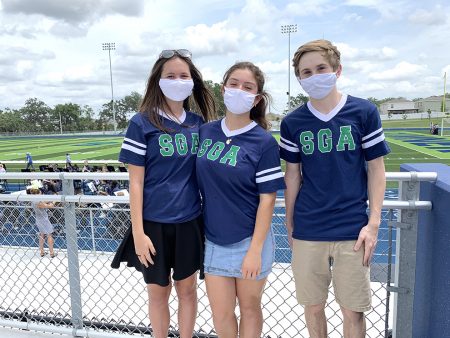 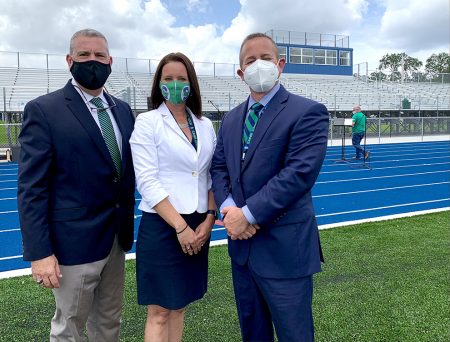 At the April 18 dedication ceremony for the school they opened, inaugural principal Dave Brown, left, and Deanna Fisher, inaugural assistant principal for curriculum. With them is Robert “Rob” Nelson III, who in January was named to succeed Brown, who had been a long-time principal of Plant High. 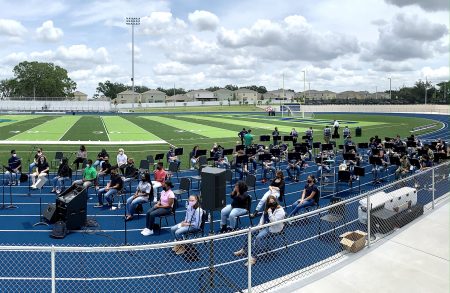 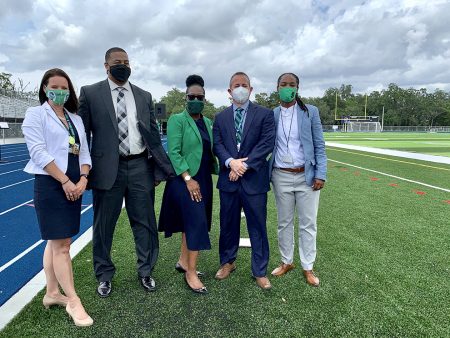 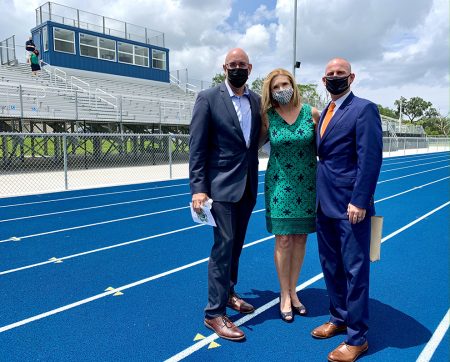 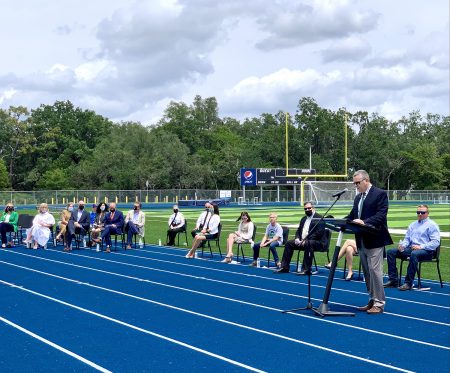 Dave Brown, the inaugural principal of Sumner High, speaks at the school’s April 18 dedication ceremony, where COVID-19 safe distancing protocols were in place for school officials and program speakers.