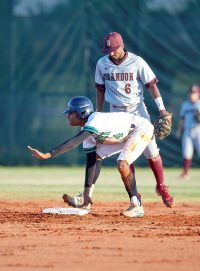 The East Bay Indians, under Coach Cody Crouse, have started, to no one’s surprise, another four-game winning streak going into the last week of the South Shore regular baseball season. This week the Indians have two more tough, competitive road games to end what has been a successful regular season. The well-tested Indians are 15-6 overall.

First up on April 20 was a visit to the Durant Cougars who, at 17-4 and 5-1 in the district, possess one of the county’s best pitchers in Zander Fisk. The Cougars are also riding a four-game winning skein. Durant is in 7A-D8 while East Bay is in 6A-D10, but both squads are expected to make some noise in the playoffs. Another competitive opponent awaits East Bay in Tampa for an April 22 regular-season finale: Plant, at 10-12 and 4-5 in 7A-D7.

East Bay took two games last week in impressive come-from-behind fashion to stretch its current winning streak to four. The latest victim was rival Newsome on April 15. Hot off the bus from Lithia, the Wolves exploded for three runs in the top of the first inning, but Indians’ relief pitchers Manny Dooley and Benjamin Bostic stopped the early bleeding right there. Meanwhile, the Indians put together two late inning rallies to notch the 5-3 win against Newsome. The early-week 5-2 win over Robinson was similar. The home-standing Knights scored single runs in the first and second innings. But Tanner Elizando relieved Andrew Pierce after the two shaky innings and pitched scoreless ball. The Indians scored two in the sixth inning and won it with three in the seventh. East Bay’s senior Hans Walker went three for four, with two RBIs and a run scored.

Spoto has three opportunities this week to gain its elusive second win of the season. Going into the final week of the regular season, Coach Mike Boyd’s Spartans stood at 1-16. Spoto travelled to Brandon Monday to face the Eagles, 9-12 overall and 6-2 in 5A-D8. The Spartans host the 5-17 Armwood Hawks April 21. Then the curtain comes down on the regular season as Lennard visits Spoto Friday, April 22.

Last week was another tough week for offensively-challenged Spoto. In early-week action, the Spartans came close but no cigar, dropping a 5-4 heartbreaker at home. King started like a house afire, crossing the plate three times in the top of the first. Spoto mounted a comeback attempt but fell one run short. Sean Weir stroked a hit and drove in a pair of Spartan runs. King committed four errors and all four Spartan runs were unearned. Spoto’s Chase Wink opened on the hill and coughed up the King runs. Frosh Peyton Nise took over and posted three scoreless innings. Against Jefferson April 15 it was a night of goose eggs on the scoreboard except for the bottom of the third when Jefferson erupted for a seven-run stanza, including a homer from Nathan Reta. Sean Weir and frosh Michael Walker managed Spoto’s only hits with one apiece. Senior Jonathan DiNova pitched well except for the disastrous third inning. For the season, Spoto has scored only 39 runs while opponents have crossed the plate 153 times.

Over at Boyette Road, Riverview split a pair last week. The Sharks worksheet stands at 11-10 overall and 3-3 in 7A-D8 action.

Coach Josh Smith continues to get good pitching from senior Kipp Kochera and soph Nate Hook. Add in soph Farah Castillo’s timely hitting and the Sharks are feeling good about post-season play once the regular season concludes this week. The two remaining regular season games are on the road. First, the Sharks visited Plant April 19. On Friday, the Sharks make another bus ride to Tampa to play Robinson to conclude the regular season.

Both Riverview games last week were in the nail-biter category. The bad news was the 3-2 loss to Sickles at Tampa, April 15. Farah Castillo lashed out two hits and an RBI, and the Sharks led 2-0 after three innings but then went cold offensively. The Sickles Gryphons scored a pair in the fourth and then got the winning run in the eighth. In the early-week game, the Sharks rewarded the fans on Parents Appreciation Night, taking a 2-1 squeaker over Lennard with a run in the bottom of the last inning. Senior Kipp Kochera threw a complete game, giving up only two hits. Castillo continued his clutch hitting with an RBI on a pair of safeties.

Lennard has been up and down all season but won two last week and has the opportunity to improve its worksheet this week. Coach Victor Martinez’ had his hands full with the Bloomingdale Bulls at the corral early week. But road games concluding the regular season are winnable. On April 21, the Longhorns visited Blake. The regular season finale against Spoto is April 22, prior to the start of post-season play in 7A-D8.

Coach Martinez received good pitching last week as Lennard posted a 2-1 mark. The early-week loss was to Riverview. The Horns could only muster two hits against the Sharks, wasting Horns’ pitcher Jack Mueller’s six inning performance in which Mueller gave up only one run on four hits. The Horns bounced back to win the next two. On April 16, two seniors, Jaylin Tose and John McCool, combined to shutout the hapless 1-13 Chamberlain Chiefs in Ruskin. Lennard utilized hits from eight different players with frosh Andrew Gingrich driving in four runs to coast to its 5-0 win. The next day against a more formidable opponent in Tampa, Lennard won a 4-3 see-saw battle over 13-8 Leto. The mound combo of frosh Zack Bird and soph Carter Payne held Leto scoreless through five innings. Both teams scored three in the sixth inning before Lennard pushed across the winning run in the seventh and final inning. Junior Sebastian Munoz went one for four with two RBIs and a run. Soph Alex Brazer was two for four at the plate with a run. Scoring two runs was Logan Covey.

Over on Balm Road upstart Sumner had Brandon on the ropes, 3-0, heading to the final inning. But that loud crash you heard Monday evening April 12, was the bottom dropping out over at the new Sumner diamond. Chasing the Eagles for a higher rung on the division ladder, the senior-less Stingrays were oh-so close to closing the deal and upsetting the 9-12 overall, 6-2 division Eagles. The visiting Eagles put together a humongous seven-run top of the seventh for an improbable 7-3 win over Coach Kennedy Duran and his heartbroken young team. The Stingrays went quietly in the bottom of the last stanza, learning a tough lesson… “It ain’t over until the fat lady sings!” Sumner top offensive performers all season, freshman Garrett Morgan and junior Joe Cabrales, went two for three and three for three, respectively, driving in all Sumner runs. Rays hurler Jayden Brown had gone six plus innings and racked up 10 whiffs. But it was not enough as the resilient Eagles celebrated the comeback victory. Later in the week, Sumner also fell to King, 5-1, in Tampa.

Licking their emotional wounds at 3-12 overall and 3-4 in district 5A-D8, the Stingrays are looking for better results in games this week to conclude the regular season. In an early week game Tuesday, Sumner visited 5-12 Middleton. The Stingrays own one win over the Tigers already, to go along with their other two rookie-season victories, both over Spoto. Sumner closes the regular season April 22 on its home diamond against 13-8 Leto. 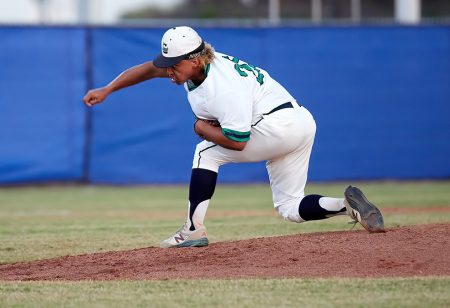 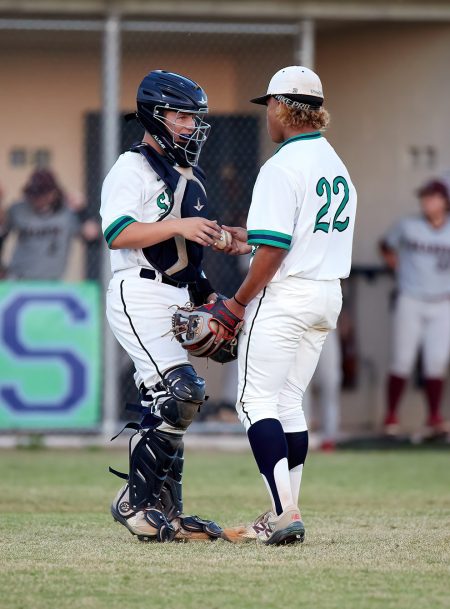 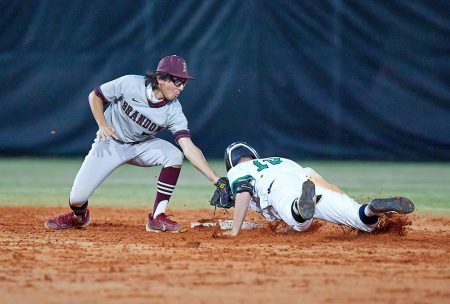 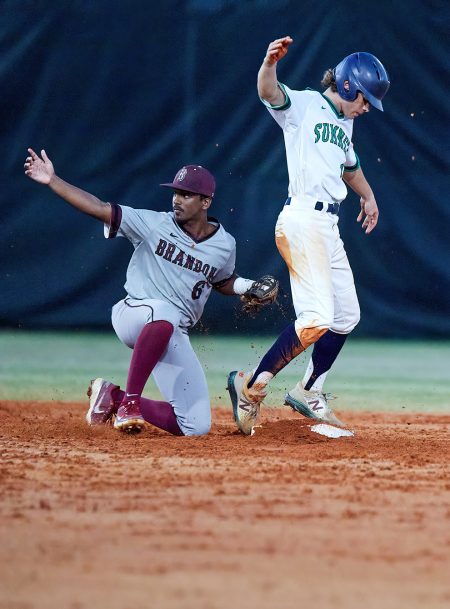 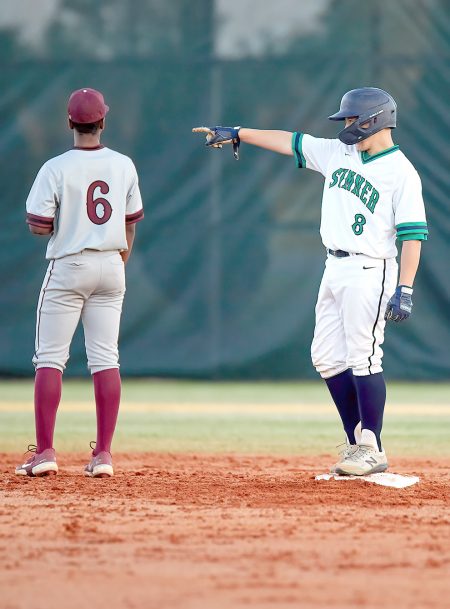 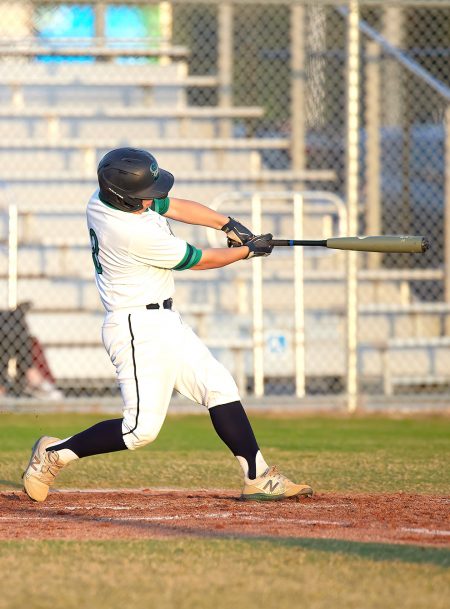