There’s something about fair food that says, “Drop the guardrails, go for it!” And just in time for the annual Florida State Fair, set to start its 12-day run Thursday, April 22, at the Florida State Fairgrounds in Tampa.

So much food, so little time and so many offerings promise to boost fat and cholesterol levels just thinking about them. Of course, that’s not how it works, but let’s delve deeper.

The Gelato Nachos from Funky Flamingo, the Deep Fried Caramel Apple Sundae from DeAnna’s Steak Sundaes, and the Farm Fresh Blueberry and Cream Doughnut from Peachey’s can wait a bit longer while we engage in this exercise.

We’ll start with the caveat that nothing in this column is an endorsement of any kind. The aim simply is to take a bite out of the “should I” or “shouldn’t I” conversations we have with ourselves before taking the first bite. To wit:

“It’s a special occasion, the fair comes only once a year!”

“I’ll eat just a little and save the rest for Uncle Joe.”

“You live only once, enjoy!”

Are you now ready to plunk down some change for Beer Cheese and Bacon Fries from Chestor’s Gators, The Deep Fried Molten Lava Cake from Carousel Foods or the Peanut Butter and Spicy Jelly Tater Tots from Swift Concessions Tots? 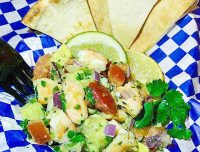 How about the Flaming Hot Cheetos Funnel Cake from The Best Around? This entails adding cornmeal, spices, fresh jalapenos and crushed flaming hot Cheetos to cake mix, poured through a funnel and fried, then topped with nacho cheese and (you guessed it) more Cheetos.

These treats (nay, temptations) grace the Florida State Fair menu, along with other baked, grilled and deep-fried selections served on or off a stick. That includes the PigRig from Low N Slow, which amounts to grilled cheese stuffed with barbeque pulled pork and mac-n-cheese, finished with a signature barbeque sauce.

Or you can try The Sticky Pig, new from Polar Bear, comprised of two Krispy Kreme doughnuts and homemade key lime hard ice cream, frozen, then dipped in chocolate and rolled in graham crackers.

Ready to break your diet/healthy eating rules? Before you do, consider a few notes gleaned from a very quick review of published reports.

Some studies say a “cheat” or “treat” day is not so bad, and maybe even good for your diet. Other studies show even a one-time dig into food high in both saturated fats and calories can have an immediate negative effect on your heart health.

So, if you do decide to throw caution to the wind, don’t go to the fair hungry. Eat normally up to admission, so you’re not “starved” before you get there and, therefore, likely to eat way too much of a good or bad thing, depending on your perspective.

In a similar vein, scout ahead for your top pick or two, so you don’t buy on impulse then find something you can’t do without further down the fairway lane. And eat slowly. Savor every bite so you’re inclined to eat less overall.

Enticing you to do otherwise are a slew of decadent-times-two desserts, including the Deep Fried Rainbow Cookie from Paul’s Concessions, the Italian Bombolini Sundae from Barbies Ice Cream, the Orange Glaze Funnel Cake from the Midway, the Candy Cop Sundae from The Best Around, and ice cream sandwiches from Polar Bear, featuring various flavor combinations.

Set to wash all this down are two featured drinks: Blue Raspberry Lemonade from Cinnamon Saloon, served in a fresh pineapple, and Funnel Cake Cider, crafted by Keel Farms Agrarian Ale + Cider and new this year in the Grove Craft Beer Garden.

As for bragging rights, that goes one of two ways.

The, “I found a way to eat healthy at the Florida State Fair” category might include your purchase of the Miami Seafood Salad, new from Atlantic Concessions. It’s billed as a Miami-inspired fresh shrimp salad topped with avocados and red onions, tossed with pita points in cilantro/lime citrus vinaigrette.

As for the category, “I put something in my mouth that questions my sanity,” we’ll note a menu item new from Angela’s Pizza. Starting with a white garlic sauce base, the Pickle Pizza comes topped with mozzarella cheese and dill pickles, garnished fresh from the oven with ranch and dill seasoning.

Then again, with all the other food items featured at the fair, dill-pickle pizza might seem rather tame.

For more on the Florida State Fair and its featured food-choice options, visit: www.FloridaStateFair.com. 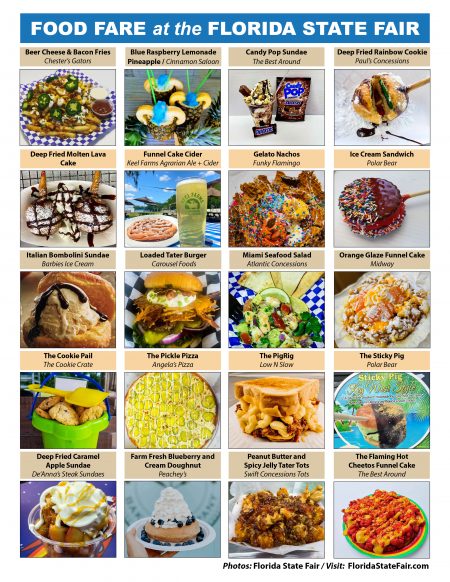