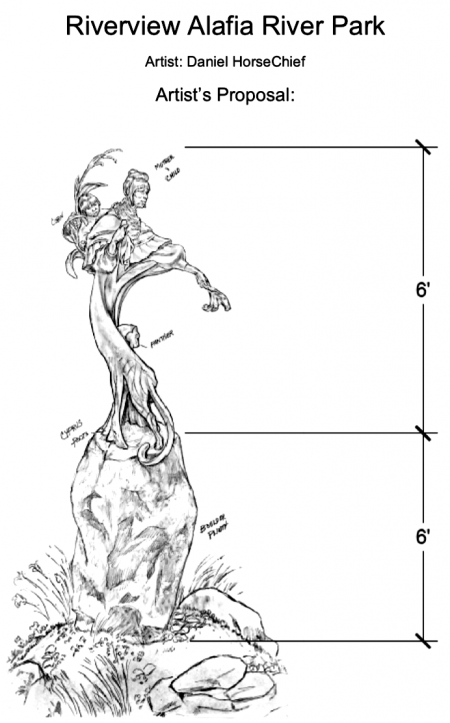 Hillsborough County commissioners have approved public artwork sculptures for two traffic roundabouts in Valrico and for the upcoming Alafia River Park off Riverview Drive, about 1 mile east of Interstate 75.

Approved at the April 7 board meeting for the Riverview park is Daniel HorseChief’s proposal for a 6-foot high bronze sculpture of a Seminole mother and child. Featuring a panther as well, the iconic exterior sculpture is to be mounted on a 6-foot high rock base inside the Riverview/Alafia River Park. Completion is slated for early 2022.

The anticipated cost for each of the three bronze sculptures is $75,000, with funds for the collective cost of $225,000 charged to the County’s Capital Improvement Program approved for fiscal years 2021-25.

The additional two sculptures approved at the April 7 meeting are for upcoming traffic roundabouts in Valrico.

One sculpture, submitted by artist Daniel Borup, features an 8-foot high rendition of the Goddess of Ceres, set to be mounted on a 6-foot base at the center of the roundabout at Durant/Little and Dover roads. Completion is expected in mid-2023.

The second sculpture, submitted by artist Gareth Curtiss, consists of a 6-foot high rendition of William G. Tousey, who in the 1880’s purchased property in the area. Credited as the founder of Valrico, Tousey at the time was a philosophy professor at Tufts College. After purchasing his Florida property, and after construction of railroad tracks nearby, Tousey reportedly set about to build up the community with retail stores, streets and a bank.

Curtiss’ sculpture, set to be mounted on an 8-foot high pedestal in the center of the proposed roundabout at Durant and Miller roads, is expected to be completed in later 2022.

The three sculptures addressed at the April 7 meeting follow approval by commissioners in 2019 to put three-dimensional public art in the center of upcoming traffic circles and roundabouts throughout the County.

Commissioners at their Aug. 7, 2019, meeting issued a call for artists to submit their designs for a sculpture of Riverview founder Benjamin Moody, for placement at a roundabout on Riverview Drive, near the upcoming Alafia River Park.

Likewise, a call for artwork inside the upcoming County-owned passive-use park was issued for a sculpture representing a person from the Native American community that settled along the mouth of the Alafia River.

That sculpture, now approved as a Seminole woman and her child, as a design proposal was short-listed by a site advisory committee comprised of members representing the community and the Seminole Tribe of Florida Ah-Tah-Thi-Ki Museum. The County’s Public Art Committee endorsed HorseChief’s top-ranked proposal.

Even before their action in August 2019, commissioners had embraced the idea of public art in roundabouts, led by the efforts of Commissioner Stacy White, who represents District 4.

In August of that year, they approved a call for artwork representative of a bicyclist at the intersection of Balm Boyette and Boyette roads, near the emerging Hawkstone master-planned community in Lithia. The West Bay development is one mile south of the bicycle motocross at Triple Creek BMX and about six and 12 miles, respectively, from Balm-Boyette Scrub Nature Preserve in Wimauma and Alafia River State Park in Lithia, both popular destinations for mountain-bike riders.

“This is when I first started thinking about the roundabout art concept, for that awkward triangle where Boyette and Balm Boyette roads come together, not far from Hobson Simmons Road,” said White in a 2019 interview.

White said his well-received proposal for the Hawkstone roundabout informed his decision to push for the County’s policy to put public art in the center of all upcoming County-owned traffic circles and roundabouts, which commissioners unanimously approved at their Aug. 7, 2019, meeting.

With rapid growth and urban encroachment “communities tend to merge into one another,” White said at the time. “I can pinpoint many examples in my district where you leave one community and don’t realize you’re entering into a new community. Public art is just one of many tools we have in our tool chest to create a sense of place.”