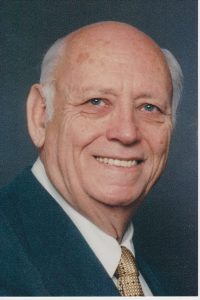 Donald J. Koester
Donald J. Koester, age 88, died peacefully at his home on April 2, 2021, surrounded by his loving children. He grew up in Alliance, Neb., and is preceded in death by his parents, Amos and Leah; his sister Kathlyn; his brother Robert; his beloved wife of nearly 57 years, Jane; and later, his new love, Kay. He is survived by his and Jane’s children: Stephen, Pamela and Mark, along with 11 grandchildren and 21 great-grandchildren, all of whom brought him tremendous joy.
Don is a graduate of the University of Nebraska in business and engineering. He followed his chosen work of industrial marketing, specializing in the civil fields of water and wastewater transfer and treatment equipment. His career took him through sales engineering, sales and service management and culminated in the formation of Koester Associates, Inc. He was active in and had leadership roles in organizations such as YMCA, Indian Guides and Boy Scouts as his sons were growing up.
Don and Jane retired in 1998 and came to the snowless south. They first built a retirement home on Lake Keowee in Seneca, S.C., and then moved to Sun City Center, Fla., in 2006. There, Don was active in the SSC Men’s Club and served on the board as manager of its Lifeline program as well as many other of the club’s service oriented activities.
Several years after his cherished wife’s passing in 2015, he unexpectedly met Kay Tscherfinger, and they fell in love. Kay’s daughter Ellen and grandson Brandon quickly became family to Don. He planned to propose to Kay, yet, sadly, she passed away six months after they began seriously dating. Don always said he was the luckiest man on earth to fall in love with two beautiful women in one lifetime.
His hobbies were golf, poker and bridge. He very much enjoyed being in the presence of both his devoted family and his treasured friends and neighbors.
Florida services will be held in Sun City Center at the United Methodist Church on Monday, May 10, at 11a.m. There will be a reception to follow at the church.
New York services will be held at the United Church of Fayetteville at 10 a.m. on Monday, June 28. Burial at the Fayetteville Cemetery will immediately follow. There will be a reception at The Craftsman Inn following the burial.
All services and receptions will be subject to COVID-19 restrictions and protocol.
In lieu of flowers, donations may be made to the Men’s Club of Sun City Center, 1002 Cherry Hills Drive, Sun City Center, FL 33753. Donations may also be sent to The United Methodist Church, 1210 Del Webb Blvd. West, Sun City Center, FL 33573. Arrangements by Sun City Center Funeral Home, 813-634-9900.