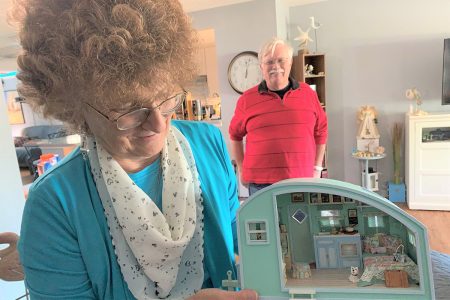 LOIS KINDLE PHOTOS
Sun City Center resident Elysa Hendricks shows off her miniature Happy Campers bedroom scene she made using a kit purchased on Amazon. Standing behind her and looking on is her husband, Vern, the director of programming for WSCQ Sun Radio 96.3 FM.

By LOIS KINDLE
Sun City Center resident Elysa Hendricks enjoys working with tiny objects. Her home is filled with miniature representations of everyday life: scenes of a pastry shop, farm stand, laundry room, garden shack, living room and the like.
“I just love little things and creating something I have total control over,” said Hendricks, 69. “I don’t drink; I don’t party; I don’t play golf. This is my addiction.”
She shares her addiction with fellow members of the Dollhouse Miniatures Club, which meets Monday afternoons from 1 to 3 p.m. in the Bunker Room at the Sun City Center Community Association Arts & Crafts Building, 915 Cherry Hills Drive. Usually four or five of the 10 club members work on special projects like an Easter decoration for the home or a personal project of their own.
She joined the club, which is open to all residents of the Sun City Center Community Association or Kings Point Gold Card members, in 2018.
She said she began working with miniatures in the 1970s but stopped for more than 20 years when her two sons “came along.” Her interests subsequently turned to doing other kinds of crafts and writing romance novels until she and her husband, Vern, moved from Ohio to Florida in 2013. Her published titles include Must Love Cats, The Baby Race, Dark Star Dawning and others. For more information on them, visit www.elysahendricks.com.
For the past several years, however, she’s been back to miniatures. Some of the scenes she creates on her own, and some start with kits bought online through sites like Amazon or at Hobby Lobby. She makes many, but not all, of the tiny objects that are included in the final product.
“I especially like making scenes inside of containers that directly represent their themes, like a laundry room inside a detergent bottle, a bakery inside of a bread box or a coffee shop inside a carafe,” Hendricks said. “Next, I want to create a music room or music shop inside a (nonworking) guitar.”
Hendricks works her magic in a bedroom converted into a workshop in the home she shares with her dog, Panda; cat, Angel; and husband, Vern, the director of programming for WSCQ Sun Radio 96.3 FM. Married for 49 years this May, the couple co-host the station’s Morning Show every Thursday.
For information on the Dollhouse Miniatures Club, contact Hendricks at elysa@juno.com or Janet Dittmar, club president, at jandit912@gmail.com/. You can also call 813-634-1038.

This reading room scene was created by Elysa Hendricks, using a plan she found online and filled it with objects she made herself. 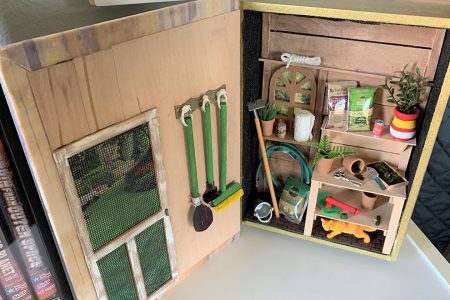 This miniature is a garden shed created inside a book box. Hendricks made most of the tiny objects inside. 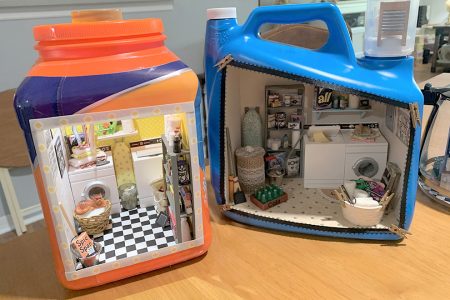 These laundry rooms made by Elysa Hendricks were created using detergent bottles. She said she next wants to create a music room or music shop inside an old, nonworking guitar. 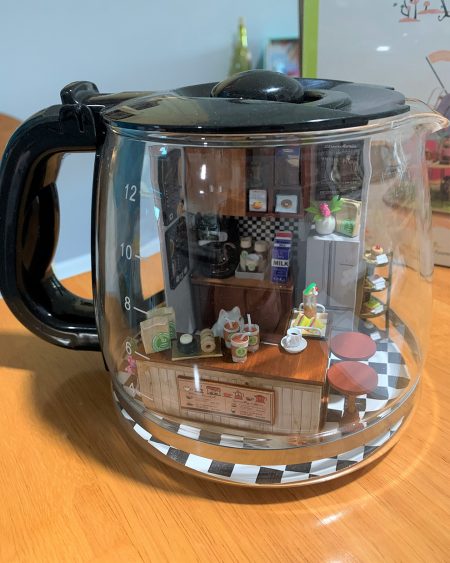 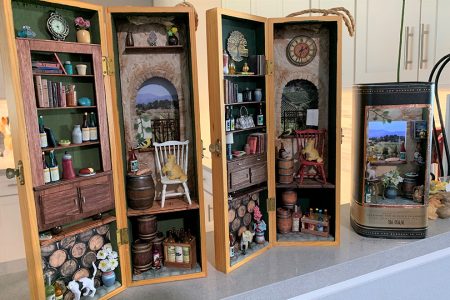 These are Elysa Hendricks’ latest miniature creations using wine boxes to encase the tiny objects inside. 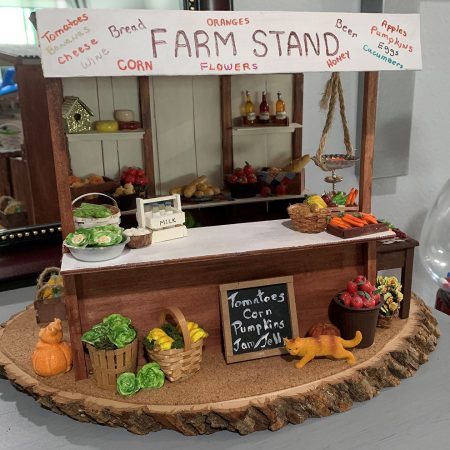 LOIS KINDLE PHOTOS
This tiny farm stand, made by Elysa Hendricks, is one of a number of miniatures greeting visitors who enter her home in Sun City Center. 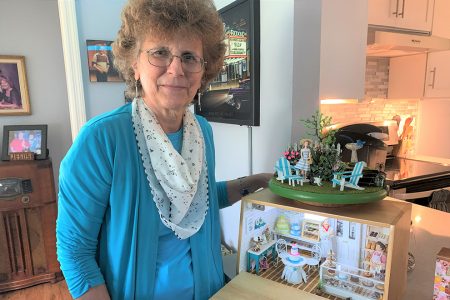 Elysa Hendricks shows two miniature scenes she created on her own, a bakery inside of a breadbox and a backyard garden on a lazy susan. Hendricks joined the SCC Miniature Dollhouse Club in 2018.