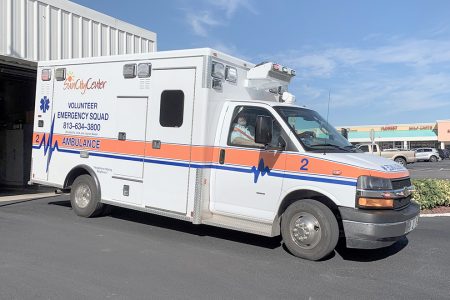 ROBIN WATT PHOTO
If you’d like to do meaningful volunteer work on behalf of area seniors, come to the next Pay It Forward event at 6 p.m., April 14, at the Sun City Center Emergency Squad Training Center, 124 Pebble Beach Blvd. S. Training and uniforms are provided.

By LOIS KINDLE
Typically when we think of paying it forward, it involves someone’s buying something for the person coming after us in line. However, those who are involved with the SCC Emergency Squad are providing a valuable service to the entire community through helping others.
There are two ways the emergency squad is able to function. One is through monetary donations, and the Sun City Center community has been very generous in that regard over the years. Its financial support has ensured the squad is able to keep up with technology and provide residents with the best possible care.
The second way is by volunteering, and these days there is always a shortage of help to serve such a large community. The squad is open 24/7, 365 days a year, so the need for additional volunteers is ongoing.
Whenever there’s a shortage of ambulance staffing, for instance, current volunteers are asked to work extra shifts. Without enough help, ambulances end up sitting idle.
Most of the squad’s volunteers are retired, although there are a few younger folks who volunteer. The minimum age is 18.
Emergency medical technician Emily Lahti, 79, has been on an ambulance crew for 22 years and served on the Emergency Squad Board for nine.
“I was one of the younger ones when I started,” she said. “Now I’m one of the older ones.”
Lahti said she primarily got involved when she first moved to Sun City Center and saw a sign that read, “We need you!
“I wanted to do some kind of meaningful volunteer work,” she said. “I had no medical background, whatsoever.”
But she and her husband Jim signed up anyway, and they received all the training they needed from the squad.
“What I found out was that the people on the squad are very giving, warm individuals who are more than willing to help others,” Lahti added. “Some of my best friends have come out of the squad.”
Lahti said she realized the training she received over the years not only helped the community, but it could also benefit her neighbors and family members.
“I do this because I love it,” she continued. “I don’t know what I’ll do when I can’t do this anymore.”
Kelly Knigge, 36, is one of the Emergency squad’s younger volunteers. He’s an EMT, driver, instructor and board member. Like Lahti, he finds great satisfaction in volunteering.
“There is little more enjoyment in life than doing something for someone else, especially during their worst moments in life,” he said. “I have done EMS in both a paid career and as a volunteer. Volunteering with the squad has added to my desire to help others by being an EMT.
“One of the values I live by is “selfless service,” which I had personally ingrained into me as a medic in the Army. By volunteering at the squad, I’m able to continue living this value by helping others.
“Most of our volunteers have had little to no medical experience throughout their careers,” Knigge said. “It’s amazing to be around people who are like-minded and trying to make a difference in their own lives, as well as the lives of those in the community we serve.”
You don’t have to live in Sun City Center to volunteer. All training and uniforms are provided.
The next Pay It Forward event is 6 p.m. April 14 at the squad’s training center, 124 Pebble Beach Blvd. S.