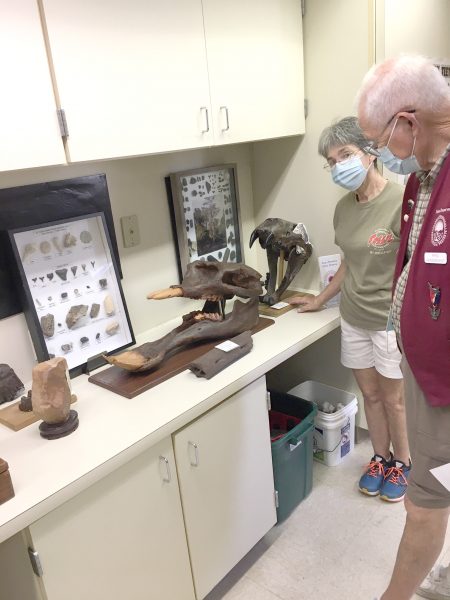 New additions to Paleo Preserve Museum were welcomed by Fred Hendershot, foreground, the field trip director, and Patty Moore, background, the director of the Paleo. The new items were purchased thanks to a gift from Earnest Marshall’s estate. The replicas, above, include, a Gomophothere skull (a shovel-tusked elephant), and an American Lion skull (20% larger than an African lion). Paleo also purchased rare fossils called Stromatolites, using the Marshall estate gift.

By STEPHEN FLANAGAN JACKSON
The Smithsonian it’s not! The Natural Museum of New York City it’s not!
But the Paleo Preserve Fossil Museum in the outskirts of Ruskin offers a close-up look at some of the same, and some “new,” pre-historic animal bones and skeletons as these two more famous museums in the big cities. And this amazing exhibit and collection of bones and other fossils is unique because not only is it in the South Shore’s own backyard, but the museum at the Paleontological Educational Preserve holds a special spot in the study of paleontology. This small, simple museum opens a window on the amazing, varied, extinct creatures that roamed this area of Florida in the early ice age, some 1.7 to 1.4 million years ago.

The Paleo Preserve exists thanks to the persistent digging and excavations of a Tampa Bay paleontologist nearly 40 years ago. In 1983 Frank Garcia uncovered the world’s greatest deposit of Pleistocene fossils at what is now referred to as the Leisey Shell Pit off of Gulf City Road just south of Ruskin. Garcia alerted the Florida Museum of Natural History, and scientific history was changed with his discovery.

When excavation ended, Garcia wisely started the Paleontological Preserve to share this amazing discovery with the public. Volunteers continue to build on Garcia’s work since he departed for other professional adventures in the Dakotas. Pictures, old newspaper articles and, most important, actual fossils and replicas bring this pre-history epic of Florida alive for visitors.

Where the Tamiami Trail or a Dollar General or a car repair shop or a housing development is today, strange and exotic animals, such as saber tooth cats, mastodons and giant sloths tread this same loamy soil and scrub pine almost 2 million years ago. The Paleo Preserve Fossil Museum is located inside two small hardiboard buildings on the Camp Bayou Nature Preserve, a few hundred yards north of the Little Manatee River in the middle of nowhere at 4140 24th St. SE in Ruskin. The museum is open for free to the public Saturdays from 9 am to 2 pm.

On a recent Spring Saturday visit to the non-profit museum, two directors, Patty Moore and Fred Hendershot, shared updates and post-covid plans for the Paleo Preserve.

According to Moore, the Mosaic Company just announced a grant that allows for more museum acquisitions. Moore points out that even though the post-covid future is uncertain, Paleo decided to push forward with acquiring more specimens because “seeing is better than telling.”

Moore emphasizes that some of Paleo’s exciting new purchases are a gomphothere, an American Lion, and stromatolites, which show the earliest fossil evidence of life. 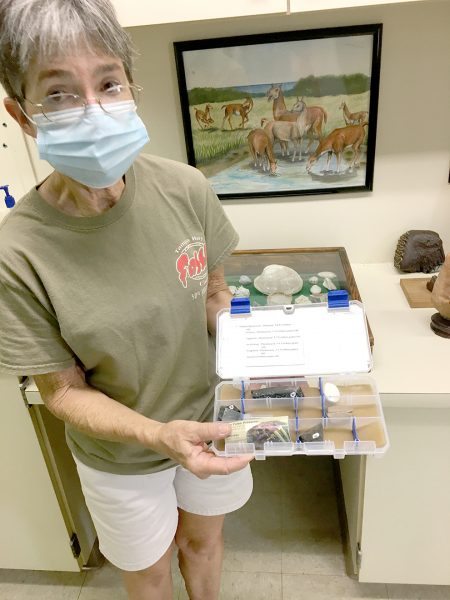 New additions to Paleo Preserve Museum were welcomed by Fred Hendershot, foreground, the field trip director, and Patty Moore, background, the director of the Paleo. The new items were purchased thanks to a gift from Earnest Marshall’s estate. The replicas, above, include, a Gomophothere skull (a shovel-tusked elephant), and an American Lion skull (20% larger than an African lion). Paleo also purchased rare fossils called Stromatolites, using the Marshall estate gift.

The Paleo is also launching an Eagle Scout project. When Paleo hosts groups for field trips, they often utilize the tables to spread out their fossils for identification. Years of Florida weather had damaged the tables, so when a Boy Scout needed an Eagle Scout project, he chose to help by renovating the tables. “Paleo looks forward to having refurbished tables thanks to the Eagles Scouts!” exclaimed Moore proudly.

Moore also acknowledge the role that volunteers continue to play for the museum. “Thanks to volunteer efforts, Paleo gained an updated website, re-started Facebook postings, and we have gained additional Saturday museum docents and carpentry assistance.

“It’s wonderful to have an influx of new help, and we welcome the opportunity for more volunteers so we could possibly be open on Thursday and Friday along with Saturday,” adds Moore.

In summary, the past year (March 2020-present) has been an exercise in adapting for the Paleo Preserve. Paleo’s last “normal” field trip was March 6, 2020. Three large field trips for May 2020 were canceled and the museum was closed to the public. Limited museum visitation resumed in June 2020, and Paleo welcomed back a school field trip on Oct. 29, 2020.

“Recently we’ve been able to resume our normal Saturday hours of 9 a.m. until 2 p.m.,” said Moore.

“Paleo looks forward to sharing amazing Florida fossil history with visitors. The museum also welcomes volunteers who would like to learn about fossils and share their knowledge with visitors,” concluded Moore. For more information, email  info@paleopreserve.com.

Proactive retirement leads Rotarian couple to ‘service above self’