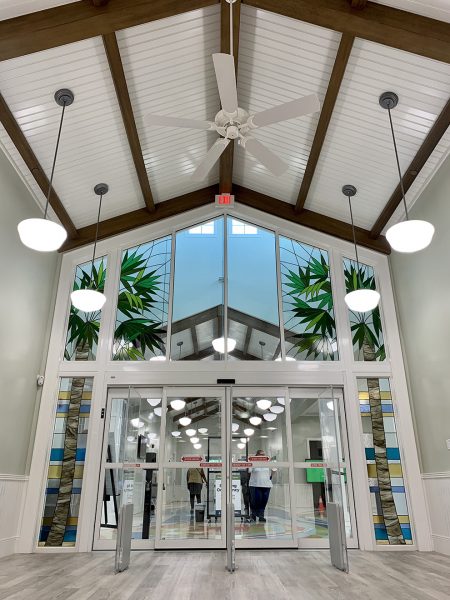 LINDA CHION KENNEY PHOTO
Leaving the main reading room into the main lobby, one sees a view of the stained-glass palm trees that furthers the appeal of the library built in the “Old Florida Grandeur style.” The $12.6 million library drew inspiration from vintage Florida postcards, reflecting a 1940’s coastal vibe.

By LINDA CHION KENNEY
With the go-ahead to open roughly seven months after its planned debut, the replacement Riverview Public Library opened its doors to the public for the first time April 5.
“The community’s been waiting a long time for this library, a long time,” said Riverview Branch Manager Karen Slaton. “I hope that they find it worth the wait.”
Indeed, enthused first-day visitors had nothing but praise for the $12.6 million library, designed in the “Old Florida Grandeur” style. Drawing inspiration from vintage Florida postcards, the 35,000-square-foot building brings to mind a 1940’s casual vibe, replete with shiplap wainscoting, bead board, ceiling fans and a covered, screened-in reading porch.
Great pains were taken to include art that tells the story of Florida life in Riverview, including stained-glass windows depicting river life, homesteading, palm trees and oranges, and a terrazzo floor depicting a flowing river from a “River of Fire.”
“I’m thrilled,” said Gretchen Delsavio, a member of the Riverview Friends of the Library volunteer support group. “I’ve lived here for 15 years and joined the friends in 2012. I’ve been advocating for this library since then.”
Signs of the ongoing pandemic were everywhere, from the floor stickers reminding folks to keep a safe distance to the wrapped furniture not yet ready to serve its purposes. A kiosk of laptops that can be rented for use on the premises also was under wraps until pandemic protocols are lifted.
Doors were closed to the covered screened-in porch, study and meeting rooms, recording studio and the 150-seat community room. The café, named for the Mosaic Company, and project rooms for adults and children have pandemic-delayed openings as well.
Capacity for now is limited to 58 people overall, and to 14 people at one time in the children’s room. As part of the Tampa-Hillsborough County public library system, the Riverview Public Library offers options for online access and for putting books on hold for curbside pickup.
As for the building itself, no one could deny the statement it makes as a testament to the unbridled growth of its namesake town.
“People who come in look in awe of this magnificent building, because we have definitely moved up from the tiny little library that served the community well for nearly 40 years,” Slaton said. “There was a lot of nostalgia for that building, but there came a time when the building and the library were too small to serve the community.”
Located at 9951 Balm Riverview Road, the 35,000-square-foot library replaces the original 8,000-square-foot Riverview library, which opened in 1979 at 10509 Riverview Drive on land owned by Cargill, Inc. The agribusiness spun off its stake in the Mosaic Company in 2011.
In keeping with its roots, the new library tips its hat to Mosaic with the naming of the café and the community room, which is known as the 150-seat James B. “Jim” Johnson Community Room. It features two screens with Wi-Fi connected LED projectors and two hard-wired podiums.
Johnson is well-known in south Hillsborough County and beyond, having attended Ruskin Elementary and East Bay High and having worked in the area for 43 years. He retired from Mosaic in 2015 as public affairs coordinator and is a board emeritus member of the Greater Riverview Chamber of Commerce. Among many other things, he served on the library board as an appointee of the Hillsborough County Board of County Commissioners, as honorary mayor of both Gibsonton and Riverview and for 13 years as chief of the Riverview Volunteer Fire Department.
“Jim Johnson worked so hard to get this library,” Slaton said. “He was very instrumental in getting it here.”
Also backing the library in a grand way are the volunteer members of the Riverview Friends of the Library, who showed up in force for the April 5 grand opening. A room in the lobby is set aside for their bookstore, which raises funds for library programs.
Also on hand for the grand opening were residents in attendance with or on behalf of their children. Count among them Robert Lendenmann, who prefers library browsing to online ordering.
“In my opinion it makes it easier than looking through books online,” Lendenmann said. Moreover, using library resources “saves me a lot of money because my 16-year-old daughter loves paper copies of books.”
Patience Converse said she takes her three daughters to the library every other week. They range in age from 3 months to 8 years.
“I like to eliminate some of the tablet and Internet time they have and get them to appreciate an actual hard-copy book,” Converse said. “Kids are being exposed to too much way too soon. It’s very nice to go off the grid.”
A fan of reading since childhood, Converse said she didn’t grow up with cable and would find herself bored at times.
“My mother would say, ‘Well, read. Let your imagination take you outside of the home,’” Converse said. “I developed a love of reading that I shared with my kids, and now they’re in love with reading. They love books.”
For more on the Riverview library, visit www.hcplc.org or call 813-273-3652. Hours of operation, subject to change, are 10 a.m. to 6 p.m. Monday through Saturday. 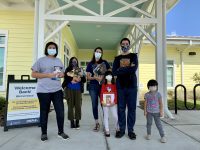 Among the first-ever visitors to the replacement Riverview Public Library, on its grand opening April 5, are Beth Dang and her children, from left, Faustina, Dymphna, Isidora, Francis and Alena. Living nearby, Dang said the family was “super excited” to learn of the replacement library. “We’ve been looking forward to this for a long time,” she said. 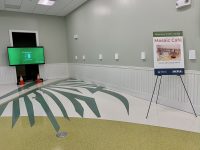 Site of the Mosaic Café is set to open in the replacement Riverview Public Library once COVID-19 protocols are lifted. The sign offers a view of the upcoming furniture, including live-edge tables with USB charging stations. Also when protocols are lifted, library goers can sign out a laptop computer for use in the library. The room behind the large screen is set to contain food and drink vending machines. 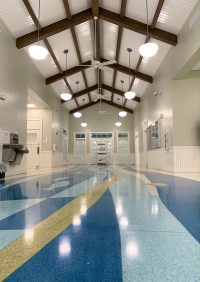 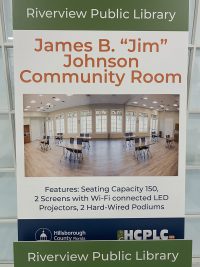 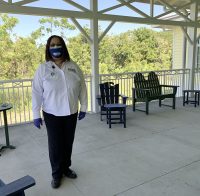 Karen Slaton, branch manager of the Riverview Public Library, shows off the reading porch that will open once pandemic protocols are lifted. The screened-in area overlooks “cattails, a little bit of oak trees and watershed with overgrowth,” said Sean McGarvey, the library system’s division manager for support services, in an interview late last year. The roof painted a light blue is designed to keep wasps and hornets from building their nests there, he added, “because they think it’s the sky.” 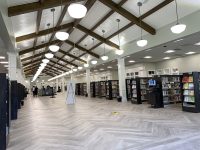 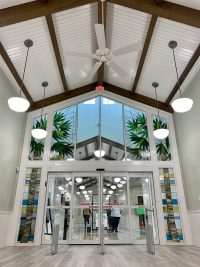 LINDA CHION KENNEY PHOTO
Leaving the main reading room into the main lobby, one sees a view of the stained-glass palm trees that furthers the appeal of the library built in the “Old Florida Grandeur style.” The $12.6 million library drew inspiration from vintage Florida postcards, reflecting a 1940’s coastal vibe. 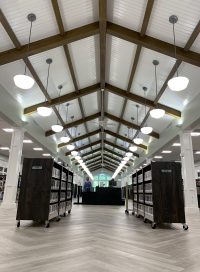 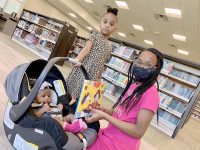 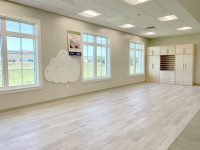 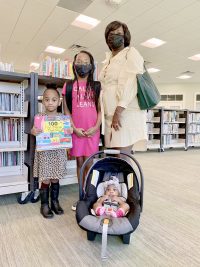 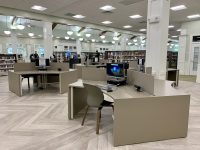 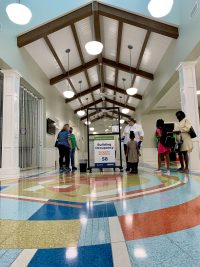 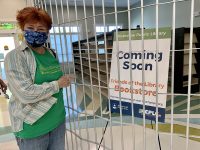 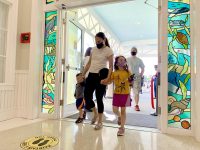 The first public visitors to the replacement Riverview Public Library stepped through the main doorway, April 5. Hayde Rodriguez entered with her children, Max and Ivanna, followed by Robert Lendenmann. Stained-glass windows are featured throughout the library, with the entranceway giving a view of manatees and other sea life. 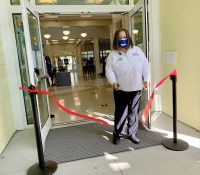 An impromptu ribbon-cutting, the handiwork of the Riverview Friends of the Library volunteer group, was a well-received surprise for Karen Slaton, Riverview branch manager, on the occasion of the replacement library’s April 5 grand opening. 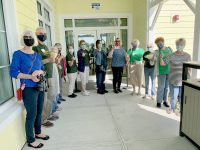