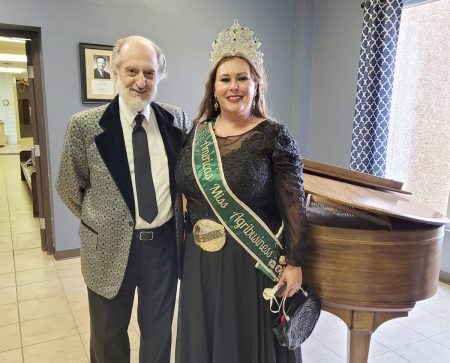 Robert Moffa, a local concert pianist and composer is pictured with Sondra Lundquist, of Wimauma, recently crowned America’s Miss Agribusiness, at the National Ag Day in Kansas last week. They both represented the South Shore area.

Robert Moffa, a South Shore musician/altruistic director, travelled to Kansas last week for a déjà vu piano performance of his new musical composition at the National Agriculture Hall of Fame.

Moffa, who has resided in the Ruskin-Sun City Center area since 1976, had the honor and pleasure of debuting and unveiling his new composition on a grand piano in Bonner Springs, Kans., as part of National Ag Day, which recognizes the dedication and contributions of America’s farmers, growers and ranchers.

The founder and executive director of the American Ideals Foundation, a non-profit charity organization based in the South Shore, Moffa explained that the AIF serves as a “Bridge to Humanity,” providing assistance, training and support in Hillsborough County as well as all over Florida and the world. The AIF helps communities, individuals, veterans, first responders, children and families. 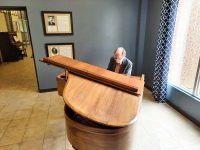 Robert Moffa, above, presented his new composition dedicated to US farmers last week at the National Agriculture Hall of Fame in Bonner Springs, KS. Moffa’s concert is available at AgHallofFame.com.

Moffa originally composed his signature composition “Harvest Overture” and played it with the Kansas City Symphony in 1986. That occasion, some 35 years ago, was the dedication of the National Agriculture Center and Hall of Fame. This recent event last week provided Moffa the opportunity to unveil and to donate another original composition: “The Bridge to Humanity — Our Farmer.” Moffa is also noted for his panoply of musical compositions, such as the Berlin Wall Suite, Poland Today, I Am A Farmer and others that recognize humanity

American Ideals Foundation, the AIF, is the brainchild of Moffa, a musician of special works who specializes in writing romantic, contemporary music for life legacies, humanity, historical works and special world and local events.

Inspired by his passion for the pursuit and protection of liberty since the early 1960s, Moffa established AIF in 1982 to recognize and honor visionaries, philanthropists, pioneers and social problem-solvers who have changed the way America supports its less fortunate and its national defenders: military members and first responders.

According to Moffa, the AIF serves as a nonprofit, liberty-spirited, arts-in-action organization that honors the principles of hard work, dedication to duty, love of country and love of family.

Moffa points out that the AIF has created community arts councils to ensure cultural development. He said all such events are free to the public and include a variety of artistic productions, such as music, paintings, poetry, dance, theater and sculpture. These foundation events provide entertainment and fundraising events.

The AIF, according to Moffa, is comprised of several divisions, each with a specific target beneficiary group and each with different service programs. The one common thread, said Moffa, is that they all have a positive impact on the lives of the individuals served and on humanity. In fact, Moffa likes to refer to the various programs as the Bridge to Humanity, followed by a phrase specifying the particular program, such as Housing/Job Training or the Medical Arts or the Power of the Arts or Our Children or Our Farmers or Our Military Heroes.

Moffa sums up, saying, “The American Ideals Foundation has consistently preserved and honored the American ideals of freedom and expressed mankind’s quest for the life that liberty offers.”

For more information on AIF, contact 813-416-8456 or go to FoundationofAmerican
Ideals.org/.