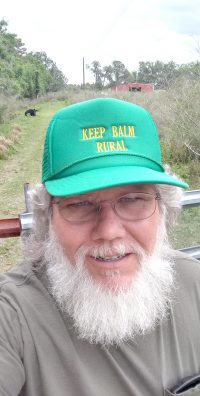 PROVIDED PHOTO
Balm Civic Association member Buddy Harwell sports his Keep Balm Rural cap, which is the group’s motto as they fight to slow down or stop the sprawl that has eyes on Balm.

Hillsborough County and the Balm Civic Association are pleased with a judge’s unexpected but welcome ruling March 9 against five giant land developers. But Balm residents realize they are in for a long, expensive battle to preserve the once-open, and rapidly-disappearing, spaces of this southeastern niche of the County.

Declaring the Hillsborough County Commission (and the Balm Civic Association) has legitimate public interests, circuit judge James Barton denied the five development petitioners’ request to amend their re-zoning application and threw a few unexpected curve balls to the land developers in the process.

The developers were hoping their requests for modifications of its Grove planned village in the heart of Balm for residential and commercial purposes would breeze through without any legal setbacks. Now, the developers have the option of appealing the ruling to the Florida Supreme Court or complying with County and BCA restrictions concerning their proposed developments.

Not only did the Florida 13th Judicial Circuit Civil Court deny the developers petition to modify its rezoning application, the court said it is within the legitimate interests of counties and residents “to control urban sprawl.” The court acknowledged an inherent right “to the maintenance of a rural lifestyle without the expectation of future urbanization.”

The five developers are proposing a “suburban dream scenario” in the form of residential and commercial construction and growth in the Balm area. Also targeted are over 4,000 nearby acres of pasture and farmland, a mega-development, which would eventually drastically change the rural nature of Balm, already rapidly disappearing. The losing petitioners on the writ of certiorari Circuit Civil Case No.: 19-CA-12782 are listed as developers: Balm Road Investment, LLC; Cassidy Holdings, LLC; Ballen Investment, LLC; Highway 301 Investors, LLC; and Mcgrady Road Investment, LLC.

These developers are the “Goliaths” in this battle with many of the Balm residents and others opposed to hyper-development, the “Davids,” who seek to stem the tide against the overwhelming cadre of high-priced attorneys and the battalions of indiscriminate bulldozers.

According to a Balm Civic Association member Buddy Harwell, multiple residents of Balm “moved out to this rural area to have space, to have something more than concrete, asphalt and (city) lights.” However, the years of Balm being “a small, quaint, rural little town” with “peace and quiet” and “open spaces”since its founding in 1905 are long gone.

Harwell acknowledges that, like many of the approximate 1,500 Balm residents, he moved to the area east of Hwy 301 to avoid city life 17 years ago.

“ I moved to this rural area to get away from traffic issues and housing developments, but unfortunately these things followed me,”Harwell said.

Harwell is a board member of the Balm Civic Association, a group that has been fighting for responsible growth in the area.

“Hopefully, with this case we can mould the rest of Southeast Hillsborough County and slow them down,” added Harwell. We would like to slow the growth and get the roads, fire stations and sheriff sub-stations built or fixed before the development proceeds.”

Hillsborough County has previously commissioned a report to review residential property rules, but Michael Fabbro, the president of the Balm Civic Association, told the media the County’s proposed plan for growth is insufficient and not in keeping with the recent explosion of growth in Hillsborough County.

“We have gross development advancing but nothing on infrastructure,” said Fabbro. “We don’t agree whatsover over with what they (the County) consider meeting the comprehensive plan.”

Fabbro says developers have gotten around that plan by making slight changes to the original plan that was denied.

“We continually deal with developers asking for four to six houses per acre,” points out Fabbro.

Hillsborough County’s moratorium on rezoning remains in effect and could be extended until the end of the year.

A public hearing on the matter is set for April, and a final vote is expected in May.