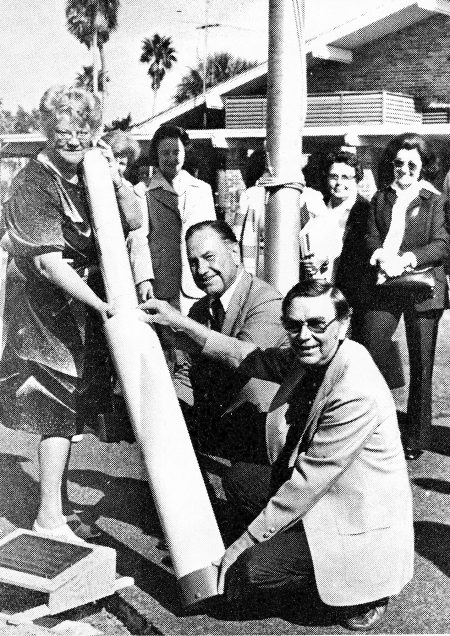 This newspaper photo from January 13, 1977, shows members of the SCC Bicentennial Committee with a sealed capsule containing memorabilia being placed at the foot of the flagpole at Town Hall.

Tidbits from the Vault

The archive of the History Society is full of interesting articles on important events of the past 57 years.There are also many items that may have little historical value, but, none the less, draw your attention.

When Clifford Beaumont and his wife moved to Sun City Center in 1967, Mr. Beaumont decided that he could improve on the green wooden borders the developer had installed around flower gardens in the community. Using his background in masonry, he decided to replace the green boards with what he called “popcorn.” He mixed up mortar and formed it into borders around the flower beds in his yard, painting them white. Later Bob Wheeler of Wheeler’s Nursery used this technique in landscaping homes around the community. This landscape feature soon became the norm. This information was found in the book, A History of Sun City Center, by John Bowker.

Two time capsules are mentioned in archived articles. A picture in an unidentified local paper, dated January 13, 1977, shows members of the SCC Bicentennial Committee with a sealed capsule containing memorabilia being placed at the foot of the flagpole at Town Hall. The contents are not to be removed from the capsule until the Tricentennial in the year 2076. A photo in The Observer News of August 1, 1990, shows a flag located near Barnett Bank. The ball at the top of the pole contained a time capsule.

A piece appearing in a collection of articles assembled by Phil Lange, an active Sun City Center history buff for many years, chronicled the beginning of a Christmas tradition in our community. According to Mr. Lange’s article, Dr. Henry Wolthorn moved into a home on Bunker Hill Drive in April 1967. At that time, North Lake had been dug and a seawall was in place, but the lake was still dry. By 1968 the lake was filled with water, and Dr. Wolthorn presented the idea of lining the lakeshore with luminaria during the Christmas season. He had seen such a display on a visit to Mexico and was impressed by it. The North Lake Homeowners Association liked the idea and appointed Dr. Wolthorn chairman of a committee to work out the logistics. That first display was at Christmastime of 1968 and was the beginning of an annual tradition. Candlelight continued to ring the lakes and glow down the length of Allegheny, Fort Duquesna and elsewhere for many years.

Three tips to increase vegetable production in the home garden