The show goes on at Riverview High despite COVID-19 setback 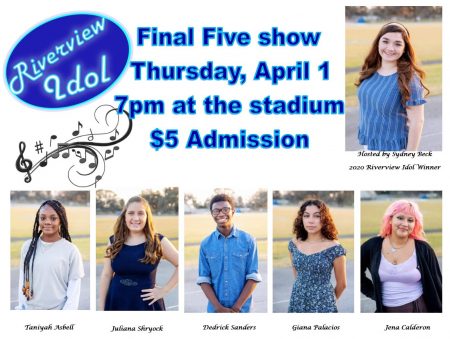 The show goes on at Riverview High despite COVID-19 setback

As they say in the theater, “The show must go on,” and so it has at Riverview High, with special performances planned this month and next.

But first, a shout-out to music teachers and students throughout the school district of Hillsborough County, whose school board earlier this month affirmed March as “Youth Art and Music in Our Schools Month.”

“Research shows improved academic progress and success when it comes to the ability to learn music and to perform music,” said board member Melissa Snively, who, in addressing the proclamation at the March 9 board meeting, noted that she has a child who plays the violin and a child who plays the saxophone. “It has really improved their academic performance.”

Snively went on to say that in light of the ongoing pandemic and related COVID-19 protocols, “It’s nice to see there are several schools creating events around music performance.”

That brings us back to Riverview High, set to stage the third and final round of the 15th annual Riverview Idol fundraiser, a booster for the school’s many choral activities. The final competitive round is being staged Thursday, April 1, outside in the school stadium.

Also set to be performed in the coming weeks are two musical theater productions from Riverview High Theatre Troupe 5894, Edges and Rent. The shows, however, will not be performed in the Daron Hawkins Theatre, named posthumously for the school’s charter theater teacher, who laid the groundwork for Riverview’s award-winning theatrical program.

Hawkins died in 2013 after a long illness, five years after Riverview first opened.

Rather, in keeping with a long history of theatrical excellence, the shows Edges and Rent are set to be staged outside, on the field between the main office and auditorium. The shows are directed by Riverview theater director Casey Vaughan, who graduated from Riverview in 2009 and is a former student of both Hawkins and Stewart. Show dates are 7 p.m. March 25-27 for Edges and April 22-24 for Rent.

Masks and social distancing are required for all Riverview High productions.

These shows follow a tough year for performance groups, due to COVID-19 protocols being in place for a year now. Still, the show went on, albeit in a different manner, as evidenced by a Riverview High School Musical Facebook post from August 2020 about the musical, How To Succeed in Business Without Really Trying.

“The cast, crew and pit orchestra worked hard this year to prepare only to have to cancel the show weeks before our performances,” reads the post. “In June, some of our cast came back to record this compilation of songs from the show. Thanks to all who were a part of the musical this year.”

The virtual performance is still available at the RHS Musical channel on YouTube.com.

Chorus teacher Liz Stewart said she has had to stage her concerts outside in the school’s amphitheater, near the gym, with her performers both masked and socially distanced while they were singing. Audience members were required to follow the protocols as well.

For the first two rounds of this year’s Riverview Idol performances, Stewart put to good use the portable stage donated by the Riverview Woman’s Club in January.

Since its establishment in 2012, not counting the pandemic year of 2020, the woman’s club has hosted a holiday luncheon featuring Riverview High’s musical groups.

“We’ve gotten really creative with COVID,” Stewart said. “This year we did a virtual performance for their holiday luncheon and they were still very generous with their donation for our program.”

Stewart is the force behind Riverview Idol, which is down to five finalists: Taniyah Asbell, Jena Calderon, Giana Palacios, Dedrick Sanders and Juliana Shryock. Hosting the idol is Sydney Beck, a former winner.

Stewart noted that many Riverview Idol winners have gone on to sing professionally.

Riverview Idol has evolved into three rounds of competition. Round one involves up to 25 contestants singing for three minutes each. At then end, audience members are asked to select their top 10 favorite performances, which lessens the effect of votes based on pre-show favorites.

“People are going to come to support somebody they know, but they have to pick nine other performers they like as well,” Stewart said.

In round two, performers are paired randomly in groups of two. “You might have a Disney singer paired with a gospel singer, or some other uncommon combination,” Stewart said. “You mix up these people who would never sing together, and they get real creative how they come up with a solution to showcase their talent and ability.”

In round two’s first act, the singers perform in the randomly selected pairs. In the second act, they sing solo, with the three judges giving their feedback. At the end of the night, audience members select their top five performers, which leads to the final round of competition

Stewart gave a shout-out to her dear friend, Josie Costa, a community volunteer who for years before her death aided in the efforts to run the Riverview Idol fundraiser.

“Josie did this with me for 10 years,” Stewart said. “This was our project together. She helped me organize it. She was the outside person who kept it real objective. I appreciate every minute that she’s ever donated of her time to help me put on Riverview Idol and the annual Vocal Valentines fundraiser. Whatever I needed to make sure that the show went on, Josie was there to get it done.”

What to do for conservation