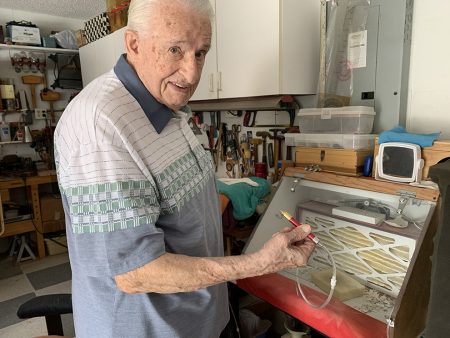 Standing in his garage workshop, Sun City Center resident Bill Johnson holds a high-speed dental drill, which he uses to carve the design on an ostrich egg shell and remove any pieces of it he doesn’t want.

Bill Johnson’s home in Sun City Center is filled with eggs, but they’re not the raw ones you put in the refrigerator. These are beautiful egg shell carvings, and he’s done so many of them over the years, they’re displayed in almost every nook and cranny.

The 86-year-old widower and Ohio native has been involved in some form of art his entire life. After studying commercial art and drafting, he moved on to silk screening, printing and lettering as an avocation. His daughter-in-law got him interested in pysanky, the Ukranian art of decorating eggs with wax and dye.

“I became familiar with a man named Gary Lamaster online, who lives in Iowa,” Johnson said. “He inspired me to begin carving ostrich egg shells and instructed me how to do it.

“I’ve been doing them now for the past 15 years,” he said, smiling. “My wife could have cared less about them. She liked how they looked, but eventually there were so many she became oblivious. (He estimates he’s carved 150 to 200.)

Ostrich egg shells are very hard, durable and thick, averaging .07 inch. They include three different layers that vary in structure and thickness.

1. He dips the egg shell in Acid Magic, a product used in swimming pools, for two minutes to remove its shiny finish;

2. Johnson then measures its circumference and diameter and draws an intricate design on it;

3. Next, he carves the design with a dental drill at 400,000 RPM and removes the pieces of shell he doesn’t want;

4. Finally, he soaks the shell in bleach from two hours to overnight, which dissolves its inner membrane and cleans the outside of any ink left from the original design.

He said he uses different burrs on his drill for creating different shapes, cutting, smoothing, sanding and polishing.

Johnson gets his ostrich egg shells from suppliers in Scurry, Texas, and Middlesex, N.C.; they drain and sanitize them before shipping. The cost is $20 per egg, plus shipping.

His designs come primarily “out of his head,” he said. “I’m always looking for something new to adapt to my designs.”

“To do this form of artwork requires a variety of skills, some of which are technical in the meticulous layout of the overall design and then the delivery of that design onto the egg shell,” said De Stjil Art Gallery co-owner Wolf Spring. “Finally, the actual carving of the design, depending on its intricacy, might take up to 50 hours overall. The slightest slip up and all is ruined, so a steady hand and a patient nature are both required.

“As an engineer, he sees order and balance in the designs he creates, so it really allows all of his talents to work together,” Wolf added. “It is hard to believe, but this artform dates back 60,000 years to South Africa, where examples have been found. 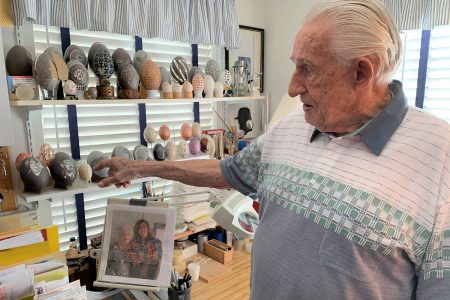 At right, Bill Johnson, 86, points out some of his earlier eggshell art work displayed in a room in his Sun City Center home. 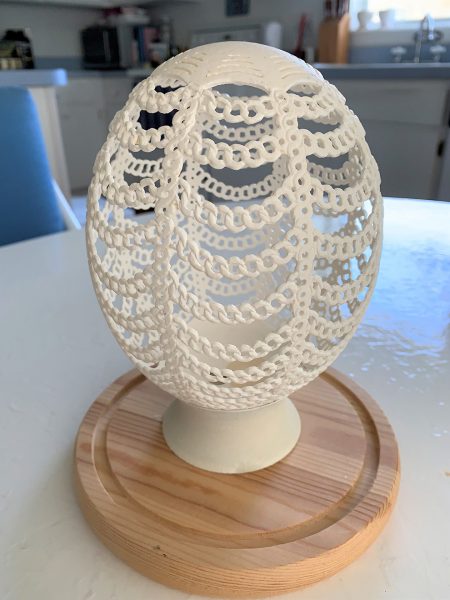 LOIS KINDLE PHOTOS
This is an example of an intricately designed and carved ostrich egg shell Bill Johnson creates. He estimates he’s done between 150 to 200 of them. 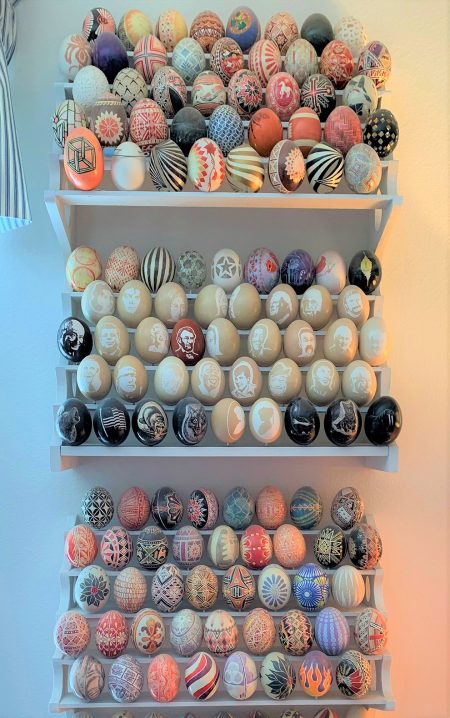 Bill Johnson’s pysanky artwork involved using brown chicken eggs, like these, that he waxed, dyed and then drew on meticulous designs, using a small tool called a kiska. Eventually, he changed to working with larger eggs: duck, goose, Rhea and Emu. 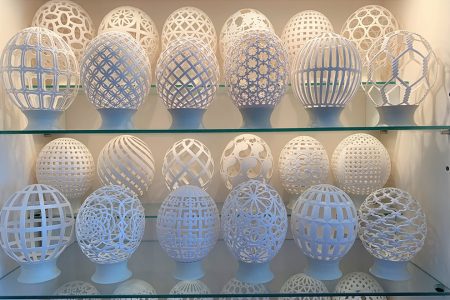 LOIS KINDLE PHOTOS
These are but a few of the beautiful art pieces created with ostrich shell eggs by Sun City Center resident Bill Johnson. His work is currently being shown in the De Stijl Art Gallery in Ruskin. 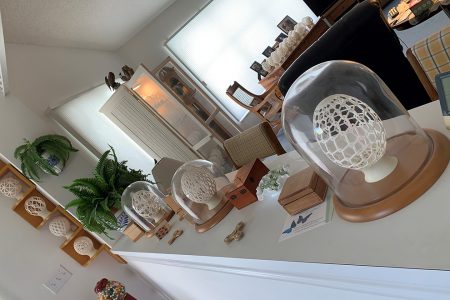 After 15 years of creating them, Bill Johnson’s various forms of egg shell art are displayed in every nook and cranny in his Sun City Center home. 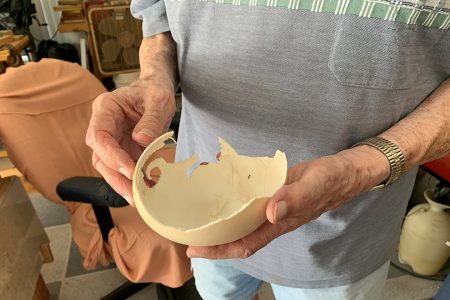 Bill Johnson holds a large piece of broken egg shell to show how thick it is compared to other birds’ eggs. 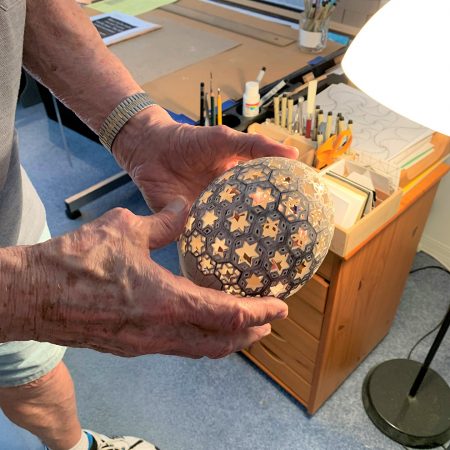 Bill Johnson shows a design he drew on an ostrich egg that didn’t quite work out.