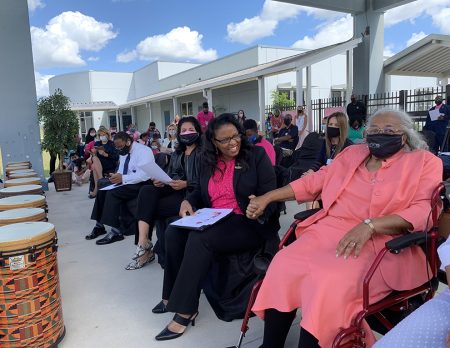 The community came out in force to celebrate the 94th birthday of a trailblazing woman whose name adorns Doris Ross Reddick Elementary on West Lake Drive, in the small agricultural town of Wimauma.

Wheelchair bound and sharp as a whistle, Reddick, at the school March 11, accepted the accolades of many, from the boys and girls in kindergarten on up through the ranks of teachers and school district officials, including Superintendent Addison Davis and Jennifer Dames, the school’s newly appointed principal.

“I’m certainly humbled to be here at this school,” Dames said, as she waited for Reddick to arrive at the school Dames was appointed to lead just two days earlier. Reddick Elementary opened in 2008, named for the first black woman to be elected to the Hillsborough County school board and to serve as its chair. Reddick served three four-year terms, from 1992 through 2004.

“The children here are amazing,” said Dames, whose 20-year career started as a middle school science teacher in Jacksonville, Florida, and included stints as an assistant principal at Seminole and Foster elementary schools.

Reddick Elementary enrolls “some of the kindest students I’ve ever come across,” added Dames, who followed in her mother’s footsteps as an educator. “They have hearts of gold. They really value education, and they want to achieve.”

And so it was for Reddick herself, who remembers to this day the impact her second-grade teacher, Emma Wilson, had on her life as a young student. Reddick would go on to graduate high school at age 16, encouraged in her studies by her mother who was a teacher, and who also has a school named in her honor.

In keeping with a family tradition of trailblazing efforts, Reddick’s daughter, Clemmie C. Perry, who learned to play in golf in 2013, one year later founded Women of Color Golf and Girls On the Green Tee. She announced at the March 11 ceremony that Reddick Elementary, with WOCG/GOTG-T support, would be offering a school-based golf program for the students at Reddick Elementary. 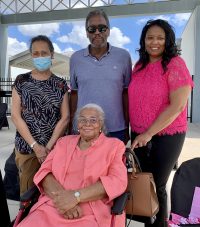 Doris Ross Reddick, seated, with her son, Ross Perry; daughter, Clemmie C. Perry, right; and daughter-in-law, Phyllis Reddick. Not pictured is her son, Kenneth Perry, who was at the event.

“As little girls you were never allowed to play on the golf course,” Perry told her mother. “Today marks history for the golf program at Reddick Elementary, where generations of little girls will learn to play golf.”

A proclamation for Reddick, signed by Dames, notes that the nonagenarian began her career as a substitute teacher in 1947 and worked also as a full-time teacher, reading specialist, educational diagnostician, curriculum coordinator for early childhood learning centers, Head Start teacher trainer, college lecturer and more.

Reddick was instrumental in establishing the school district’s office of supplier diversity to ensure fair-bidding practices for minority vendors. Annual minority business allocations rose “from a meager $1,084 to millions,” according to the proclamation, which states Reddick was instrumental in re-establishing Blake and Middleton high schools, “built by minority contractors.”

The proclamation describes Reddick’s deep love for her family and declares March 13 to “forevermore be recognized as Doris Ross Reddick Day at Reddick Elementary School.”

Reddick at the March 11 ceremony, two days before her birthday, was asked to assess the secret to living a long life. She advised to “just be yourself.” And in recognizing the needs of others, to “do something about it.”

She said she expects of all teachers to “just remember what you’re here for.” Its “not just a paycheck,” Reddick said. “In fact, not a paycheck at all. The children are the [cause].”

In attendance were school board members Melissa Snively, Henry “Shake” Washington and school board chair Lynn Gray, who told Reddick, “the heart that you have plus the leadership you gave resonates throughout every one of us [today].” 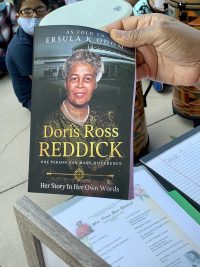 A copy of “Doris Ross Reddick, One Person Can Make a Difference,” her story in her own words, as told to Ersula K. Odom.

Perry, in attendance with her brothers, Ross and Kenneth, noted in her remarks that Reddick as a fifth-grade teacher taught Dorothea Edgecomb and former state Sen. Arthenia Joyner, the first black woman to practice law in Hillsborough County. Edgecomb would become the second black woman elected to the school board and also served as its chair.

Davis said Reddick “lived with grace and professionalism” and put children and the community first in every decision she made. He celebrated Reddick’s trailblazing work “for every woman in Hillsborough County” and said that it would never be forgotten that Reddick punched in her “timecard every single day to create magical moments for every child.”

On hand to entertain Reddick were children across all age levels, with musical performances, the pledge of allegiance in English and Spanish and the reading of her biography from second-grade dual-language students.

It was a day as good as it could be, which was fitting for the lifelong educator, whose printed program quote attests to the same. “We cannot change yesterday, that is clear, or begin with tomorrow before it is here,” Reddick’s quote reads. “So all that is left for you and for me is to make today as good as it can be.” 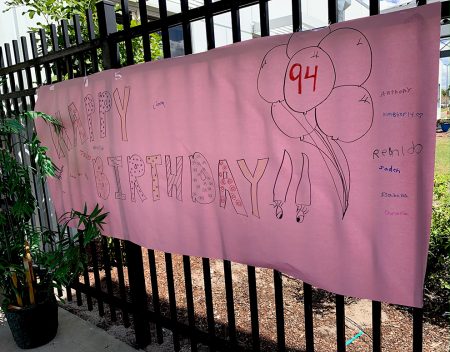 A hand-created sign by students at Doris Ross Reddick Elementary School, in tribute to the 94th birthday of the school’s namesake. 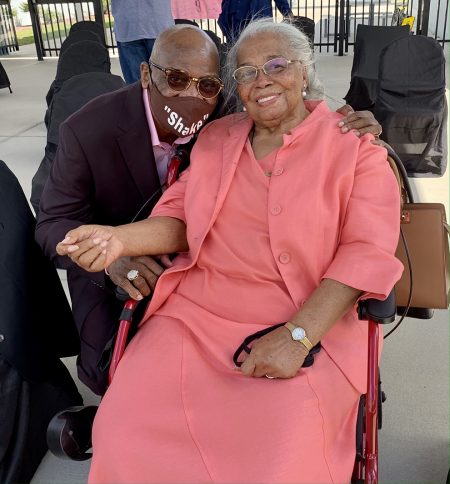 LINDA CHION KENNEY PHOTOS
Newly elected school board member, Henry “Shake” Washington, takes a moment with Doris Ross Reddick, who as a school board member pushed for the reopening of a newly constructed Middleton High School, which Washington served as its charter principal. 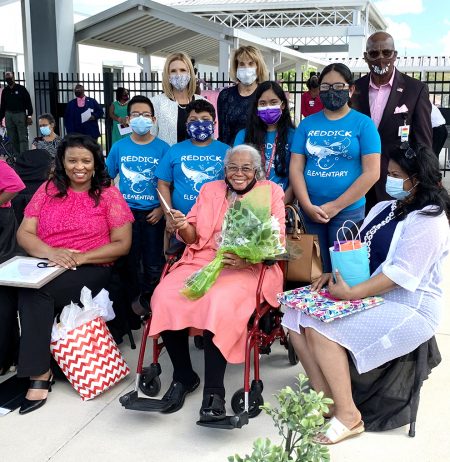 With Hillsborough County school board members Melissa Snively, Lynn Gray and Henry “Shake” Washington in the back, Doris Ross Reddick holds flowers and smiles for the camera in a posed shot with Reddick Elementary students; her daughter, left, Clemmie C. Perry; and her caregiver, Iris Diaz. Reddick was the first African American woman elected to the school board and the first black woman to serve as its chair. Snively is a past chair and Gray the newly seated chair. 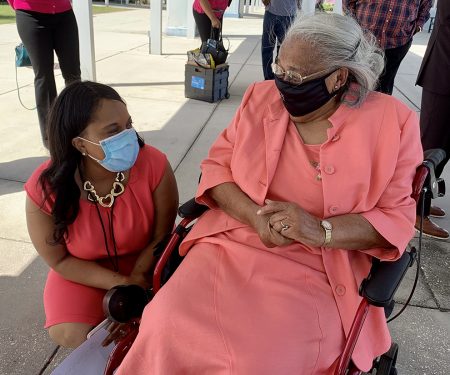 Two days after being appointed to lead Doris Reddick Elementary School, principal Jennifer Dames takes a moment to have a one-on-one conversation with ther school’s namesake. 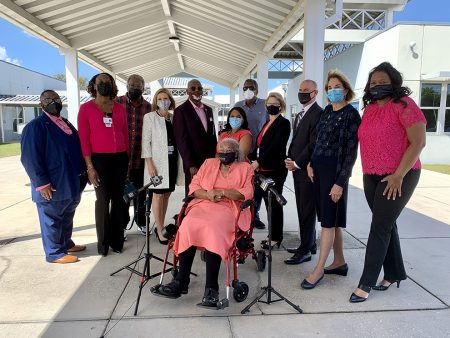 LINDA DHION KENNEY PHOTO
Doris Ross Reddick takes center stage at the school that bears her name at the March 11 celebration in honor of her 94th birthday, March 13. Among those gathering in her honor are her daughter, Clemmie C. Perry; her sons, Kenneth and Ron Perry; the school’s newly named principal, Jennifer Dames; her husband, the Rev. Dr. Glenn Dames; school superintendent, Addison Davis; and school board members, Lynn Gray, Melissa Snively and Henry “Shake” Washington. 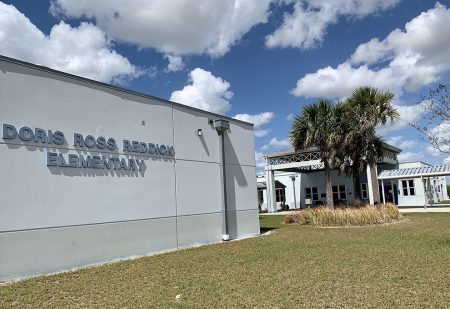 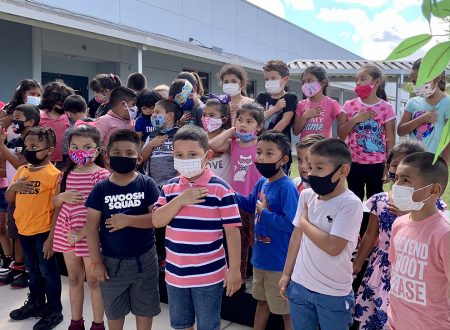